Oft described as the most beautiful castle in South Tyrol, Schloss (Castle) Wolfsthurn was high on our list during our recent South Tyrol trip, given that it was a mere stones throw from our base in Vipiteno. 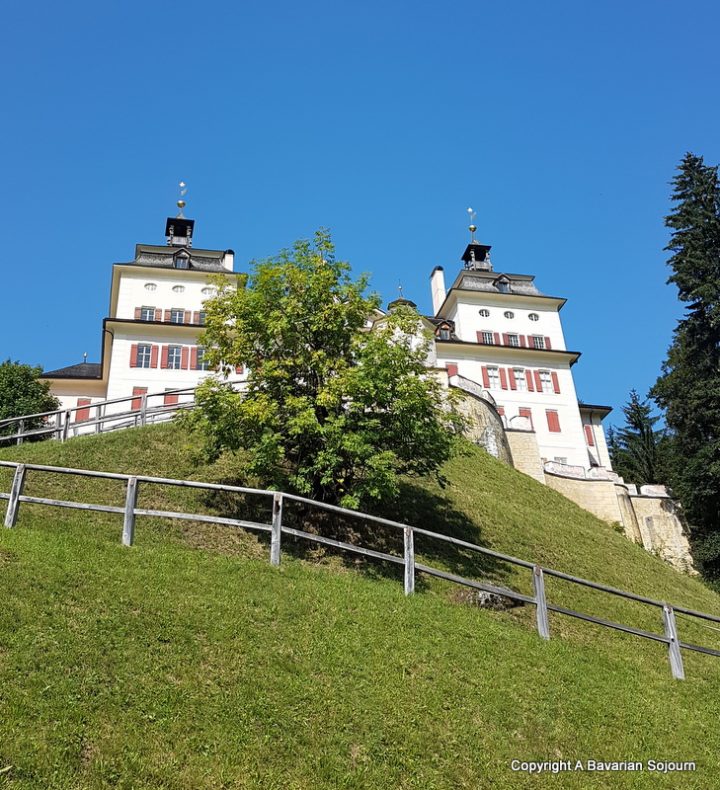 Although the theme of this particular museum might not sound all that inviting, this Baroque castle enticed us from afar, perched high upon the most picturesque hillside above Mareit.  You could actually visit for the stunningly restored Baroque rooms alone  (it’s not that often that you visit a place with 365 windows after all is it?  As many days of the year was a theme apparently popular at the time!), and bypass all of the hunting and fishing themed stuff and still get a sense of a day well spent – but the rooms we did visit covered such topics tastefully, and were much more about the history of alpine traditions in this area than modern-day hunting and the like. 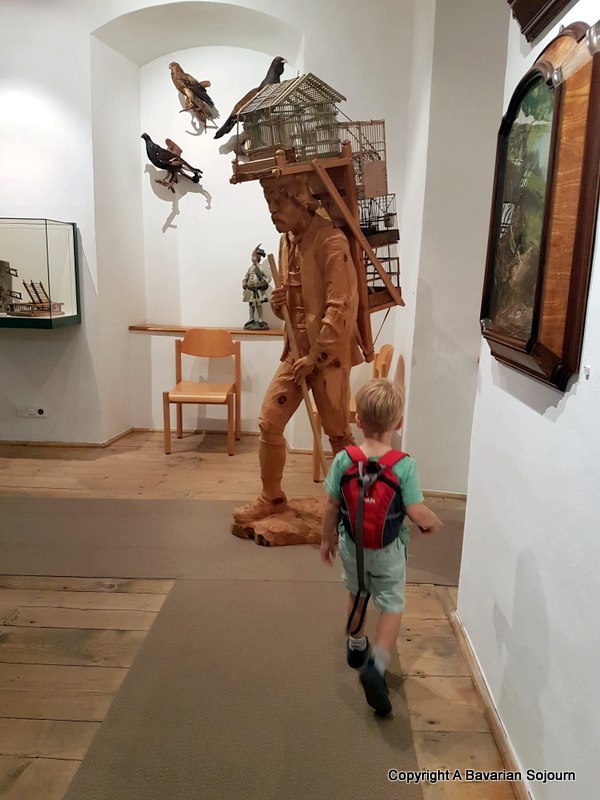 Watch out for the figure of a man covered in bird cages.   We couldn’t work out whether he was a hunter, or a seller or he just liked to take his pets out with him (or indeed all of the above!) – he just didn’t look all that comfortable.

It’s not all about the hunting and catching of creatures here either, there are various dioramas where you can learn all about local wildlife that were quite interesting.   Whilst Mr R closely inspected the ancient fishing flies on display in one room, we learned about the varieties of fish that frequent the crystal clear rivers nearby – and secretly I thought there were worse places to be a fish, even if you do get hauled out and cooked before your prime! 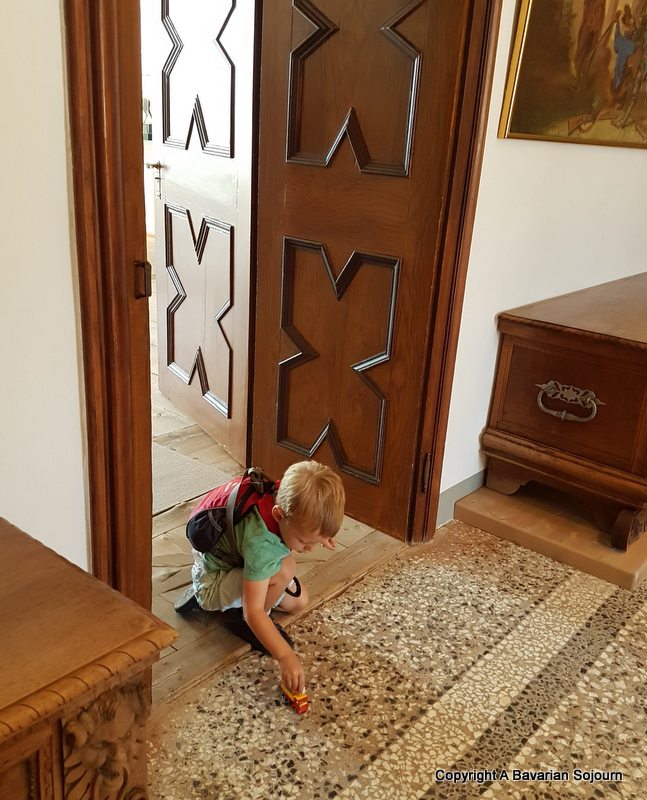 We also met the two bears and completed that story line (see picture at the top!), said hello to a former wolf (with no sign of Red Riding Hood in the vicinity), and whilst the smallest member of our party enjoyed the various textures of the castle floor for a quick “car adventure” or two (there’s always a car or three in the bottom of my handbag nowadays!), I spent a very happy ten minutes gazing out upon the most magnificent view from a window I think I have ever seen in my entire life. 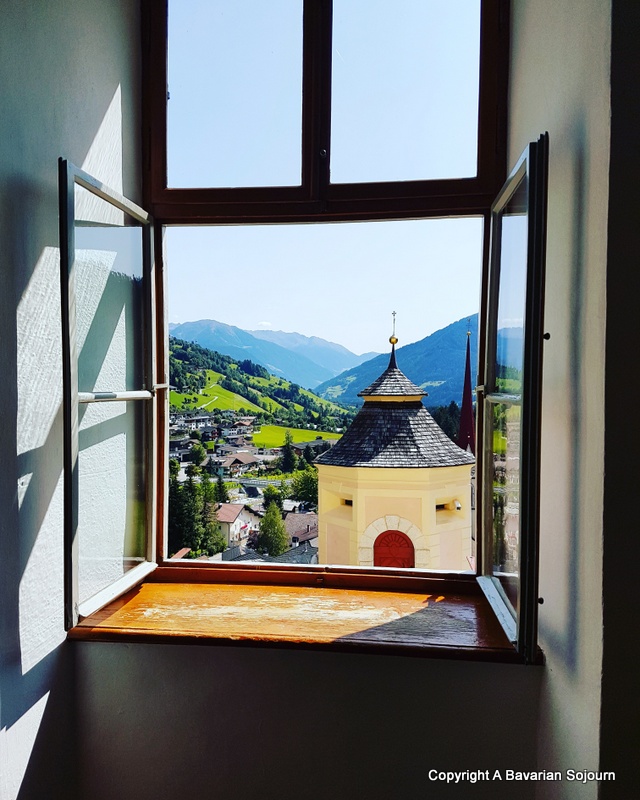 This particular view can’t really have changed much since it was built in the 13th century as a home to the officials to the Counts of Tyrol (the castle went to the present owners – the Von Sternbach’s in the 18th century)…   It’s also home to the most exquisite Baroque ballroom, described by the small girl as like a giant beautiful fondant fancy – and I could kind of see what she meant… 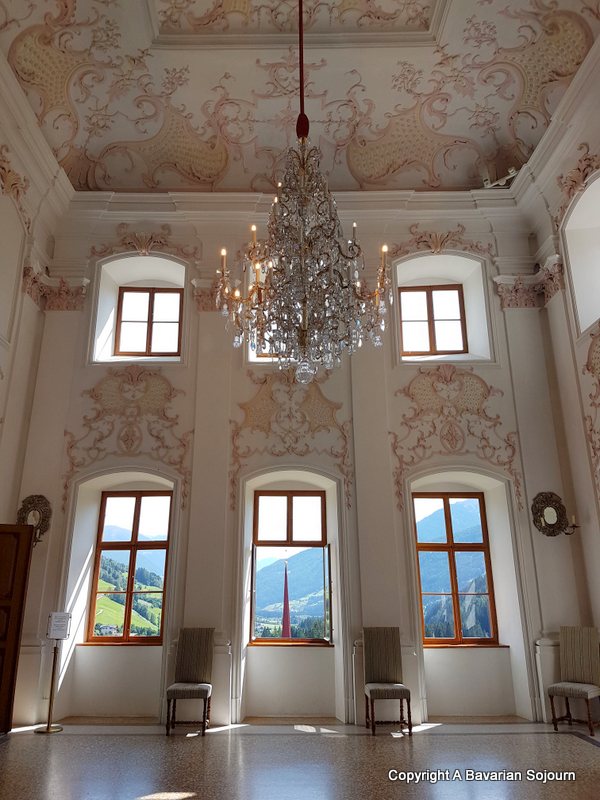 The castle is also absolutely crammed to the rafters with art and furniture that carry a hunting theme, which makes for more than a few weird and wonderful paintings and exhibits, like a room filled entirely with furniture made from giant antlers.   Give the room’s occupants a few drinks, and it’s entirely possible that the creatures that once owned the antlers could get their own back with the amount of sharp pointy bits going on! 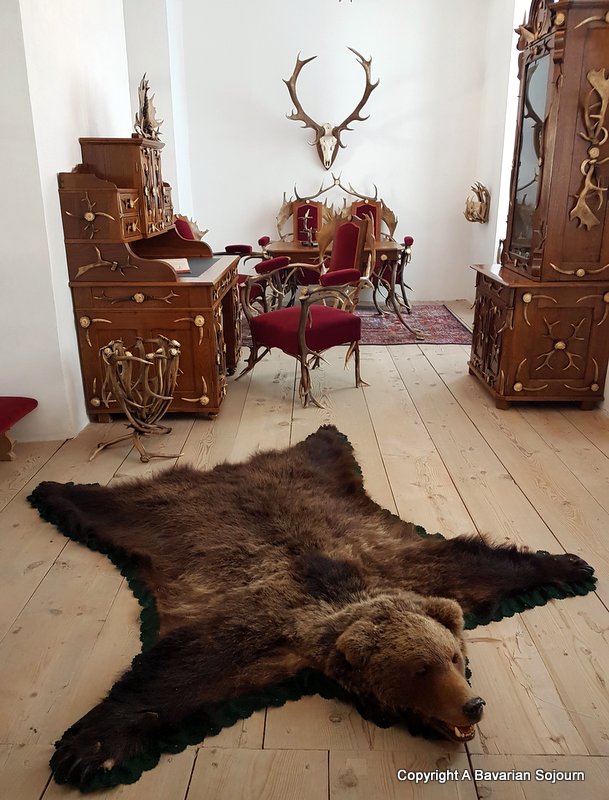 The antler theme continued down to the depths of the castle cellar, where alongside a game that tests your knowledge on local wildlife (and Deutsch – it’s sadly not in English, but you can well get the gist without it!), another room is completely devoted to a kind of giant Antler jigsaw – charting the various growth stages throughout the life of a deer, complete with lights that pop up to tell you whether you are correct or not!   I can easily say I don’t think we will ever find another puzzle quite like it! 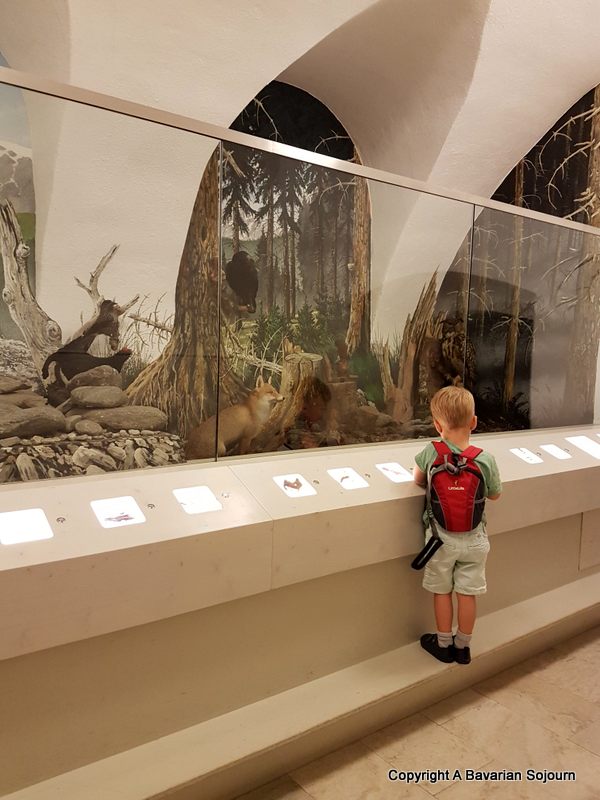 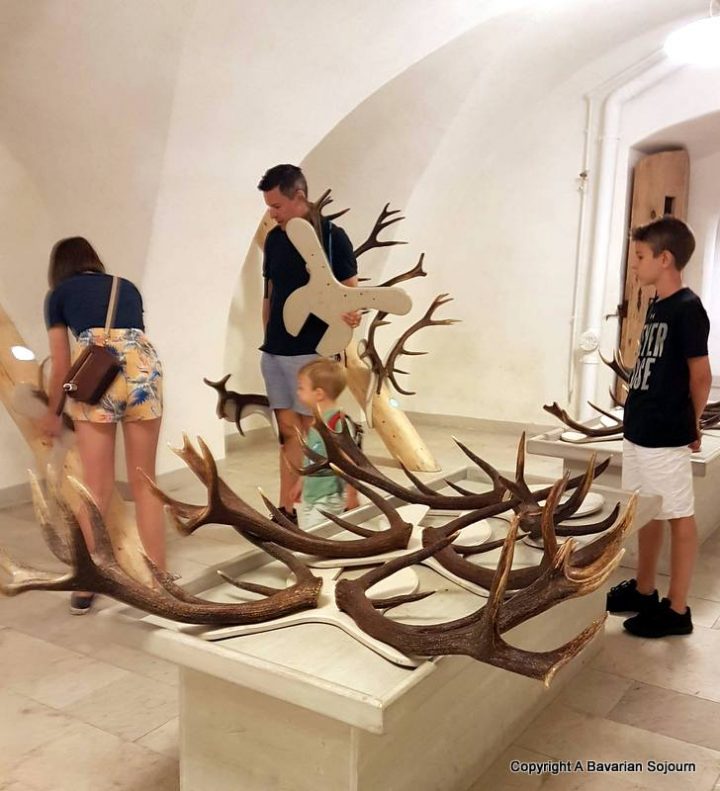 I have to say though that by far my most favourite aspect of Castle Wolfsthurn has to be outside on the Wald und Wasser (forest and water) trail, in the depths of the forest far beneath the castle (it’s also surprisingly pram friendly!), which you could choose to visit for free entirely separately should you wish.

This stunning trail teaches children about the flora and fauna of the region far more than any museum exhibit, by them actually being in the environment.

The 1km trail (which you could extend yourselves!) includes such delights as the giant tree telephone (explaining how sound can travel through tree trunks), stepping-stones in the middle of an alpine stream, amazing listening points (which I will admit to thinking were alpine toilet cubicles at first), where you could hear what it sounds like inside the heart of a tree, or listen to the water running deep beneath the ground in another.    We also bravely inspected the wolf pit (which was empty thankfully – but it’s a species making a return to these parts!), and had a go in the long jump pit that taught us how far forest creatures can jump. 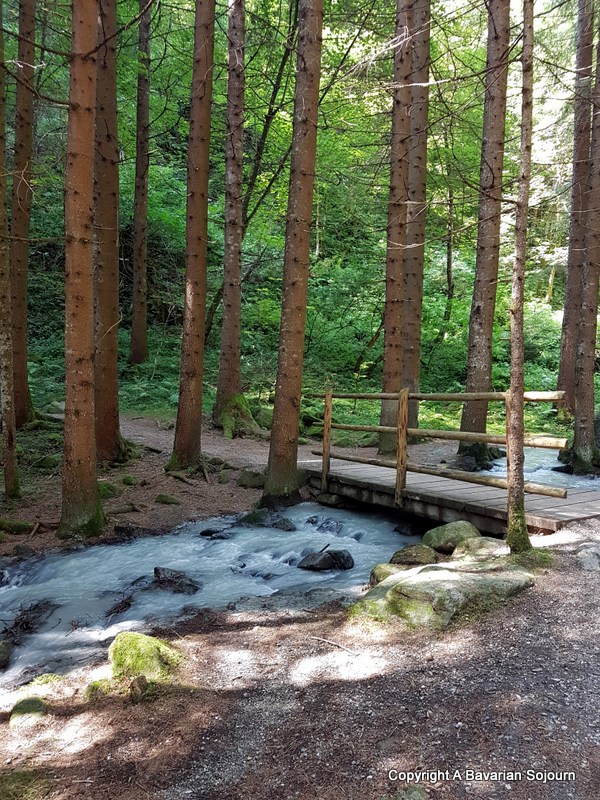 This was the perfect place to let off a bit of steam after a museum visit, and also ended up being a highlight of our entire trip. 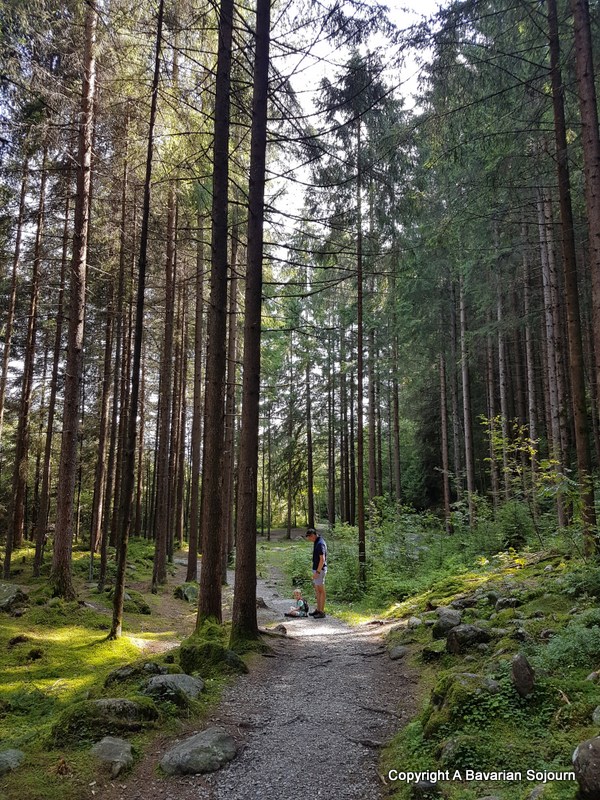 We can recommend the pizzas in the little restaurant near the car park, and you must peep inside the ancient chapel opposite if you have time!

All in all a real must visit…