Father’s day took place on May the 9th in Bavaria.   A day (according to my German teacher) when Bavarian Fathers are given spousal permission to indulge in their passion for beer and motorbikes (although hopefully not together!), and it usually coincides with the first days of better weather.   I said usually.

Mr R doesn’t have a motorbike, but the Small People did work hard to produce specially written cards and letters at school.     Small Boy produced a particularly detailed card, complete with beautiful writing that proclaimed his love for his father in German no less (which always makes me laugh).    Mr R particularly touched, told Small Boy how much he liked his card, and that he would keep it forever.   Small boy said he was especially pleased about that, as he and his close friend (of the same name) had decided to do each other’s Father’s Day cards this year.  Not quite so special after all! 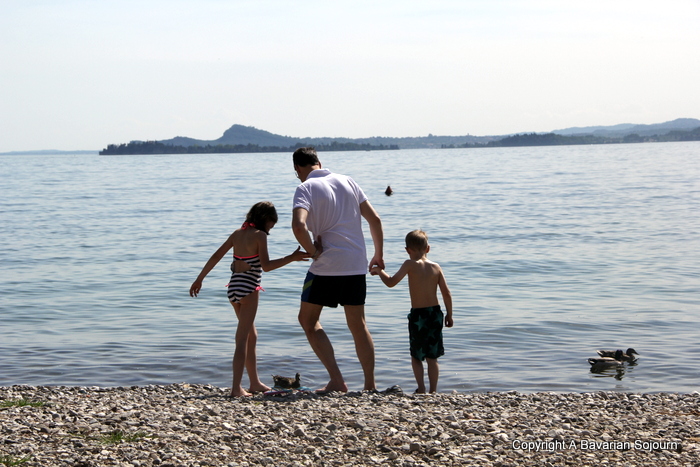 Although he is not going to thank me for including it, the picture above was actually taken on Father’s Day when we were in Italy, and it just about sums up how I feel about Mr R’s parenting skills – determined, incredibly caring and quite hilarious.    I am sure that next year he will be hoping for a day on a motor bike, but he might just have to settle for the beer part…  It’s been a testing couple of weeks what with natural and not so natural disasters,  and I wanted to take this opportunity to say how much we love him, and what a great job he does…   We have a huge adventure just around the corner, and although I highly doubt he will, I do hope he gets the rest he deserves at some point.

And to make up for the UK Father’s Day that I missed last Sunday, I am so looking forward to spending a few hours with my own Dad this weekend, another father who is determined, caring and hilarious (can I add stubborn to that list too?) on a flying visit home…   I know he will be happy if I import one of those German Father’s day traditions – preferably the beer side of things!