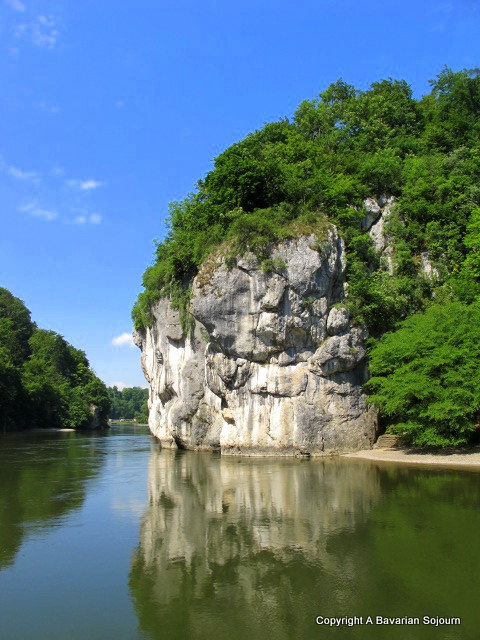 Saved from an arduous walk by a friend who had dropped a large bottle of shampoo on her foot that very morning and couldn’t actually walk – a couple of us broke away from the group we had travelled with (and had planned to walk to our destination with – honest!), and instead took the vastly easier option of sailing down the Danube to Weltenburg Abbey, home to the oldest monastry in Bavaria.

After some discussion as to whether we were on the correct boat, a little like the journey in Charlie & The Chocolate Factory, we floated on not quite knowing where we were going…  Past strange rock formations, through vividly green waters (I thought the Danube was supposed to be blue?!), listening to tales of dangerous currents, narrow gorges and near-disasters in times gone by.  And believe me, it is quite some current – what was a 40 minute journey on the way there, was easily halved on the way back.

Whilst the boat option was definitely cheating, it was a nice kind of cheating, and we felt quite spoilt with the with coffee and pretzels on tap…   In fact, I felt quite guilty when I thought about the rest of our group tackling the  walk to the Abbey, but as I was unprepared for such an ordeal in any event (without water, sun cream or suitable walking shoes) that guilt was admittedly fleeting, especially when we sailed past them perched high up on a rocky outcrop.  No-one had ever mentioned that part in the planning!

So we, The Deserters relaxed, caught the sun, and took in the scenery.  Until eventually we turned a corner to be greeted by this…. 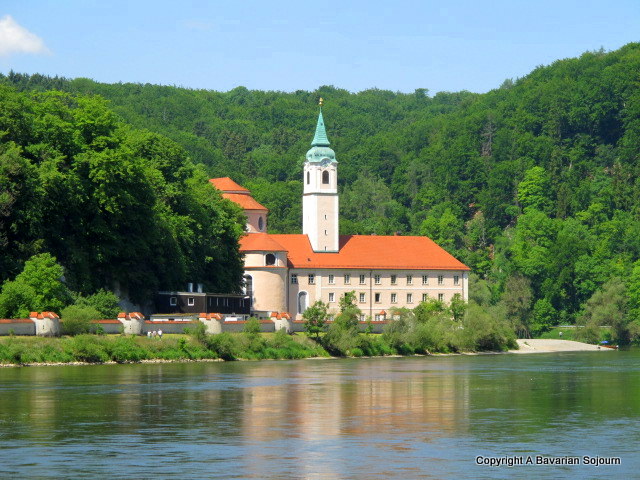 The boat spits you out just as you are beginning to hope the journey lasts for the rest of the day.  But never fear, you can soon put your feet up again!  After a quick walk to the entrance of the Abbey you are greeted by an incredibly picturesque bier garten, roofed with ancient chestnut trees providing generous shadows.   Perfect for whiling away the hours under on a hot day I would say!

The staff here are cheery too, and who can blame them?  I think I would be if I worked in such surroundings.  Did I mention it is also thought to be the oldest monastry brewery in the world?   Of course we sampled one of the monks ancient brews with lunch as it would have been be rude not to, and I am happy to report that after hundreds of years they are indeed expert brewers – the beer was beautiful, and that’s quite a statement for someone not usually fond of dark beers.

After a hefty Bavarian lunch with the rest of our party who turned up 45 minutes later, and (unlike us) had earned every calorie, we had time to look inside the spectacular Abbey (look out for George & The Dragon in here!), before the return leg. 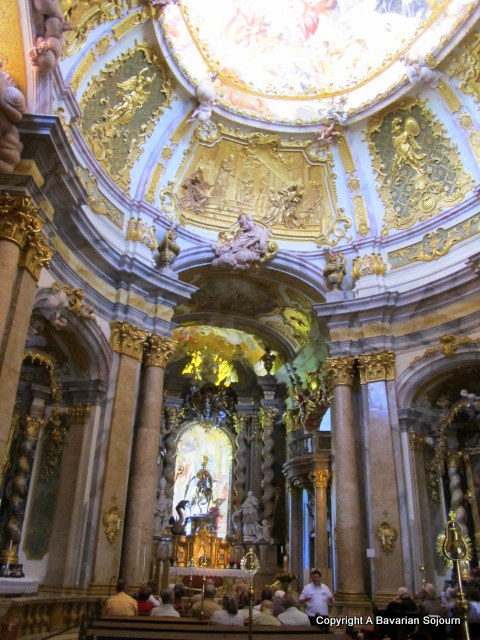 The journey back was uneventful apart from a swift karate chop to my neck by a friend who claimed she had spotted a fairly hefty spider passenger upon my person.  But nevertheless I was grateful.  I always am for days that make you think you are on holiday!  May there be plenty more to come….