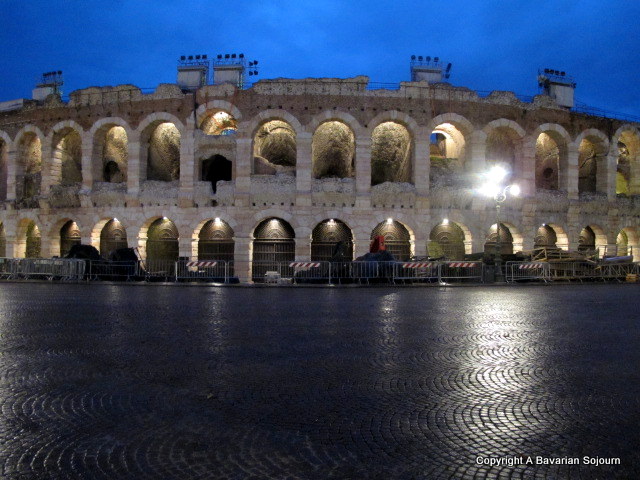 Wanting to make the most of the last of the Easter hols, we drove down through the breathtaking Brenner Pass to spend a few days in Verona (and a day in Venice which I will write about later!), a city full of history, legends, and very regal marble streets.  It is also twinned with Munich coincidentally.

I can’t say that the weather was that kind to us while we were there, and we could have done with an ark at times.  Not that we let that put a dampner on things(!), after all there was plenty to keep us occupied – like going for long leisurely lunches for example.   I would recommend the family run restaurant La Greppia for such a meal.   While the rain gave the city a good rinse outside, we had a lovely lunch, and the Small People were kept occupied for ages with what might have been the biggest plates of Spaghetti in the world (and a promise of a visit from the amazing dessert trolley for continuing good behaviour – wise Veronese parental tactics  obviously!)!

It is great for food, and there are plenty of dishes we hadn’t come across before.    It puzzled us what a strange sounding “dankki” sauce could be that waiters kept telling us about, until it dawned on us that it was donkey – a specialty of the region, served in a sauce not unlike bolognese.    Instead I usually opted for another regional speciality, pumpkin ravioli in a butter sauce with  parmesan, which was sublime!  (We found that the roads behind the Duomo are particularly good for good Trattorie and Osterie away from the madding crowd.  But if you’re too busy exploring you can always grab a panzerotti on the go, or a slice of pizza or bruschetta from the numerous shops dotted about).

Verona is of course also home to the story of Romeo and Giulietta.   If your heart desires, you can fight your way through and admire the balcony where people like to imagine that Romeo courted the lady herself.  And if you are really searching for love, you might try a quick rub of her breast – she’s there in statue form and apparently doing this brings you luck in the love department (if not making you look slightly debauched).   There’s another Juliet statue in Munich (I had wondered who she was), just by the Toy Museum.  I walked past her earlier today and I noticed that she also has one slightly shiny boob too! 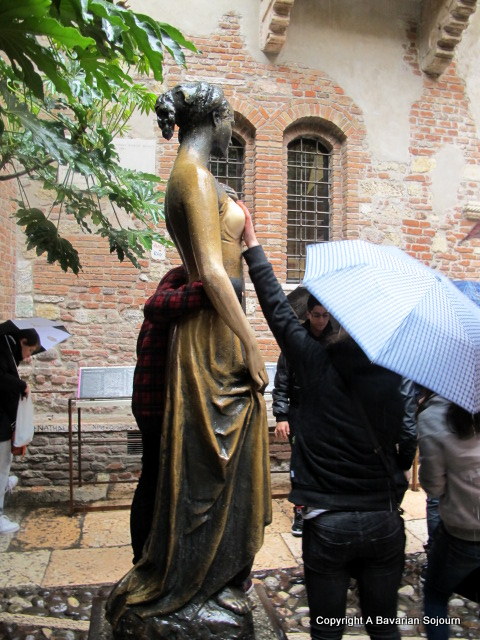 Apparently thousands of lovelorn folk write letters to Juliet in Verona each year, and an army of volunteers take the time to reply.   I would love this task, and would respond in appropriate mediaeval Marje Proops style… I would even colour the paper with cold tea and burn the edges and everything to make it look authentic, and give incredibly helpful advice like “Pray thank thee for thy letter.  Verily it is so, that a bit like your love life, it happens that I probably didn’t exist.  I thus pray you venture out and start enjoying yourself – let love find thee.  Adieu, Juliet“…

What with letters and breast-rubbings, the poor girl doesn’t get much peace.   I bet she’s really cross about all the graffiti in her courtyard though, I know I would be (although the graffiti is now scrawled on panels that are replaced throughout the year).    My advice would be to visit first thing in the morning before everyone else is out of bed    But honestly, if you don’t see it, don’t worry too much.  There are lots of beautiful balconies in Verona, and you don’t have to look very hard, they are everywhere! 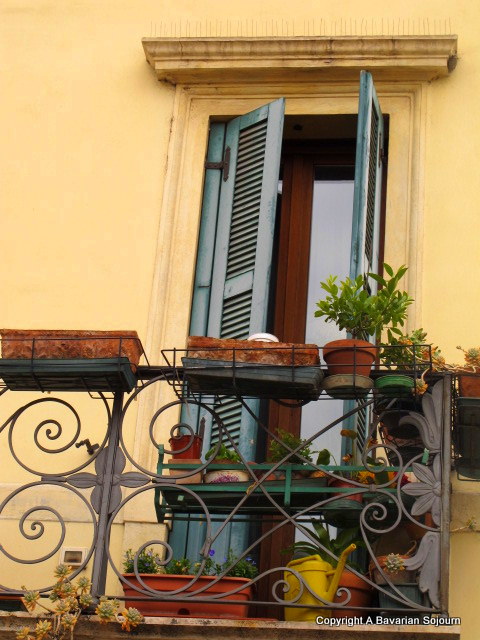 A small part of me thinks that a few locals don’t seem to be at peace with their city being a tourist mecca.   Of course we met plenty of lovely and friendly locals too, but we also encountered rather surly and indifferent people, which I found surprising as it hasn’t been my experience in Italy before.  From being snarled at by the woman on the ticket desk at the Arena when asking about the cost for example, to a couple of restaurant experiences that left us wishing we hadn’t bothered.  Then there are the signs everywhere insisting that they “don’t have MAPS OK?”.   This combined with a few street artists being overly aggressive with some poor naive folk not quick enough to cough up, it was a teeny bit depressing at times.    But then I guess you can hardly blame them for feeling slightly jaded with the flocks, it must be annoying at times…

Having said that, it is a gorgeous city, and you shouldn’t let our experience with a few grumps put you off (it’s not going to stop me going back).    And yes, some areas are busy, but you can visit the major attractions first thing in the morning (including the Arena, although bear in mind it stages huge operas and concerts throughout the year, so a lot of it might be taken up with scenery and chairs etc.) while everyone else is having breakfast.  Then cross the ancient bridges (there are quite a few to choose from!) and explore the more residential neighbourhoods.  This is where you will find the real Verona. 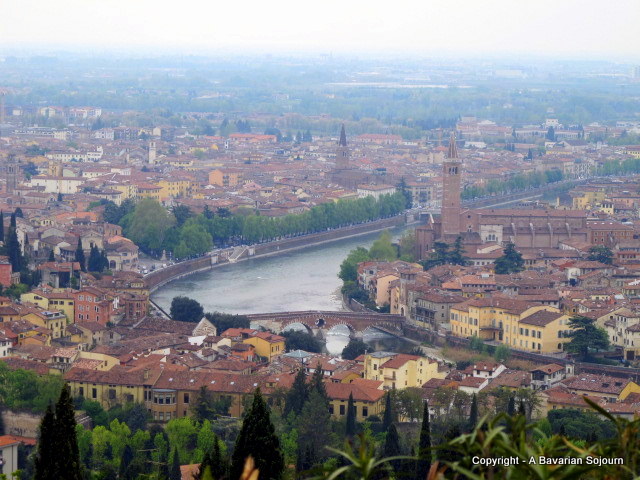 Take a walk (or a bus!) to the top of Castel San Pietro where you will also find the most beautiful vistas (even on a cloudy day), then find an enoteca and sample the beautiful local wines (I highly recommend the Amarone!).   Then kiss goodbye to any diet you may be on and head to the closest Gelateria to overdose on some of the most divine ice-cream imaginable.    Gelateria Savoia was probably our favourite!  At over 70 years old they have the recipes perfected, it’s definitely worth a visit (the picture above was from another gelataria, we went to a few!). 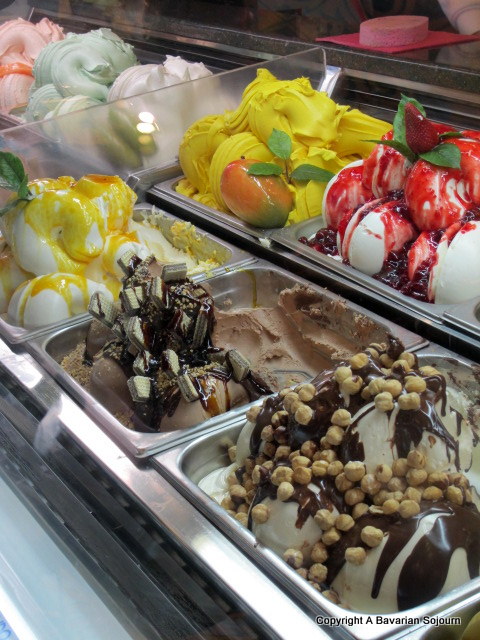 Verona is quite child friendly too.  It’s pedestrianised in a lot of areas so traffic’s not that much of an issue, and there are plenty of local children to play with in the various squares (under the watchful gaze of ancient statues)!  There’s a great playground at the top of a hill next to the Porta Nuova (the monument, not the railway station!) where we managed a couple of hours between downpours.   It also has a pizza restaurant in the grounds.

Both children can’t wait to go back, holidays are so exciting when you are small –  especially the staying in hotels part!    When we arrived, the Five Year Old inspected the room and announced that we would need to ask for another, as the bath was far too small.  It was the bidet! 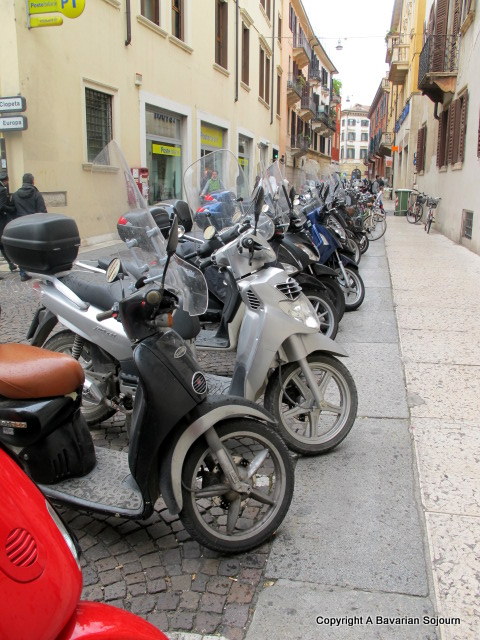