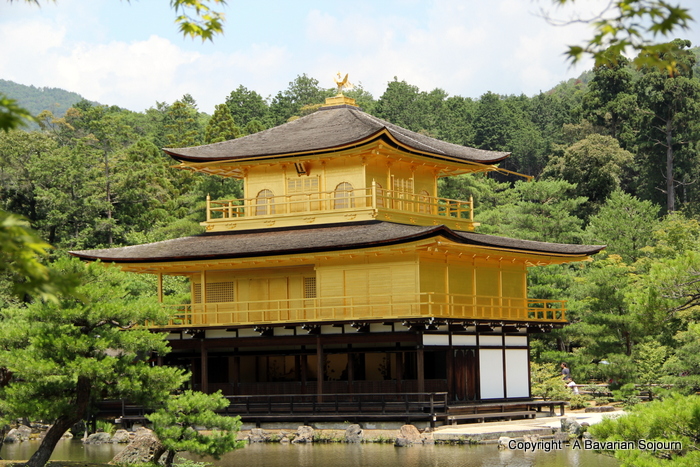 There seemed to be no end to Kyoto’s charm offensive.      We spent the following morning exploring the vast grounds of Kinkakuji –  the Golden Pavilion (thus called for obvious reasons), and apparently adored so much by one monk that he burned the original down – which does of course mean that this iconic building isn’t as old as it might seem.    As lovely as it was, I think my preferred Kyoto temple was actually Ginkakuji (Silver Pavilion – except it’s not) for its incredible gardens of the zen, moss and tiered variety.  From the tiny croaking frogs perched at the edge of ancient pools oblivious to us passing, to the glossy ravens that outpaced us slightly in the branches of the cedars overhead.  It all had quite an ethereal ambience.  So much so I was half expecting to turn a corner and find a unicorn, but sadly it was not to be…    The slightly surreal and dreamy feel to the afternoon was at risk of being completely destroyed shortly afterwards however when we got horribly lost, but thankfully we made it back to the Kabuki Theatre in time.  Small Girl and I had an appointment to keep…

Eager to continue our quest to find out more about Kyoto’s famous residents, I had emailed Peter Mackintosh a few days beforehand.   This lovely Canadian bear of a man has lived in Kyoto for almost 20 years, and is the font of all knowledge on the history and rituals of the Geisha way of life.   Not only does he seem to know every single person in the entire city, but he’s something of an ace photographer too, and both Small Girl and I learned some good photography tips along the way. 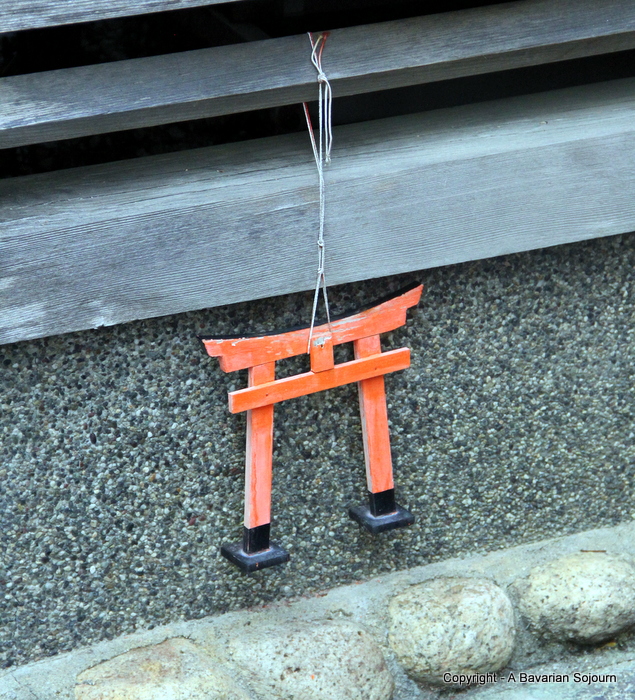 I loved that we learned about stuff that we would have walked straight past had Peter not pointed it out, such as the Maiko’s school timetables – packed full of music and dance lessons, and the tiny wooden orange Torii symbols hung strategically to ward off peeing dogs…      It wasn’t too long before he noticed a few locals hanging about paparazzi style outside an okiya, a sure sign apparently that a Geisha was about to leave for an appointment.  And sure enough, a few minutes later an ornate creature appeared in all her finery.   The whole ensemble costs thousands of pounds, and must weigh a ton, but it looks amazing.   I thought The Small Girl’s eyes might pop out of her head, much to the Geisha’s amusement.  I got Peter to ask whether she minded if I took I picture or two, and she nodded her approval – but as I didn’t want to feel like I was hounding her, I only took a couple. 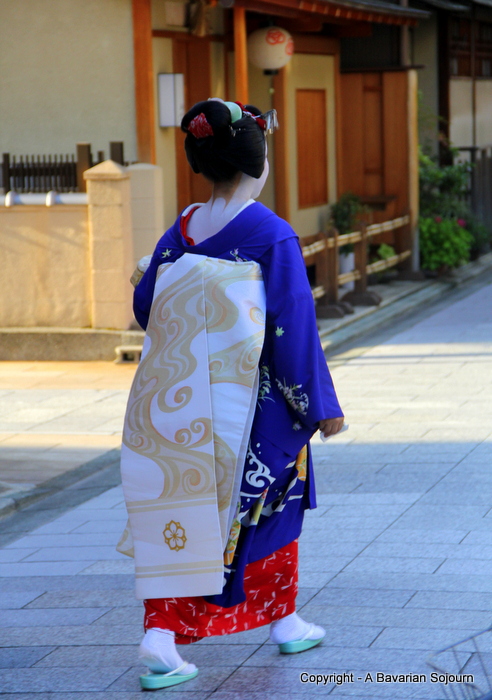 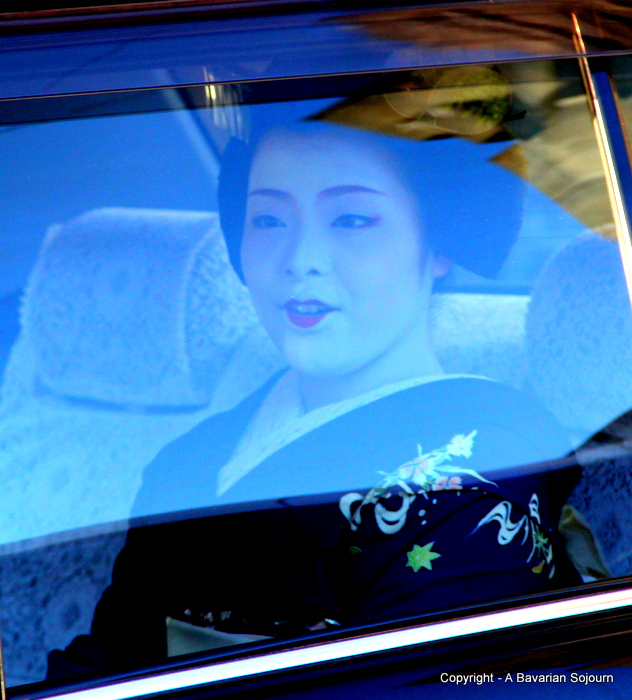 We went on to spot a few more all on their way to get ready for the evening, but no others in costume and make up –  at the time a little disappointing to the Eight Year old, but we did go on to learn a lot more about Kyoto and its heritage.  I suggest that you drop Peter a line should you be visiting the area –  he’s a busy guy though I warn you now, but it’s worth asking him isn’t it?! 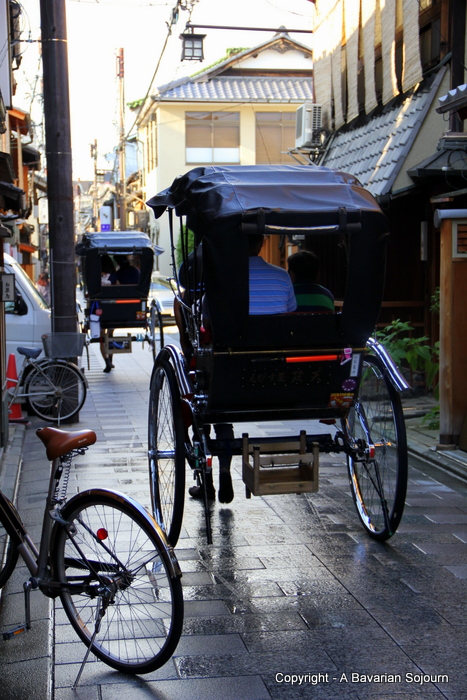 Heads full of facts, we met the boys for dinner.  And afterwards tired from a day of walking, we got a cab back to the hotel.  I definitely think Sod’s Law had a part to play in what happened next, as it soon became apparent that our hotel appeared to be hosting some sort of Geisha convention, there were dozens of them!!     Anyway, it made for a memorable day, and the Eight Year old is now torn between a career choice of Vet or Geisha when she’s older.

I won’t just remember Kyoto for that either.   Tempted by the beautifully drawn map in our hotel room, we turfed everyone out of bed just after sunrise the next day for a visit to the Imperial Palace Gardens, before it was time to bid this beautiful city farewell…    The advantage of this was not only to evade the oppressive energy sapping heat, but the tranquility of it, and apart from a few tai chi devotees and the odd dog walker, we had this serene and beautiful place to ourselves.

Following the line of the shallow (and empty) moat was great fun for Small boy who was busy talking about dragons and imperial warriors.  Obviously at a good bit in his story, he wobbled a bit, lost his balance and for the briefest of seconds touched the palace wall.   And then the alarm started.  The loudest alarm I think I might have ever heard.    Clouds of birds flew into the air,  and any and all peace was utterly demolished.     It turns out that at the end of the “moat” there’s a tiny black box containing a laser, and if you cross that laser…   If you were in Kyoto that morning and you were trying to have a lie in, then I sincerely apologise… 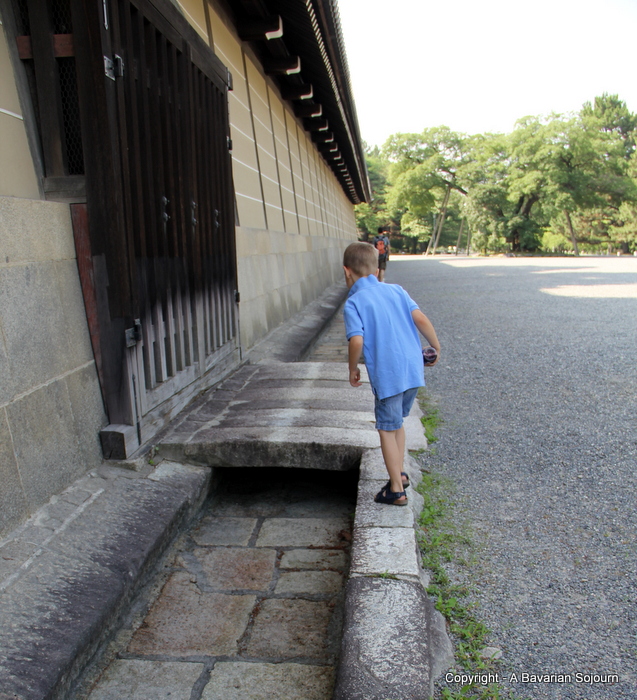 Next stop Fuji…   (we are nearing the end of the trip, honest!)