Before I had even written up our French Gite trip, I knew exactly what recipe I would include alongside the post – my absolute French favourite (well one of them) – Tarte au Citron…. It’s not like I can just pop along to M&S or Waitrose and buy one is it? So I have come to the conclusion that I might as well make my own!  And actually having now done exactly that, I am not sure I would buy it again anyway, it’s much much easier than you think!

Unless you have unwaxed lemons or big fat Amalfi beauties to hand (which would make it more of a torta wouldn’t it?) don’t forget to scrub them of wax  before you zest them.    And don’t worry if you run out of caster sugar either (as I did), light brown sugar works equally well, and gives it more of a rustic feel…

Feeling generous (well actually that’s not strictly true – feeling sensible, as I have a couple of Oktoberfest visits coming up, and believe me sitting comfortably in a dirndl is not that easy if you’ve eaten too much of something like this), I gave Mr R the other half of the tarte  to take to work.   I like to imagine his workmates as a kind of “Eurovision” taste testing panel (and it’s also part of my master plan in convincing our European friends that we Brits can cook just as well as they can!).   Let’s just say that this might have been my Waterloo moment (ABBA not Napoleon).   Not a “nil point” in sight!…

A big fat Gallic hug on a spoon (except the two below are Scandinavian obviously!)… 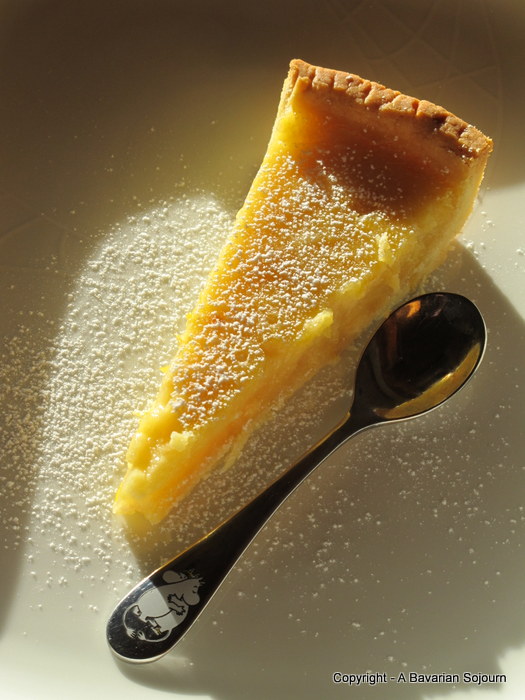 In a food processor, blitz the flour, butter and salt until it begins to look like breadcrumbs. Add the icing sugar and egg yolks, continue to process until a dough forms. Wrap in clingfilm, and put in the fridge for up to an hour (this makes quite a lot of pastry, so if you don’t use it all, freeze it or give the kids the pastry cutters and a jar of jam for further adventures in tart making!)

Preheat oven to 180DegC. Line the bottom of a dish/tin with baking paper and on a floured surface roll out the dough. Don’t panic if it breaks up a bit when you place it in the dish/tin, just squish it back together. Neaten the edges a bit and bake blind for 25 minutes (or until light brown)… Leave to cool.

Reduce oven temperature to 170DegC. In a jug, beat the eggs. Whisk together the remaining ingredients and set aside. Pour the filling into the pastry case (much easier if it’s on the oven shelf I find!) and bake for 30 minutes. If after this the mixture still looks too liquid, give it an extra five minutes.

Admire for at least half an hour until cool enough to sample. Do Ignore the sizing of the kitchen implement in the picture above. It is not adequate.