It’s easy to spot fields full of the strange flat vines that produce the grapes for Santorini’s wines, they are everywhere.  Forget any eye-scrunching, mouth drying experiences you might have had with Greek wine in the past, as along with cherry tomatoes, fava beans, white aubergines and pistachios, wine is what the island is growing increasingly famous for in the culinary world.

The vines themselves are quite beautiful when you look at them closely.  Trained into a basket shape, the grapes grow on the inside to protect them from the harsh island winds. This also helps the vines retain moisture from the sea mists that sweep in from time to time (more on them later!)… 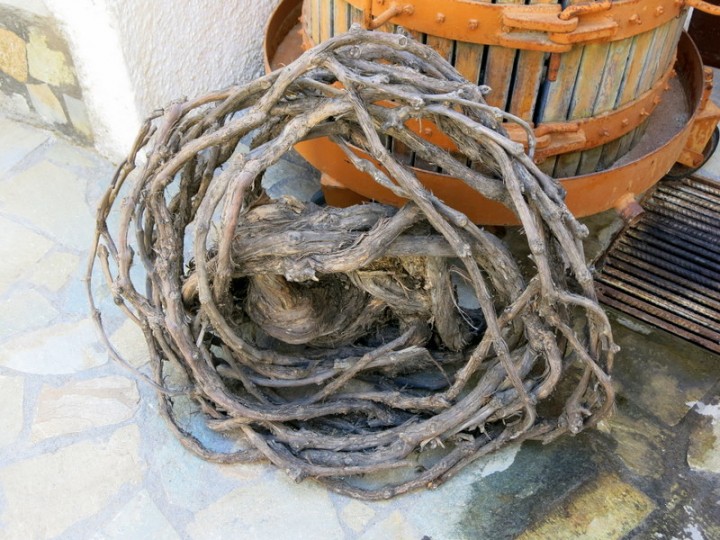 We just happened to drive past Argyros Wine Estate, having sampled a bottle of their finest a couple of nights previously, so we thought we would just pop in to buy a bottle or two – which you are positively encouraged to do by the way.

So whilst the Small People chatted happily with the resident canaries outside in the courtyard (with the cat-whisperer trying his hand at a spot of bird-whispering), and inspected an ancient vine or three at close quarters, we were able to sample a small selection of outstanding wines.  Or at least I was – Mr R had forgotten to put me on the licence of the TFC (Trusty Frog Car) when we hired it, which meant that whilst he got to drive everywhere, on this occasion I had the honour of approving any purchases by sampling them beforehand – which I think was a pretty good deal!    The chocolate they sell here received vigorous nods of approval too (the small people were presented with a tiny square each!)  – finest quality dark stuff filled with Vin Santo soaked raisins and produced not too far from here in Austria no less. 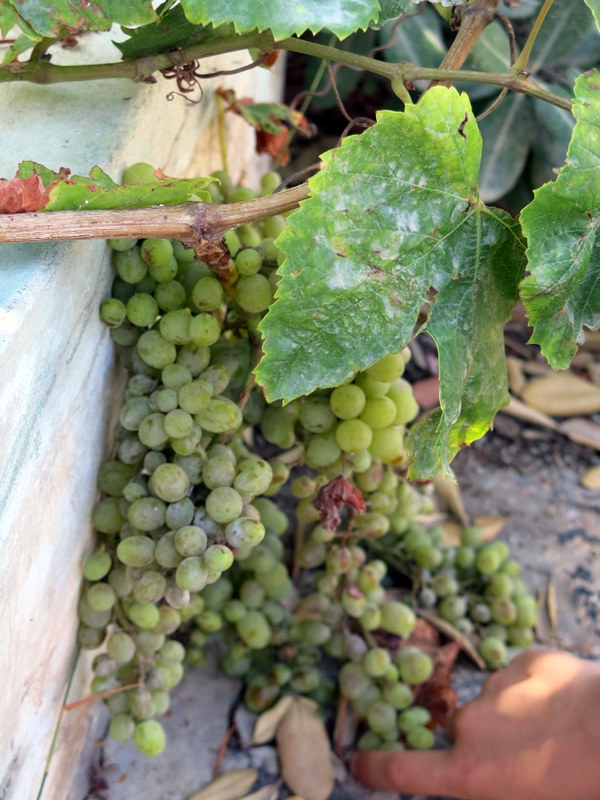 Our morning of wine appreciation was followed by a little further cultural admiration at the insistence of the Small Girl – an hour well spent at the Museum of Prehistoric Fira – it’s not big, you don’t really need that long – but you will see some of the most beautiful wall paintings taken from sites such as Akrotiri and Ancient Thira, and perhaps most precious of all – a tiny golden Ibis found at Akrotiri – which precedes even that by thousands of years. 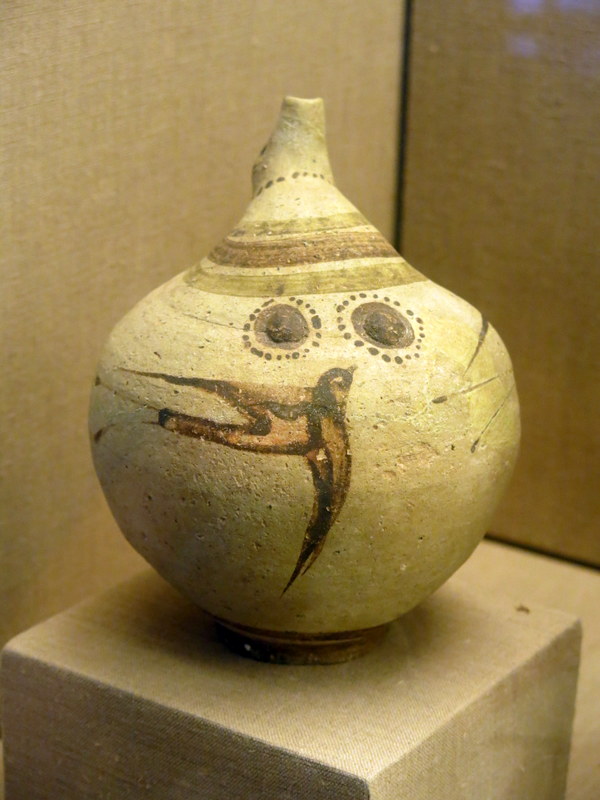 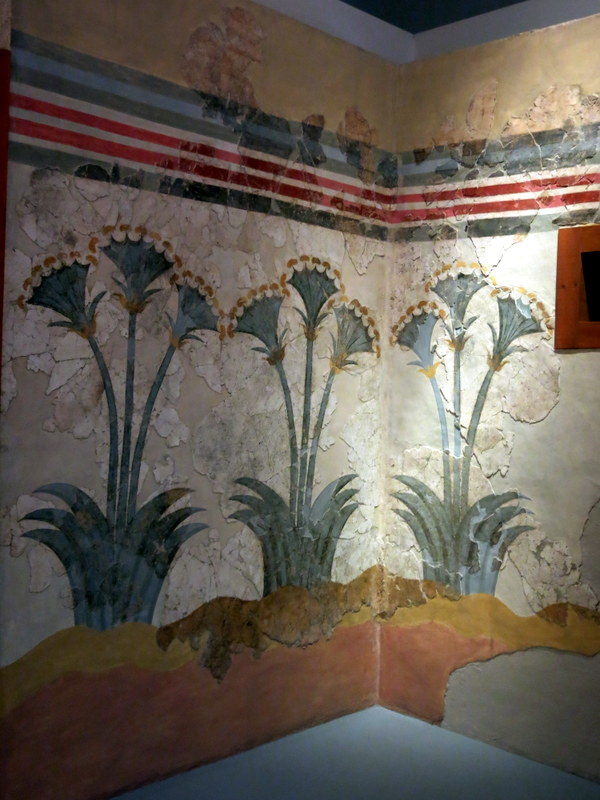 Χάνι (pronounced Chani) beckoned for lunch that day.  We had driven past countless times, and it always looked packed full of locals (which in my book is always a good sign)!  Obviously there are great Caldera view restaurants to be found all over Santorini, but if you want something really authentic (and usually at a fraction of the price) head to the quieter less touristy streets and you can eat really well.  Χάνι is one of these places!   The name simply means “traditional inn”, and the welcome we received from owner Evangelos certainly suited it.   Here we dined on the freshest Greek Salad, Saganaki and Souvlaki, and all four of us were able to eat like royalty for less than €25.   And if this wasn’t enough, Evangelos sent us on our way with a paper bag overflowing with the sweetest juiciest nectarines from his back garden… We took them to the beach and didn’t even care about the sand that stuck to the juices that ran down our chins. 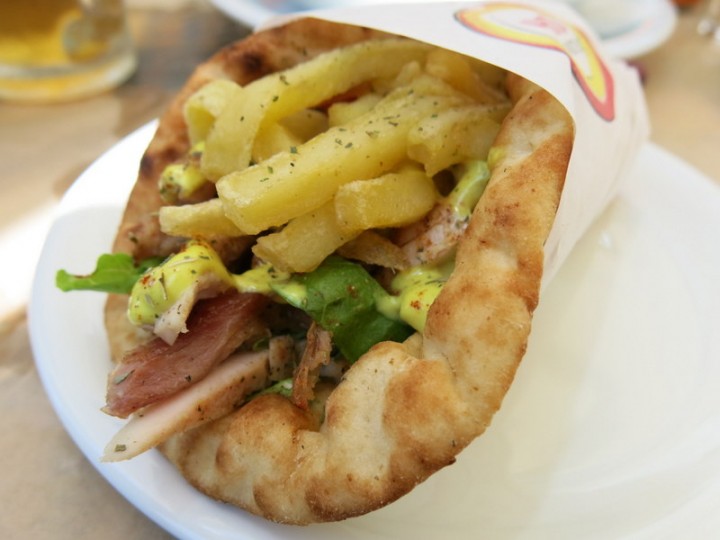 Much later (and still really full from lunch) we retired to the villa for a simple supper of tarama and pita, and yet another sunset. Oh, and a bottle of that excellent wine from the Vineyard we had visited earlier that day of course… Bliss! 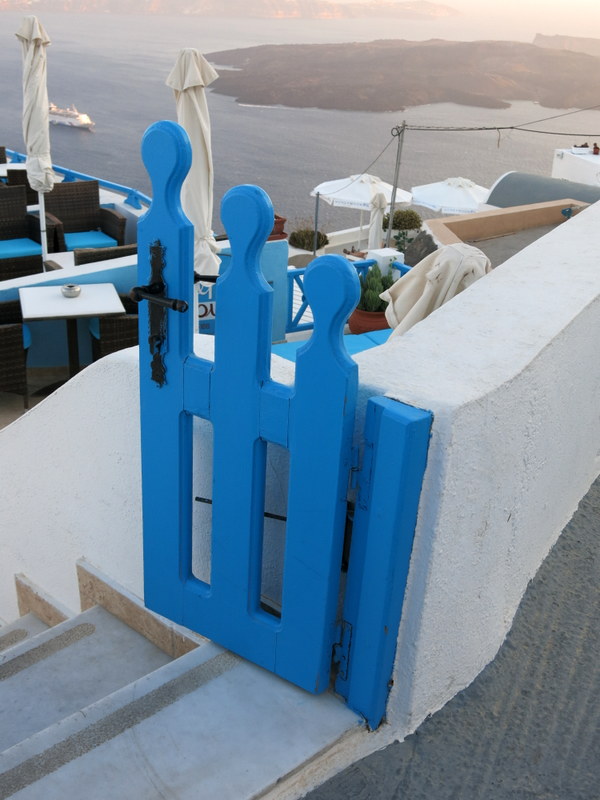