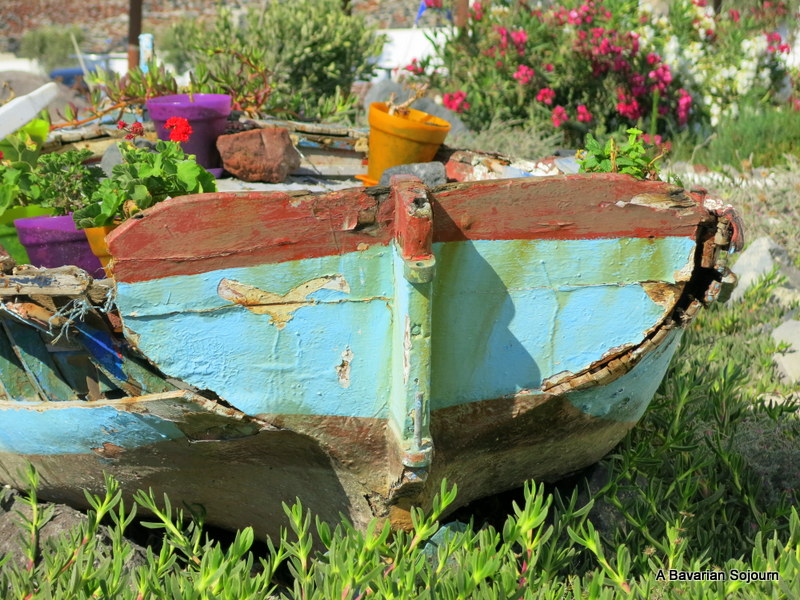 Warning:  This is yet another Santorini post from a set I had squirrelled away before this whole working lark began.   I am beginning to feel like I am getting into some kind of routine though, and there are plenty of posts on other subjects coming up – promise!  But for now, if you will indulge me…

No doubt spurred on by the chunks of delicious chocolate they were given on the previous day’s vineyard visit, both Small people upped the anti and opted for a trip to a Wine Museum – I didn’t have to show them a brochure or anything (it had taken their fancy after driving past several times!)… And, as this particular museum is set in a deep and very cool (in terms of climate, not funkiness) underground cave system AND it involved wine, I wasn’t about to argue with their decision. 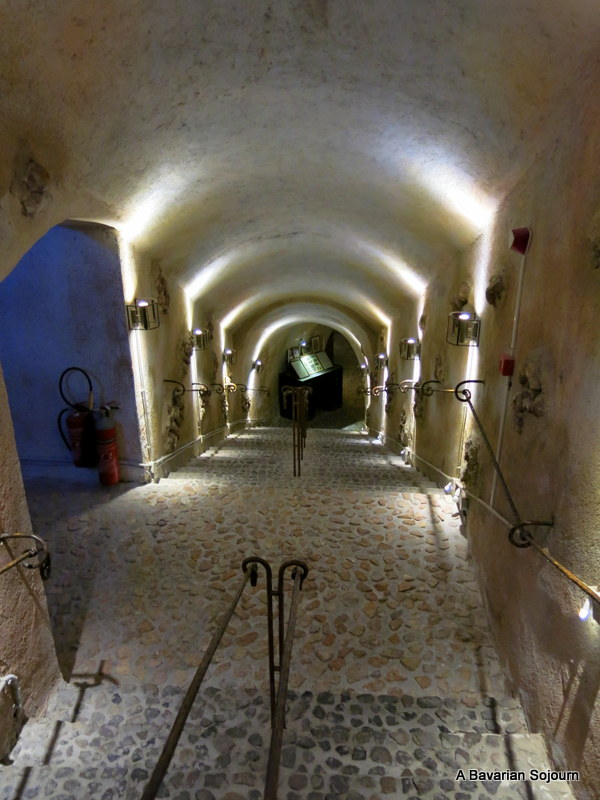 As with vast amounts of things in Greece it seems, you don’t usually have to fork out for children under the age of ten. This meant, that whilst they were gratis, we had to share audio-guide headset things by plugging in an extra set of headphones. An audio-guide that the Seven year old insisted on being in charge of, which resulted in us quite often attempting to go in opposite directions in a slightly PushmePullYou-esque manner.   Add to that a (quite typical) fault with our particular set which meant the sound effects were so much louder than the actual dialogue (and a child reluctant to change it as he couldn’t understand why I had a problem with it!) and soon enough I had lost my serious wine appreciation composure thanks to the super loud clip-clopping donkeys, over-dramatic wine machinery clanks and over excessive “background chatter” from the locals in group scenes.  Not wishing to encounter any more disapproving looks from other museum guests, it wasn’t long before I had unplugged my earphones, and opted for the old-fashioned system of reading the detailed inscriptions of the displays instead, which meant I did at least learn something – besides insisting on paying for extra audio-guides. 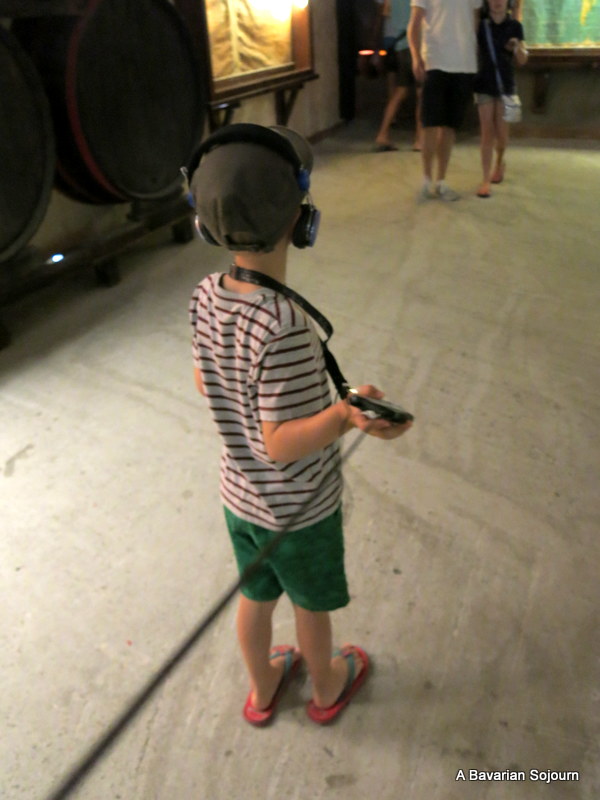 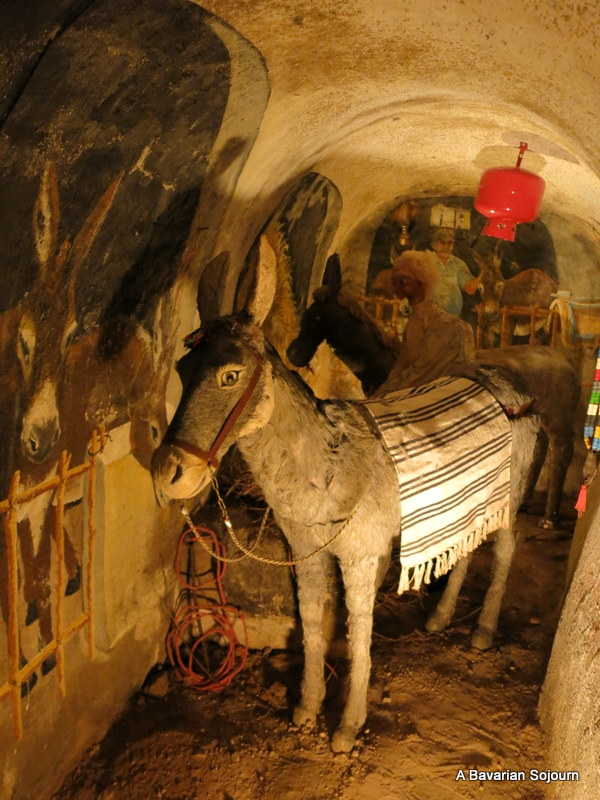 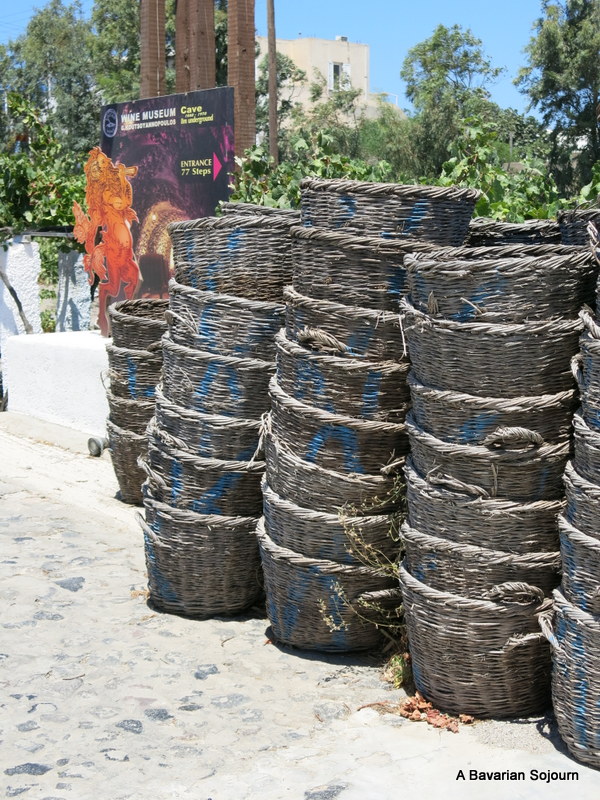 Wine Museum visit complete, we headed for beautiful Pyrgos and the shade of the Kastilli – an ancient Venetian Castle perched at the very top. If you look closely enough, you can still spot the Venetian influences too, including the famous winged lions here and there! I would go so far as to say that Pyrgos is a must see/do for any Santorini trip. 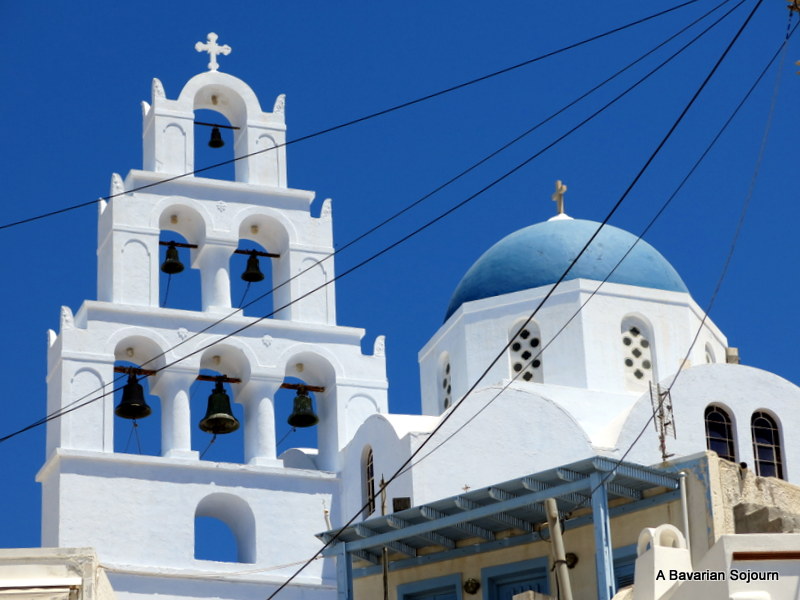 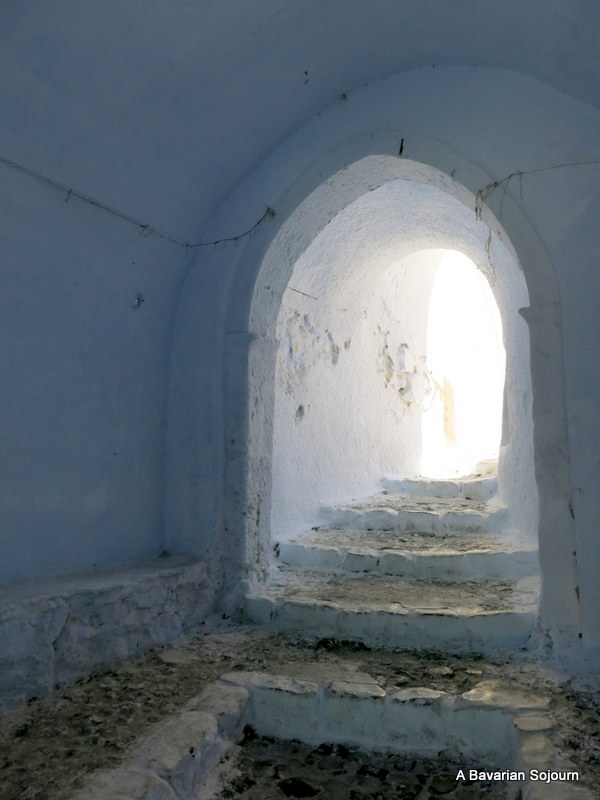 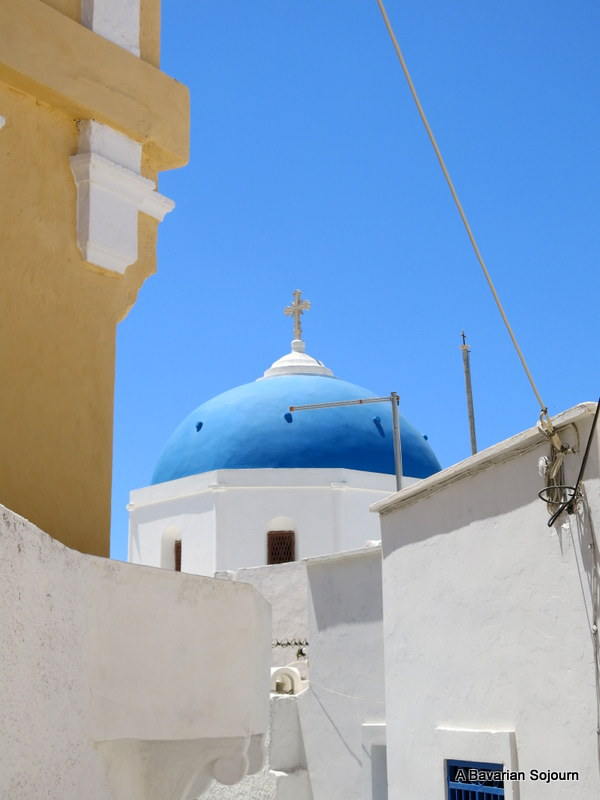 Its charming shady streets and alleys are incredibly picturesque and the view-point from the very top is almost certainly the one you see on the front of many a Santorini guide-book and postcard. Do pay a quiet visit to the tiny church of Church of Agios Nikolaos Theotaki to gasp at its prettiness and revel in the coolness.

Looking for something to eat?   We spent a few happy hours in the company of friendly staff (and a few feline friends!) in the shady courtyard of Kantouni Traditional Cafe.  Don’t miss the tiny shop here, it’s worth a visit! 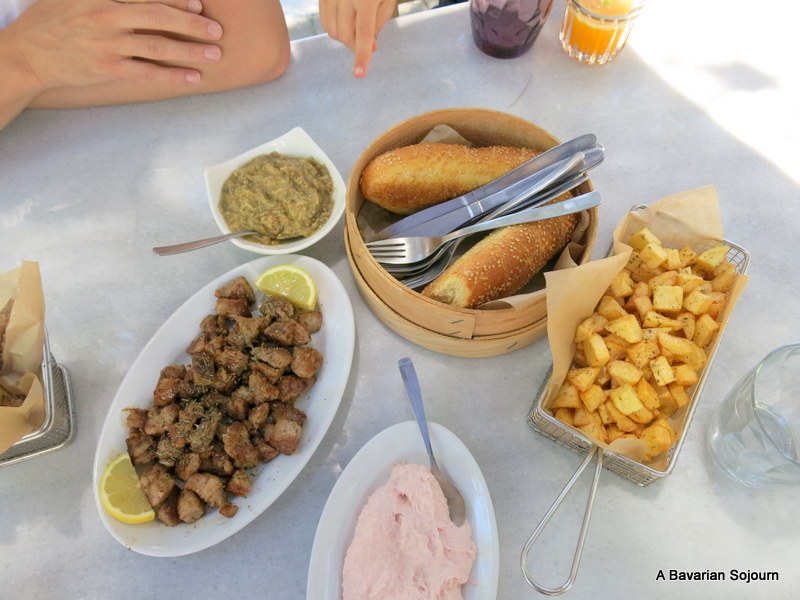 We ended our day (when energy levels had been replenished) with a return visit to Oia for a wander. If you were to ask The 9 Year Old what her favourite shop was here, it would definitely be this quirky little place.   Founded by a group of friends, Atlantis Books is a treasure trove for any bookworm and really worth a visit. 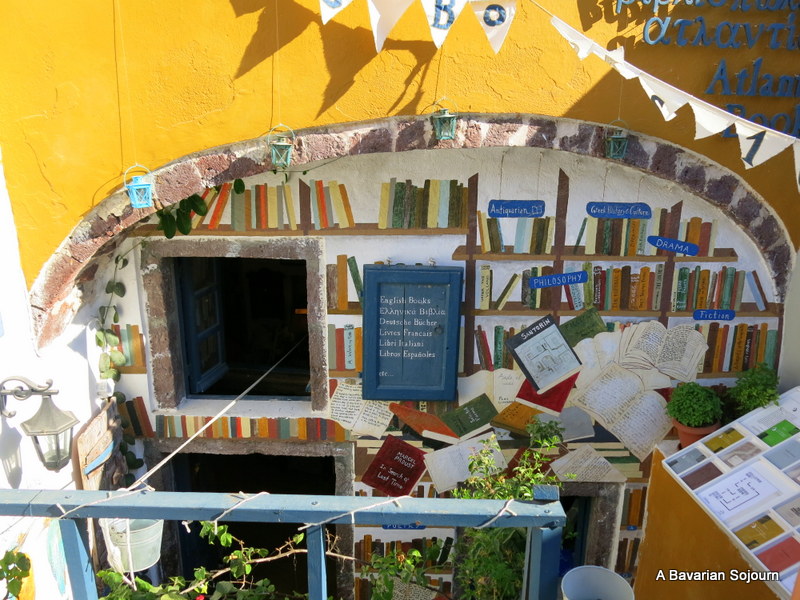 And later still we stumbled across Roka, tucked away down a tiny side street  in time for dinner. I guess you should really book a balcony view for the sunset here, but we were more than content with our last-minute spot in the tiny courtyard at the back, with a huge delicious plate of baked aubergine, and an obligatory Greek salad.    All Highly recommended. 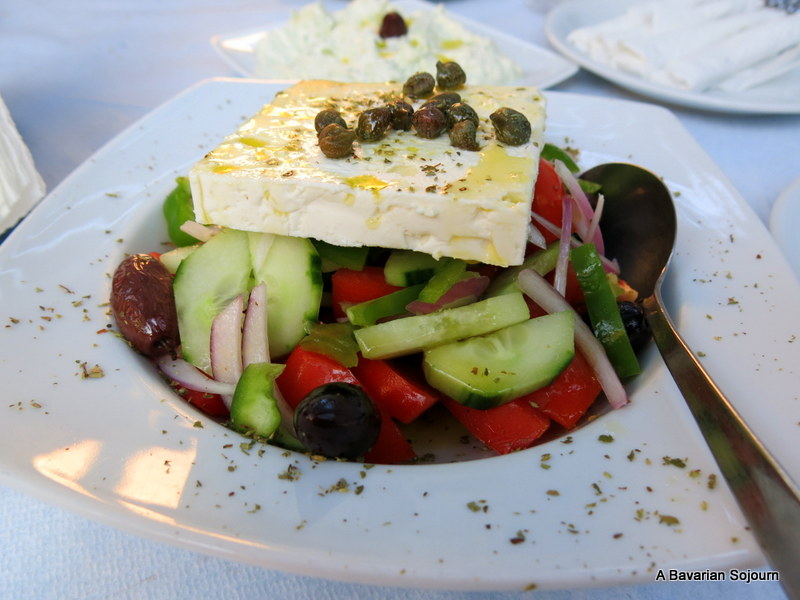