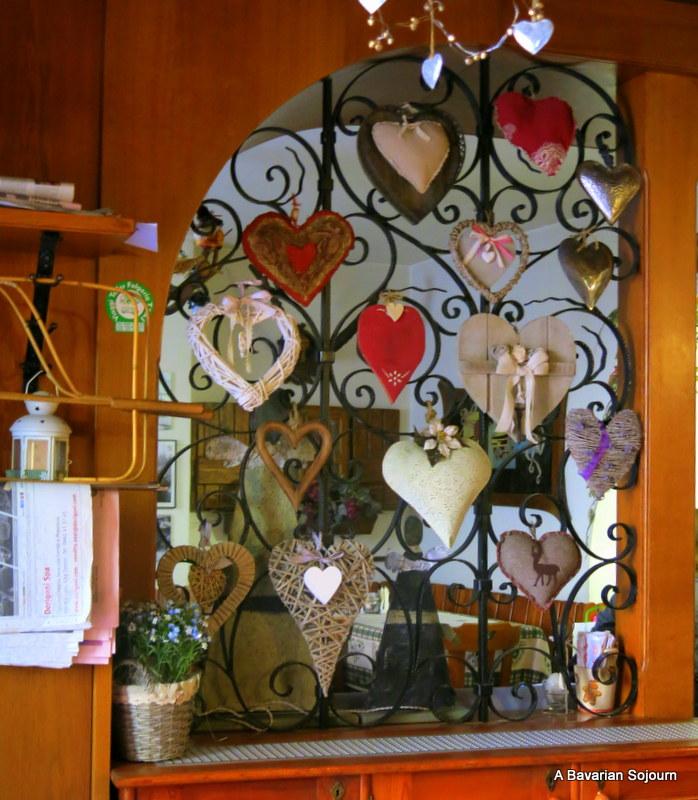 Our introduction to Folgaria wouldn’t have been complete without decent Italian food.   Used to Austrian and Bavarian Alpine restaurants (which tend to be good, but usually stick to what they do best) I often get a bit “schnitzelled” and “spatzled” out after a couple of days.      In Folgaria however, as part of a country where food is almost as important as religion, there is no fear of that happening.  Ever.

The first of many enjoyable lunches was at Restaurant Da Ugo.  Its unassuming exterior makes you think there might only be a couple of tables inside, which there probably are in the side room off the sweet little bar at the front, but the main dining room (lots of wood, lots of hearts, lots of cosiness) is at the back, and was absolutely packed to the rafters with locals.  If that’s not a good sign then I don’t know what is.     If any of them managed to make it back to work after the size of their dishes of delicious home made pasta, I would be incredibly surprised –  they are generous to say to say the least.    When I mentioned this to our friendly waiter, he smiled and told me they were “mountain portions”…  It’s probably just as well I don’t live here.

My Caramelle with scamorza, speck and sage butter was delicious, and could probably have fed a small army.    The Small Girl managed a vast amount of lasagne, and claimed it was the best she had ever eaten (I had a small taste, and completely agreed!).  Mr R loved his tagliatelle with a local hare ragu, and The Small Boy decided that his gnocchi con pomodoro was so amazing he was going to eat the entire lot.  Which he did – after a small interval that involved lying down and groaning a lot (out of sight of other guests thankfully) – a tactic he can well get away with at the age of 7, but that his mother sadly wouldn’t anymore. 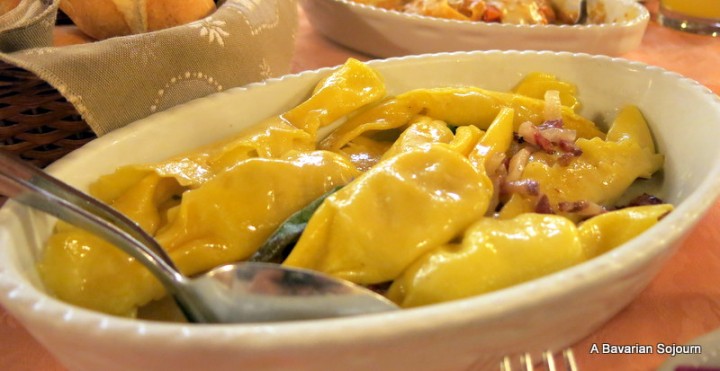 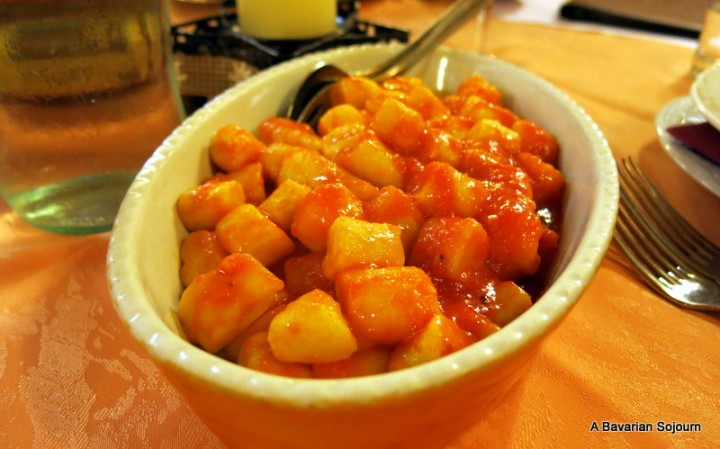 With chestnuts in season, these took centre stage in a semi-freddo with a chestnut puree core and drenched in persimmon sauce (something else grown locally – I have never seen a persimmon tree before, they are gorgeous) .    Given the atmosphere, it was really easy to imagine we were in the middle of a ski lunch with snow falling thickly outside, so I accepted a home made chamomile brandy  just in case.  We loved the food, the atmosphere and the great service. 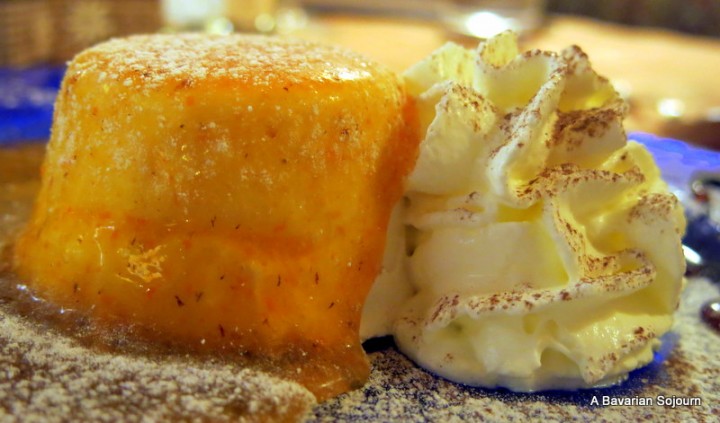 Also featuring highly on my Folgaria Eats list would have to be the rather lovely four star Folgaria Post Hotel, where we enjoyed an evening full of traditional food given a fine dining edge.    The welcome we received when we turned up made us feel like old friends rather than guests, before being taken downstairs to the beautiful restaurant (another instance of traditional with a modern twist!) with typical hand-carved furniture adorned with gorgeous white and blue alpine fabric.   Despite the fact that I am sure they entertain many families here (this is Italy after all!), this particular colour scheme had me mentally crossing off anything containing chocolate, red wine or orange juice before we had even started – all for my own sanity rather than that of the restaurant’s, the hosts are so kind I am sure any such disasters would have been swept aside with a smile. 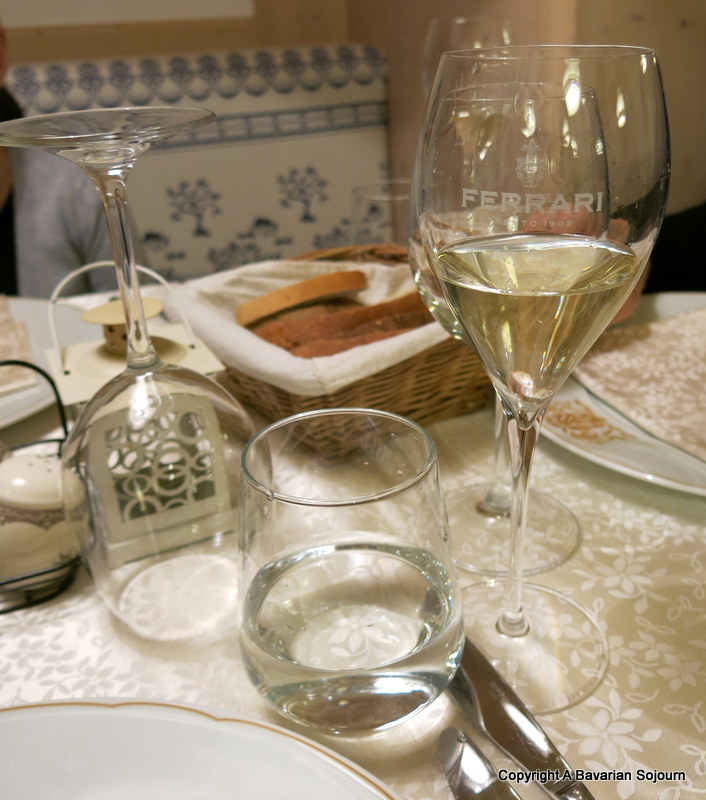 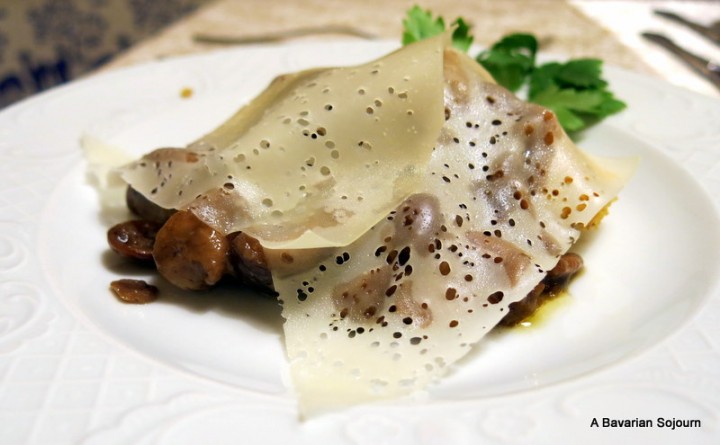 We began with a delicious dish of polenta (a regional speciality) topped with wild mushrooms.  Thankfully I had only requested a starter for the Small People as these too were “mountain portions” and almost the size of their heads.  We however went on to sample some excellent local wines before embarking on the culinary adventure that is Bollito Misto, a classic North Italian stew consisting of several different kinds of meat, served alongside mostarda and salsa verde – quite the regional speciality.    I gave myself away as an interloper as I attempted to cut dainty mouthfuls, but when I looked everyone else around me was tucking in with gusto.

Yes this is blurry. No I didn’t share… #tiramisu #folgariaposthotel

And afterwards (because if it’s on the menu in Italy it has to be done), we gave the restaurant the Bavarian Sojourn Tiramisu Taste Test, which I am happy to report it passed with flying colours.   A lovely meal, in great surroundings.  The Folgaria Post is a hotel that I would return to for a special occasion.   Highly recommended.

Just up the road is Hotel Alpino, the sister hotel to the Alpen Eghel (Alpino has to be the big sister, it’s been in the family for generations, look out for the amazing photograph at the front desk!) and was to be our host for the last meal of the trip (you don’t have to be guests to eat at any of the hotels by the way, just call ahead and book a table!).   Unlike the slightly minimalist interior of the Alpen Eghel, Hotel Alpino does alpine by the shovel full in a completely cosy, wooden interiors, overdosing on edelweiss kind of way. 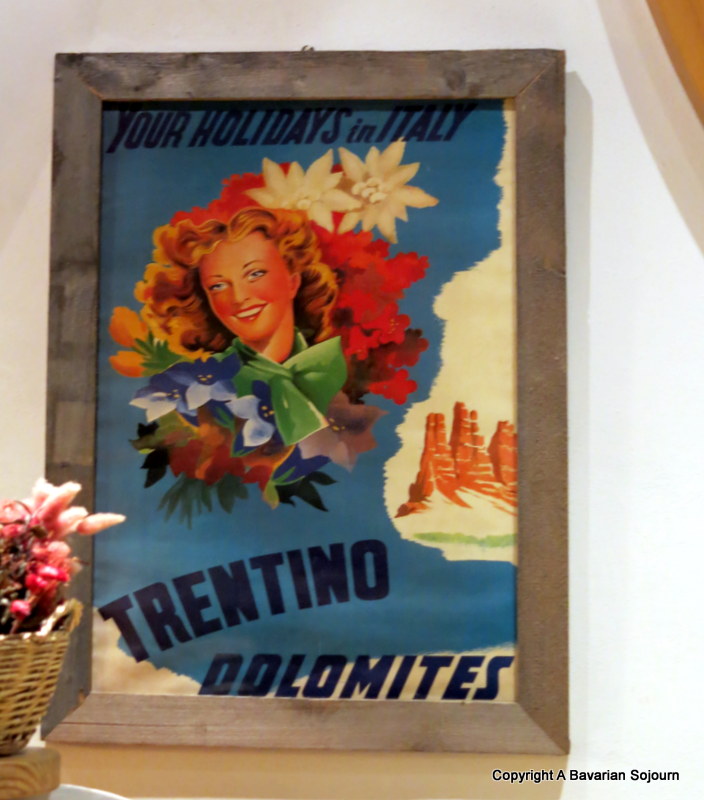 We enjoyed a decent meal here that included pumpkin lasagne, a carpaccio of beef and pomodorro pasta for Small Boy (who obviously decided to stick to a theme this trip!)!   Guests have two choices from a set menu, and the food is accompanied by good wines, and delivered by super friendly staff. 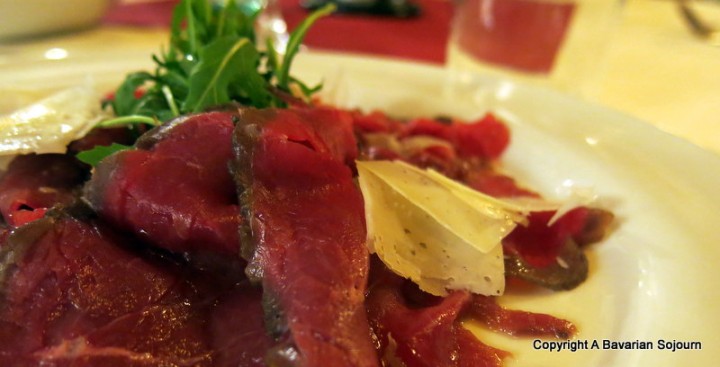 Afterwards, we explored the hotel where we found the most perfect cellar bars – one room packed to the rafters with wine, and another that turns into an intimate live music venue on the weekend. 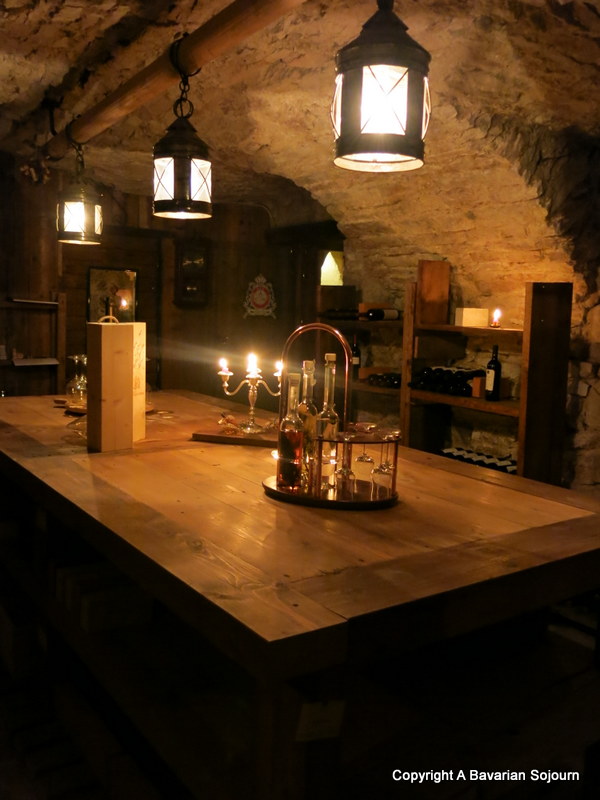 Seduced by this (and because I am very nosey!) I asked to look at a couple of guest rooms for future trips and recommendations.   Each room was completely inviting with furniture made from a fragrant wood supposed to induce the best kind of sleep.   I could quite happily have done an impression of Goldilocks that night, and not moved any further (it was probably all that food!)    Another place on my future visits list, and again highly recommended.

Needless to say I haven’t had to eat much since we got home,  I haven’t actually needed to.    There’s one more place coming up by the way, but it’s not in Folgaria so it gets its own post!…