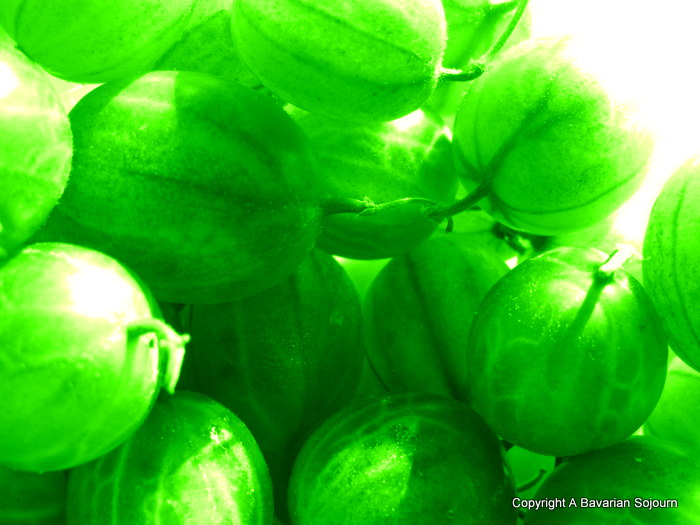 Or Gooseberries to those less familiar with the term.  Or stikkelsbær as they are known in Denmark, groseille in France, and stachelbeere here.  I may not be fluent in any language apart from English, but you can always rely on me to remember the global names for completely random things…

I used to hate gooseberries as a child, along with rhubarb and liver (although that’s in a slightly different category obviously)…    My Mum used to try to trick my sisters and I into eating such things by putting rhubarb in jelly, hiding stewed gooseberries under a thick layer of custard,  and covering liver in a mountain of mashed potatoes and onions.   It never worked.   And then we got a dog, and he turned out to be a fantastic waste disposal unit (especially when it came to the liver), and he truly became our very best friend.

But it turns out that I do quite like gooseberries now, so I am making up for lost time here in Bavaria.  There are berries to be found everywhere at the moment, and little shacks at the side of the road sell seasonal fruits such as strawberries, cherries and red currants.  It also appears to be stachelbeere season, so it would be rude not to make something typically English with them.    It doesn’t have to be cold outside for crumble to make an appearance in our house…

500g Gooseberries, covered in 3 tablespoons of sugar, shaken about a bit and placed in oven-proof dish.

Place the flour, sugar and butter in a bowl, rub ingredients together until you get a bread-crumb like texture, then mix in the oats.  (I always like to add a grating of fresh ginger to a crumble mixture as well, it works well with quite  a few fruits, especially gooseberries and rhubarb!).

Serve with custard, or lots of cream.  Not that good for your waistline, obviously.  But I bet it counts as one of your five a day!! 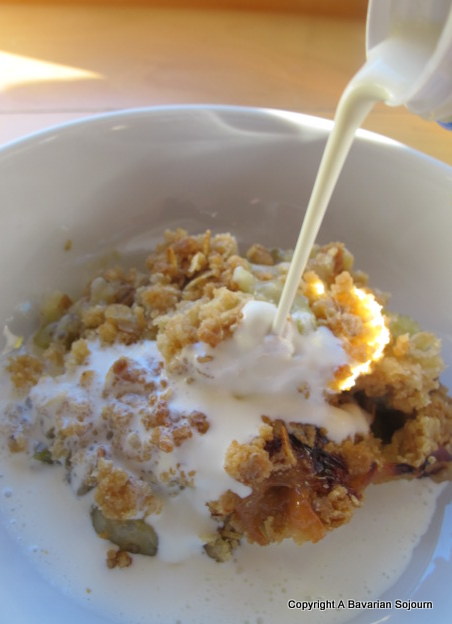