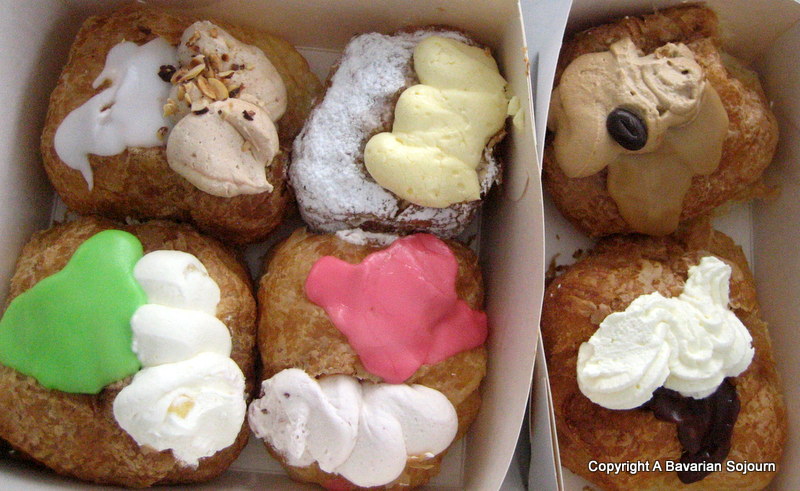 I like being an Expat for the most part, but those who haven’t dipped a toe into life abroad can never underestimate the extra pressures that we find ourselves under at certain times of year (she says with tongue ever so slightly in cheek!) – such as Carnival/Karneval/Fasching/Fastelavn/Mardi Gras or Shrove Tuesday to give it a few global names it goes by….

Here in Bavaria they celebrate by dressing up and basically having a big street party.   Munich’s not as well-known as other German cities for Karneval, but you can find smaller parades around the city, and of course there’s the Dance of the Market Frau in the Viktualienmarkt.  If you happen to be in Munich, you should head there anyway…

Kids dress up for school too, and of course they absolutely cannot wear the same costumes they wore (it seems around two minutes ago) for Halloween now can they?? 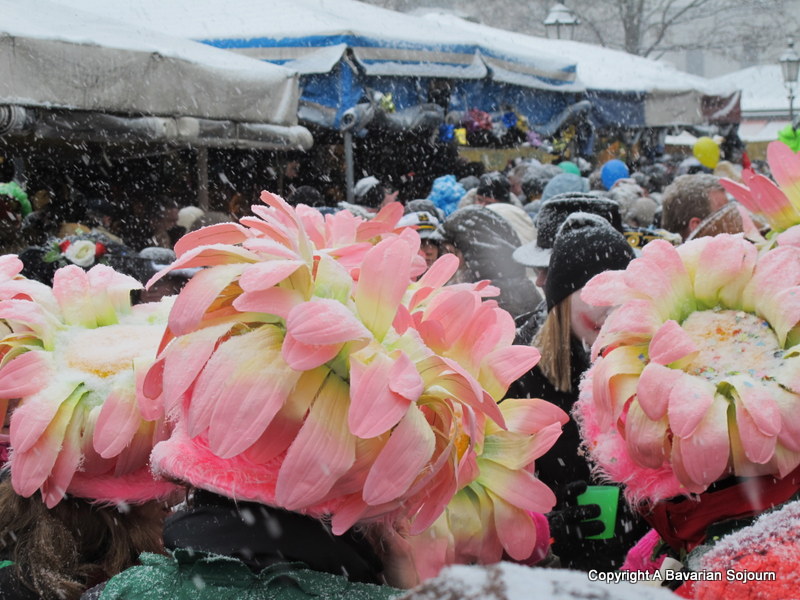 Fancy dress fun in the snow at The Viktualienmarkt in Munich

Thankfully as if to compensate the parents dealing with ‘discussions’ about the above, the seasonal food of choice is the mighty Karneval Krapfen (donuts) that comes in a vast array of amazing flavours and colours.   There’s no slaving over a hot stove flipping pancakes here, which is probably just as well, as most people are sloshed by lunchtime which could obviously well prove dangerous in the kitchen…

In Denmark it was a little less about the dressing up (although children dress up for school), more about children hitting their parents with twigs first thing of a morning (strangely), whacking a cat out of a barrel (a little bit like a giant pinata full of sweets – I don’t think real cats have been involved for few decades now) and of course an entire spectrum of seasonal Danish Pastries otherwise known as Fastelavn Boller.

I feel like I have been harping on about Denmark a lot recently, mainly because nearly everything on TV seems to be about the place, but perhaps after a few years away could it be that my glasses are now very much rose-tinted?…   Or could it be that I have a “cake calendar” in my head, and I have a subconscious alarm going off reminding me of such seasonal cakes like Fastelavn Boller, Fasching Krapfen and the like?  If it’s that then the small people have it too – because as we deliberated over this year’s Karneval costumes for school (thanks very much Horror-Shop you have saved my bacon here more than once!) they both remembered Danish Fastelavn Boller, and asked if I could make them (having deduced that “it must be a bit boring at home, because the baby sleeps a lot and you aren’t working”!!)!    With baby unfriendly temperatures of -16 last week this past week and actually not much else to do, we did make them, albeit a slightly smaller version… 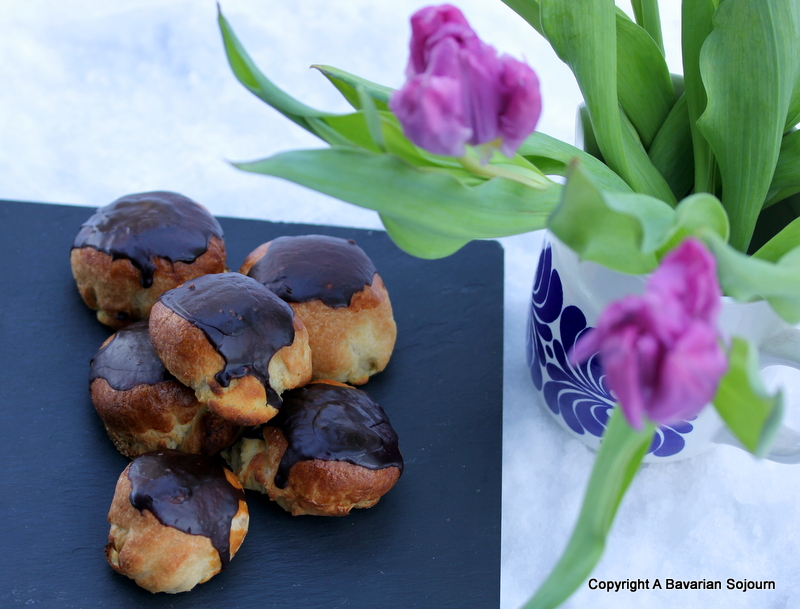 It’s not the easiest recipe in the world, but it is a satisfying one to make, and will win you a lot of brownie points while you are still deliberating over Fasching costumes!   This time around I made them with a custard filling, chocolate icing on top, and no smarties – as they are much too babyish apparently!    I might miss the donuts when we leave here, as much as I miss the Danish fastelavn boller (there might have to be a Krapfen post somewhere down the line), but I definitely won’t miss the extra obligatory fancy dress requests…

In a food mixer bowl, dissolve the yeast in the warm water. Add the egg, sugar and salt and stir gently. Switching the machine on add the flour and mix until the dough comes together and doesn’t stick to the sides. Turn out and knead for a few minutes until no longer sticky. Put back in the bowl and place in the fridge and leave to rise for 15 minutes. Roll out the dough into a 35cm square. Spread the slices of butter over the dough, and fold the corners of the square into the middle to make another square. Roll into a rectangle shape. Next fold the top and bottom thirds of the dough in to the middle like a business letter. Carefully roll out the dough into a rectangle again and do the business letter fold. Refrigerate for 15mins. Repeat this rolling and folding process 3 or 4 times, refrigerating in between.

In the meantime make the custard.  Pour the cream into a pan and scrape the vanilla seeds into it.  Bring to the boil.  In a bowl beat together the sugar and egg yolks until pale and fluffy, whisk in the cornflour.   Pour the egg mixture into the cream, and over a very low heat whisk until it starts to thicken (adding a tiny bit more cornflour if necessary).  Don’t leave it, or it will catch.   Remove from heat and allow to cool completely.

Roll the dough out to 35cm square and cut into four rows of four.   In the middle of each square put a couple of teaspoons of custard and fold the corners of the square over the top, pinching the sides together, and forming into a ball as below.  Be very careful not to leave any sides unsealed or the filling will leak out.   Place smooth side up on a baking tray and cover with a tea towel and leave to rise for half an hour at room temperature.

Heat over to 225°C.  Brush each pastry with a little beaten egg and bake for 12-15 minutes, leaving to cool on a wire rack.   When it comes to toppings the world’s your oyster, you could melt chocolate, or use a little icing sugar, cocoa powder and mix together with a drop of boiling water.   Best eaten as soon as possible, if they even last that long… 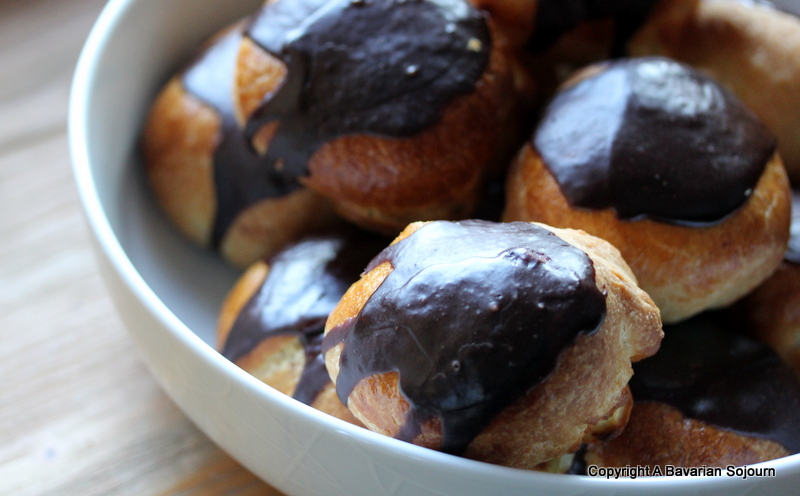