No not parking, Parkin.  You can breathe a sigh of relief this post isn’t about that and my general lack of parking ability, because if it was we might be here for quite some time…

Anyway, as I have mentioned before, this Expat life is all very well and good, but making sure my two keep in touch with their English roots is just as important,  so when it was my turn to be a “Parent Guest” in The Seven Year Old’s class recently,  I relayed the story of the Gun Powder Plot to a group of English pupils, and as it turned out, the teacher and the classroom assistant too –  so I am kind of hoping I got my history exactly right!   Because of feeling ever so slightly “under the spotlight”, I may have reeled through the topic a bit quicker than anticipated, and found I had to improvise to fill the rest of the time at the end, which I did by telling them how we used to celebrate Bonfire Night in the “olden days” (when I was little) in Yorkshire, where we lived until I was 9.    I always associate Bonfire night with living in Yorkshire, I think it’s because it seemed to me that Bonfire Night there was always as much about the food as it was about the fireworks!..

I reminisced to the class about traipsing out to the playing field on those (inevitably cold and dull) November afternoons all those years ago, where we would stand around the bonfire eagerly awaiting the first treat – a big baked potato, stuffed with butter and wrapped in very cheap tinfoil.  As it was cooked in the embers of the bonfire – and thanks to the quality of the foil, it would usually be dotted with grit and ash, but it warmed the hands if nothing else.    It was the next bit I looked forward to the most anyway, a great big thick slab of Parkin – the closest thing we English have as a traditional gingerbread I guess…

We took the ‘Parkin on Bonfire Night tradition’ with us when we moved down South, and now, even though we won’t have Fireworks in Bavaria on November the 5th, we will have something associated with it…

Funnily enough I had forgotten that it even contained oatmeal at all, and was quite sceptical about this until we tried it fresh out of the oven… Isn’t it funny how food can take you straight back to a place?   Just one mouthful of warm gingery sticky cake, and I was 8 years old again – standing out on a freezing cold playing field, whilst being lectured about the dangers of picking sparklers up at the wrong end…

Parkin gets better the longer you leave it for by the way, which probably won’t be for very long in our house. 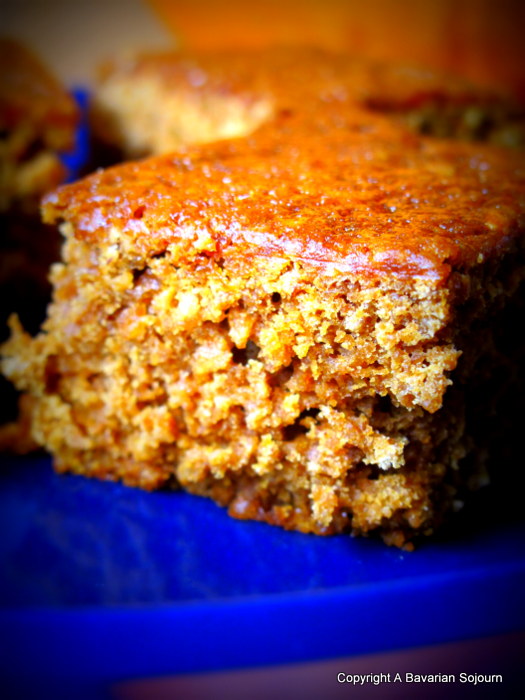 Preheat oven to 150c, and grease and line a small deep baking tray.

Combine flour, oats, spices and salt in a large bowl.

Melt butter, treacle, sugar and syrup over a low heat.  Add to the dry ingredients, and combine well with eggs and milk.

Bake for one hour, then test with a skewer – it might need a little longer depending on your oven.  Leave in the tin to cool before putting it in an airtight container to mature for a day or three – if you can…