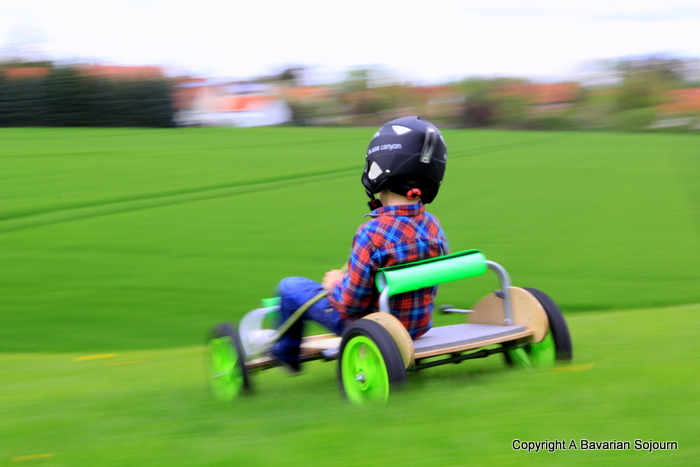 As well as the enormous mountains on our doorsteps, it’s not uncommon to find specially created sledging hills dotted about the place…      These massive snow-covered mounds can be quite the village meeting point in mid-winter, as hoards of children wile away the hours hurtling down them.    Parents stand precariously at the bottom to catch their high-speed offspring, or chat leisurely at the top ready to send them on their way again with hefty pushes (on what will hopefully be a clear no-collision course!!), and all the while generally freezing, but on hand to deal with wayward sledges, missing gloves and the like.

But, as you might imagine, these huge hills are not so busy in the summer – which means they are perfect for picnics, a spot of hill-rolling, or something even more exciting, and very traditional  –  go-karting! 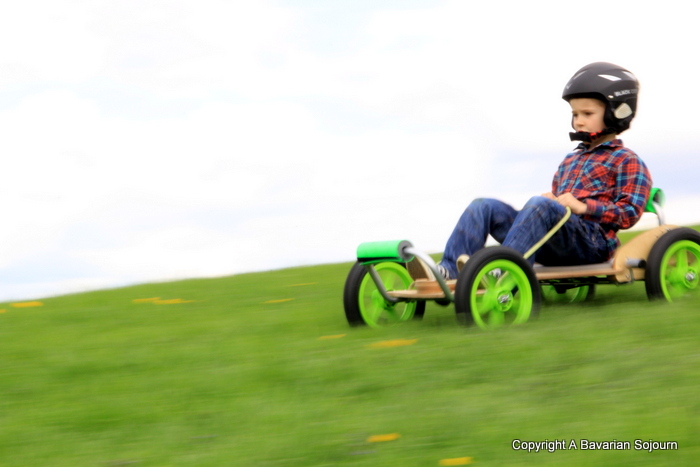 I have a friend whose husband is one half of the design duo that came up with the ATK*, a fantastic All Terrain Kart which does exactly what it says on the tin.     Sadly (for us at least) in a couple of months they will relocate back to the UK.  So, before they could get packed up and start to think about disappearing, I begged them for an opportunity to borrow one for the day so we could give it a test run in the Bavarian hills.

I think Small Boy thought all his birthdays had come at once!   As he sat there trying out the steering and testing the braking system the moment it was lifted out of the car, it gave me a glimpse into his future – I didn’t need a crystal ball for that one – it obviously involves wheels!   His father was just as enthusiastic, and his engineering side couldn’t resist giving it the once over to inspect the “mechanics”…   His conclusion?  It’s well-built, and sturdy at that.  A point that he had to thoroughly test on his own of course (it will take an adult’s weight!) later on in the afternoon, but not before Small Boy – he made sure he was definitely first in line…

Several super fast downhill slaloms, and lots of squeals of delight later, he managed to up-end the ATK and lay there rather like a squashed beetle with the thing on top of him.    My heart leapt a tiny bit as Mr R sped down the hill to find out why he wasn’t moving, only to discover that the reason why he couldn’t move was that he was doubled up with laughter and not at all hurt.  The picture below is after another pot-hole incident, which I think he actually headed for on purpose. 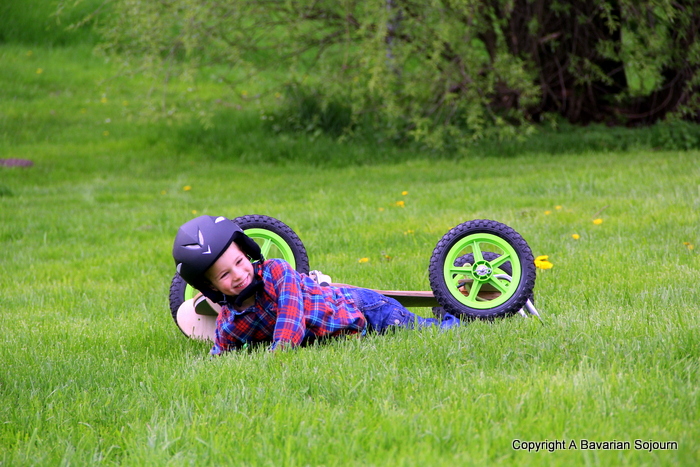 In fact, I don’t think I saw him without a huge grin on his face for the entire afternoon, and it was fantastic to see both him and his sister (once she got a look in she managed quite a few super-fast runs herself – she’s not known as the Danger Mouse in our family for nothing!) having huge fun in the great outdoors on this fantastic piece of kit. 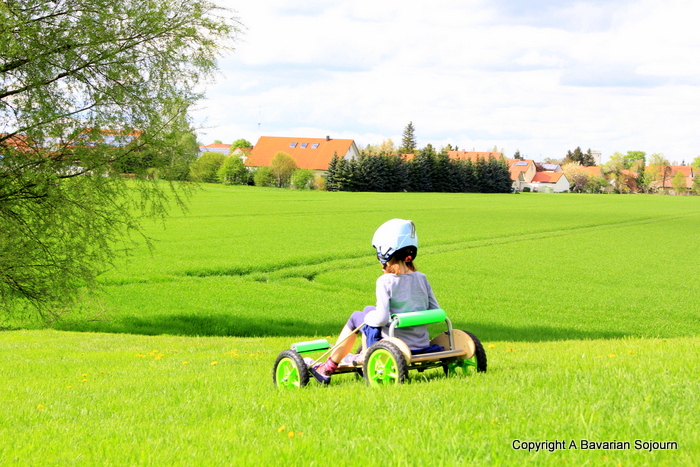 By the way, we were advised to wear protective head-gear and knee pads (and yes they are ski helmets!), but having got to our “hill du jour” we discovered that we had only brought one pair with us, and they had “Hello Kitty” emblazoned on the front.  These were considered far too passé by The Eight Year old, and were of course immediately dismissed by her brother.    It did make me laugh that both he and his father had matching “grass knees” to go home with though! 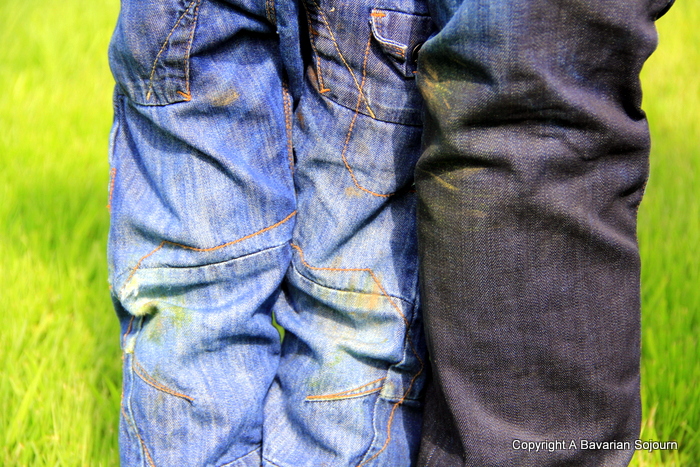 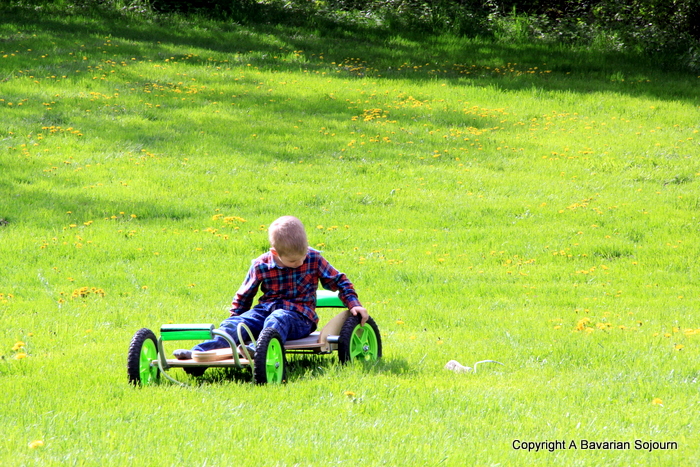 The shot above is one of the final pictures I took of the day, and is definitely my favourite of the lot.    “Do you think Father Christmas might bring me one of these?” he implored whilst lovingly stroking the wheels.   I said he might if he was actually good enough (and added the Kart to my future blackmail/Christmas shopping list I keep in my head – it’s not that reliable!)   “I really hope he does ” he added thoughtfully “because if I had one, I would go on it all the time”.     This combined with the “one million”  answer to my “how many out of ten” question I usually ask after a day out says it all don’t you think?

Pulling back up the hill equipment (aka Mr R), alpine air and blue sky not included …. 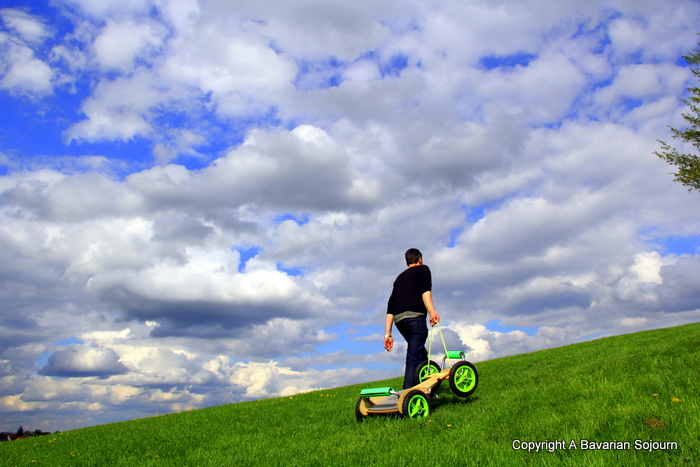 *disclaimer:    It was my idea to kind of review the ATK, and did so gratis because we loved it so much, all in return for an afternoon of high-speed fun in the fresh air…