Thankfully, the Christmas tree is finally down – something I have been itching to do for days.  The poor thing didn’t apparently like underfloor heating, and ended up looking like something out of Jurassic Park!   My inner superstitious fool didn’t want to take it down before 12th Night, especially as today is a special day set aside for eating any treats left hanging on it!

Epiphany is a holiday here, and is also referred to as 3 Kings Day.   I had seen groups of children wearing cloaks and crowns wandering about, and thought it was for a pantomime or something…  It turns out they visit houses the night before 12th Night, and bless them in return for charity money, leaving chalked symbols above the door in order to protect them from fire or flood in the year ahead. I remember seeing these symbols above doorframes on my first visit to Munich, and now I know what they are for! The 3 Kings didn’t come to our house last night though.  With my husband’s track record of setting things on fire in the kitchen, and two small children with a fondness for running water, I could have done with a visit quite frankly!

Our guests, my Dad, Step-Mum and my Sister left yesterday as well (although I wasn’t as keen on them going as I was the tree obviously!). Last year we treated them to -11 temperatures for New Year in Denmark, so we couldn’t let them go without a little extreme weather from Deutschland as well! It looks like Mother Nature agreed, and she laid on the most almighty storm with winds so strong I wouldn’t be surprised if there’s a witch under one corner of our house today. At least the trip home was much quicker for them than on the way out, if not a little bumpier!  It was so lovely to have them here, and it’s always hard to say goodbye now we are not around the corner from each other anymore. It takes a couple of days for me to adjust to them not being here, but looking on the bright side, it also feels like the New Year has started in earnest now we are (almost) back in our usual routine!

I think they are probably pleased to be back at home for the rest!  Their over-enthusiastic tour guides (us) took them to plenty of places they themselves hadn’t yet visited, and dragged them around all over the place!   We went to beautiful Tegernsee (once we had all recovered from New Years Eve), a lakeside town nestled at the foot of the Bavarian Alps (I expect we will be visiting again in the near future, especially now that my ski-fiend of a husband has sussed out all the ski-hire possibilities for the Small People).  We had a great snowy day, appreciating all the beautiful alpine scenery, fainting at the house prices, and indulging in the rib-sticking Bavarian dish of käsespätzle (cheese noodles topped with roasted onions) for lunch, whilst over looking the lake! 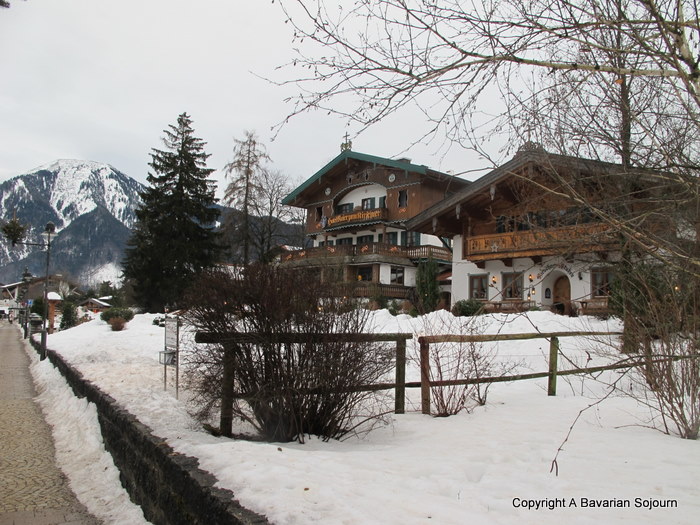 We went into town a few times too of course!  The Viktualienmarkt proved very popular (and my Dad who can speak German, went on his own culinary journey through Bavaria, starting at one end of the market with a bratwurst, and sampling cheeses, bread, beer and speck all the way around!)  I did have to stop my family paying a visit to the Butternut Banshee however,  where I think they wanted to do a kind of  “picking up produce flashmob” especially for her!

On their last day here we braved the torrential rain, and went in to town again so they could witness the Glockenspeil at the Four year old’s request!  He adores the  knights that joust at the top of the Rathaus as the clock strikes the hour, at 11am and 12pm each day (and I think on some evenings as well?). I am sure it also played “O Tanenbaum”, but don’t quote me on that!

Then at my Dad’s request we had lunch at The Hofbräuhaus (one of Munich’s oldest and more famous bierkellers) where we had a giant pretzel eating competition, and  sampled some of the beer that they are famous for!  Unfortunately on this occasion I was the designated driver, but I can confirm that the alcohol free Weissbier is also nice! ! It is touristy, but it’s worth a visit, even if it’s just to say you have been!  The cavernous hall was packed to the rafters by 12.30, but the oompa band provided great atmosphere, and having to share the long tables with other guests forces you to talk to them even if you didn’t want to (but I expect the beer helps with that!)!

School starts again next week, those early mornings loom!     It only seemed like two minutes ago that we were putting that blinking tree up!…