I first tried this a couple of weeks ago on a Sunny Munich morning.   The cafe’s shelves were heaving with trays and trays of this stuff, either plain or with streusen (crumbs!  The waiter was grateful for my help with the translation of this word to aid his tourist cake pushing prowess!) so I figured it was a speciality and tried a slice, for breakfast.  It has fruit on it, it can’t be that bad a start to the day?   And as it swiftly disappeared, I wondered why nobody had actually told me about it before – it’s amazing.    If you are in Bavaria and come across this, and you do not actually try a piece, then you cannot call yourself a lover of cake OK? 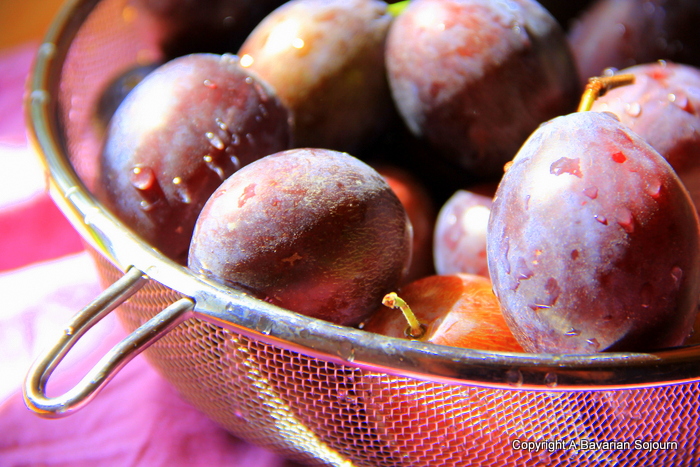 Made with Zwetschgen, tiny hard plums from Italy that are only available at this time of year (they are the plum of choice as their firmness works well in the baking process), sandwiched between the sweetness of the crumb and the pastry, their tartness works particularly well.  Should you not find any in your neck of the woods, then I think apricots would work equally well, or apples possibly, and I would give it a go with Damsons too!

You will find Zwetschgendatschi in two forms here, one with a dough base, and the other a short crust bottom.   The short crust version is by far my favourite.  I am not saying I wouldn’t eat the dough bottomed version if someone put it in front of me again, but having tried it, it kind of reminded me of Yorkshire Pudding, and as much as I am partial to Yorkshire Pudding, I am not that keen on it with plums.

Faced with a day at home yesterday with a grumpy unwell five-year old (not that sick that he couldn’t help bake though funnily enough), we decided to make our own.   It’s a  bit of a long drawn out process, but I promise it’s worth it…

First we made a sweet short crust pastry and stuck it in the fridge for an hour to rest.  While it was putting its feet up, we got busy with the plums and de-stoned them and sliced them up.  Pastry ready, we then squished it into a couple of 26 x 20cm tins, and pushed the sliced plums into the pastry, like so… 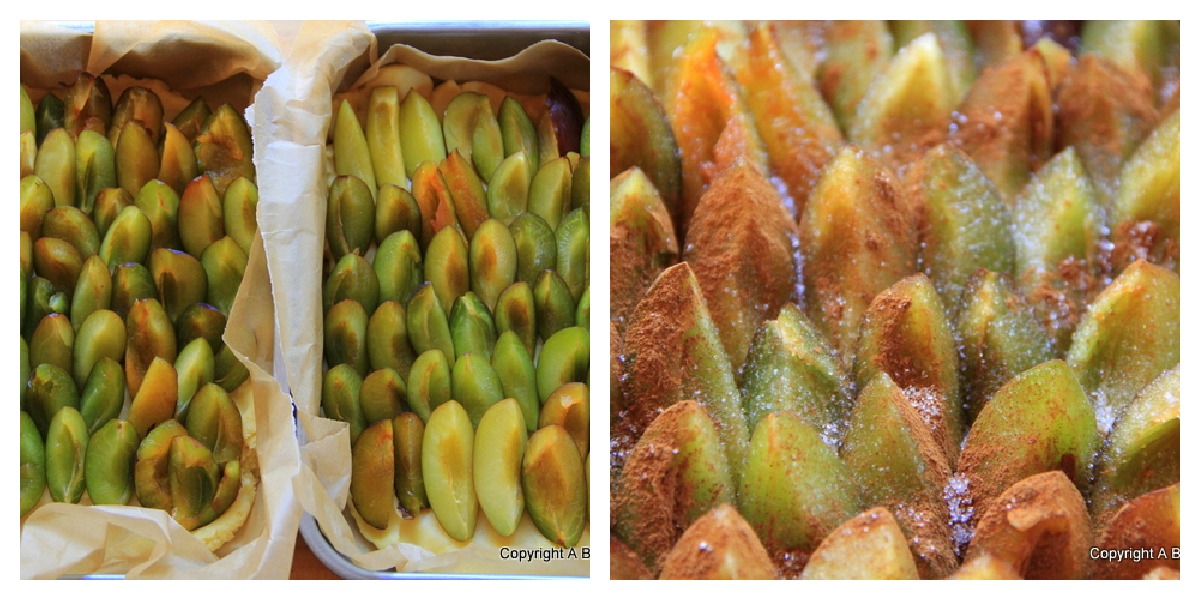 Masterpiece finished, we sprinkled over a (rather generous thanks to my helper…) tablespoon of cinnamon (not a problem – I am a cinnamon addict), and a tablespoon of sugar.  We then made a hasty crumble topping, and stuck it in the oven for 40 minutes at 190deg.    Even though I say it myself (and admittedly, this is probably not the exact recipe used by every Bavarian Hausfrau), it tasted pretty much identical to the one I enjoyed at the sophisticated bakery the other morning for breakfast.    They might also tut at the fact that I served it with Birdseye Custard but it was sehr gut!

Perfect stomach lining material before heading out to a certain Bierfest that started today?  I am going later in the week, I will report back!