I am still not sure what I want to be when I “grow up”.   I don’t think I ever have been if I am honest, having changed my mind at least a hundred times over the years – and it looks like The Seven Year old will follow suit!   In the past she has professed to wanting to be a dolphin trainer, a ballet dancer, a belly dancer and a Judge (hopefully not all at the same time), but a few days ago she informed me that she had made her mind up once and for all.   And what is her career choice de jour?    A Salt Miner.    Yes.    Although, I have to say after our trip to Das Salzbergwerk at Berchtesgaden I am not surprised. 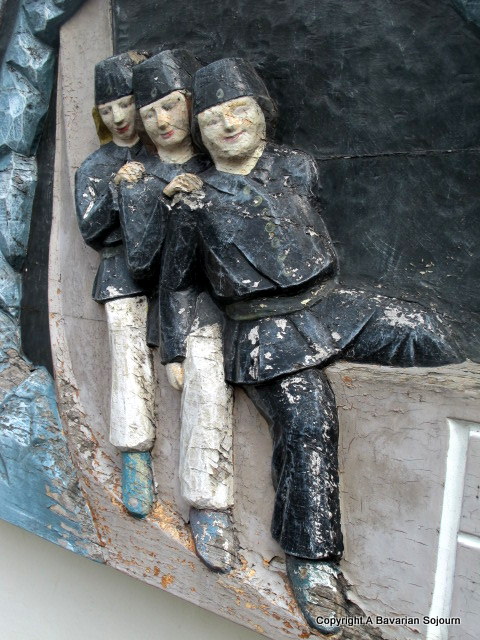 The tours of the mines are every twenty minutes, and during busy holiday periods you can book online the day before, if you’re worried about a long wait, or a wasted journey…   I have to say that I am not sure any journey to this part of Bavaria would be wasted, it’s absolutely beautiful, and there’s plenty more to see and do in these parts, (drive the panoramic route, it’s just stunning!), and there are lots of  “Heidi” houses (as they are known in our house) to spot along the way! 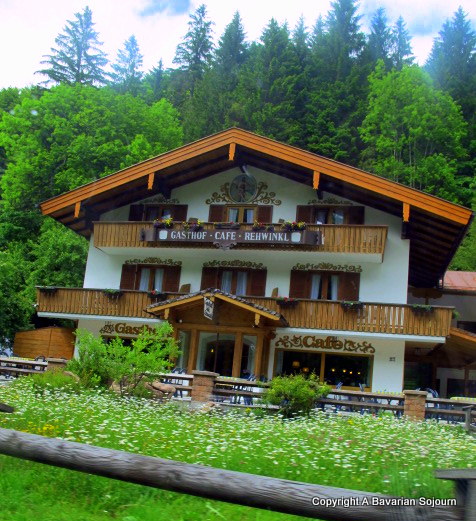 After a nice lunch at the restaurant over the road, we joined the next tour.   We were kitted out in (very fetching) blue overalls (to keep your own clothes dust free, and for the amusement of the staff I imagine!),  and then bundled onto a very cute little green train that was to take us deep into the heart of the mountain.

The first stop was the cavernous “Salt Cathedral” where a laser light show depicts how the salt crystals are formed.   You are given little audio guides if your German’s not up to scratch, but touch any buttons on this at your peril (the guide will come on automatically at various points of the tour, so you don’t need to press anything, OK?!)!   Trying to frantically re-tune your device from Russian in the dark is quite tricky, and somewhat distracting to those around you!!

It is also here that the first miner’s slide awaits…   I think this is what drove the Seven Year old towards her future career choice actually, they are just brilliant!    Made from polished wood, the slides are still used by the miners to travel through different levels throughout the cave system, and even I am a little jealous that they get to do this every day!

Unfortunately no cameras are allowed,  but to be honest there’s not much point anyway as it’s very dark (as you might expect!), and it might be quite tiresome to have a load of “flash-blinded” people staggering about and getting lost down tunnels.    But never fear, as with a lot of these places, there are opportunities to buy photographs at the end – that you may like for posterity’s sake, or simply because you just look so incredible in that particular shade of blue!

Our tour continued through the more technical descriptions of salt extraction, which we found interesting, but I am not sure my two heard any of it,  they just wanted to know where the next slide was!   They didn’t have to wait long, the last (and longest) slide waits to take you down into a chamber where the “Mirror Lake” awaits.   Looking like some kind of sci-fi. moonscape, The “Mirror Lake” is actually the reflection of the cave ceiling in the still surface of the lake below, and it’s quite ethereal.     After being given time to admire this (and to wait for the rest of the party to get down the slide), a little ferry then took us across to the other side of the lake, complete with another “crystal” light show for the journey…

And it doesn’t end there… After inspecting a few more aspects of mining life, a funicular train awaits to take you back to a higher level again, and where the train awaits.   Before departure we were each presented with a tiny container of salt from the mines themselves.   Then a short journey later (and a fake explosion for some strange reason), the train takes you back to the surface (blinking like moles) into the daylight again.

And  actually, I think I have changed my mind again,  I think I would quite like to be a Salt Miner too!  It was a great trip, and I wouldn’t hesitate to take guests back there just so we get to go on the slides again. 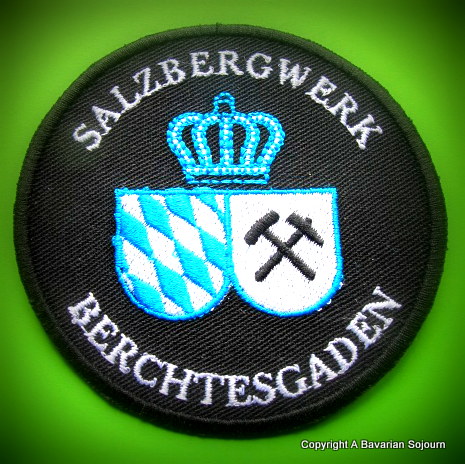 My badge, which I will be sewing on when I get in…