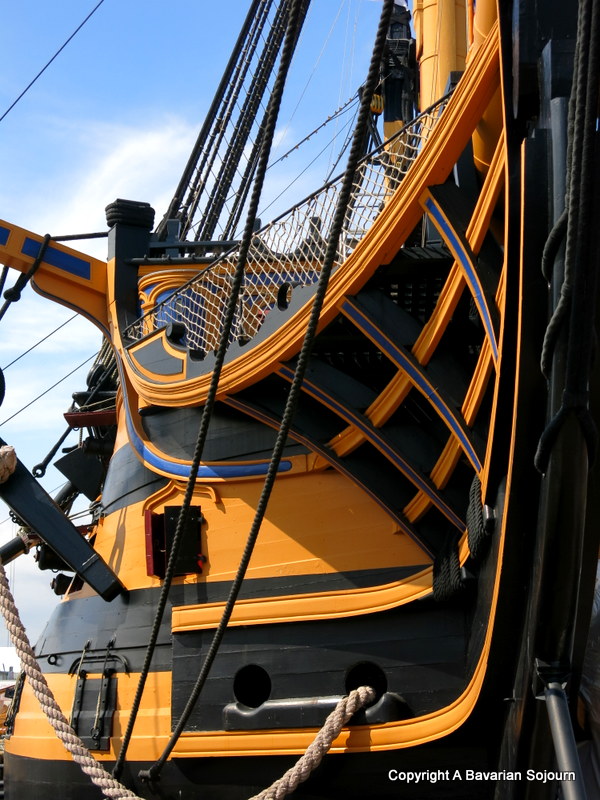 We took a little trip to Portsmouth when we were back in the UK over the summer.  It’s not too far from my Mum’s and with interests piqued thanks to bookworms pouring over the guidebooks they had discovered on her bookshelves (she used to work for a publishing company), the Small People more or less went on and on about visiting until we gave in…

It’s always a bit of a strange but nice feeling being able to take my children to things that I visited as a child, as typically we are busy discovering things together in pastures new – but when it does happen, it’s pretty special, and this was a real trip down memory lane for me as well…

HMS Victory stands alongside several other points of interest in Portsmouth’s Historic Docks, including The Mary Rose (which we also visited, but I will report back on that another time), The Historic Boat Workshop, The National Museum of the Royal Navy besides many other things.  I think it would be fair to say you need at least 2-3 days to explore everything thoroughly if you are a true enthusiast. 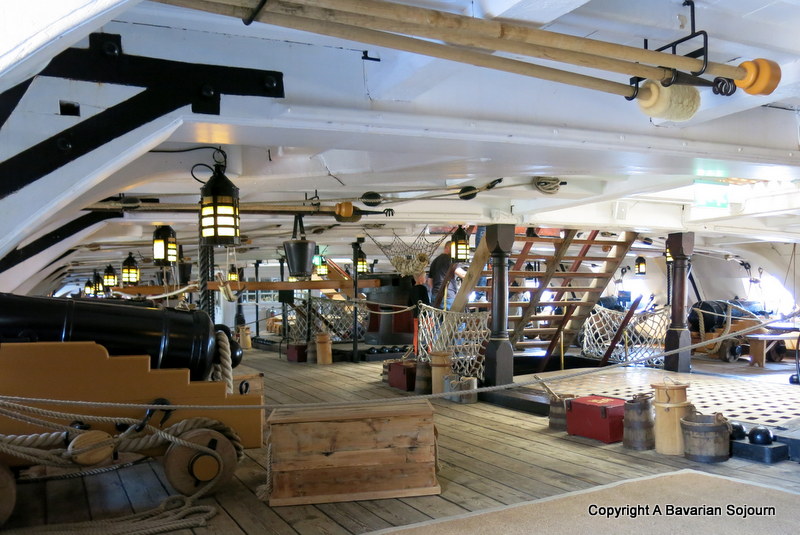 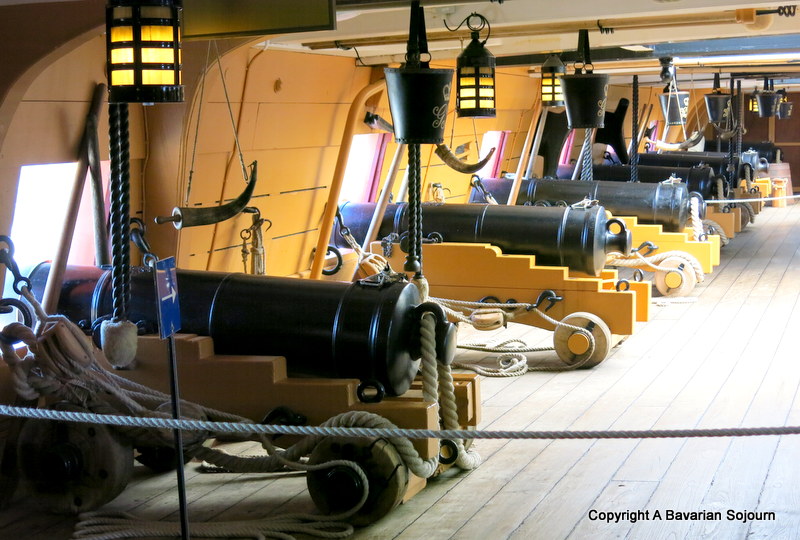 The Royal Navy’s most famous wooden Georgian War Ship will take you a just over an hour to scrutinize thoroughly in the company of two tiny history enthusiasts, taking into account the scrambling up and down of many different levels (watch your heads!) and imagining what life must have been like back then in the days of the Battle of Trafalgar and beyond aboard such a vessel…

In service for over 206 years, this ship is still commissioned by The Royal Navy, so there are days when it is closed off to the public.

Although there are guided tours available, the information on display is in-depth, and allows a glimpse into what life must have been like back then, from the hammocks swinging above the enormous cannons on the gun deck, and the Galley complete with stove that sustained over 800 men. 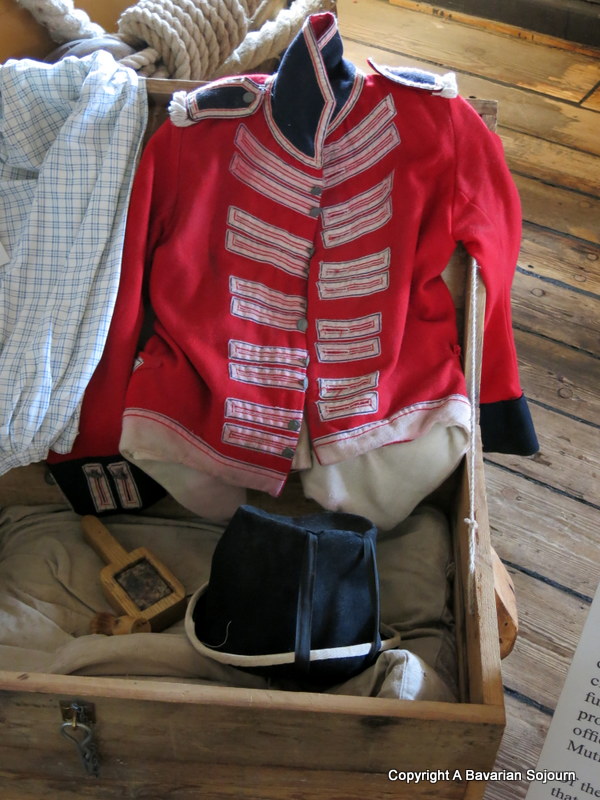 We did note however, that included in their daily ration was almost 7 pints of beer so it’s a wonder that they were victorious in anything apart from falling over, especially on choppy seas.

I like to think I would have been quite at home in the magnificent Great Cabin for the upper echelons of the crew – I bet those dining in the grand dining room had more than porridge for tea! 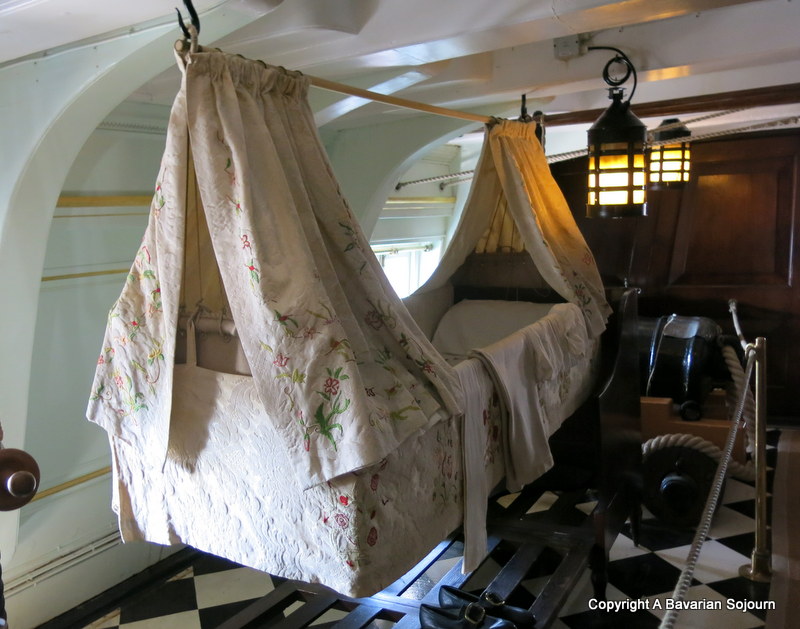 I had to laugh as next door to the dining room hangs a rather grand embroidered swinging hammock, which the Small Boy initially thought was a cot (although it belonged to Mr Nelson himself, made to measure in fact!) exclaiming “well that’s a stupid place to put a baby, right next to a cannon”.   I have to say I agree with him on the cannon matter, whoever might have been sleeping in it – talk about a rude (possibly heart attack inducing) awakening! 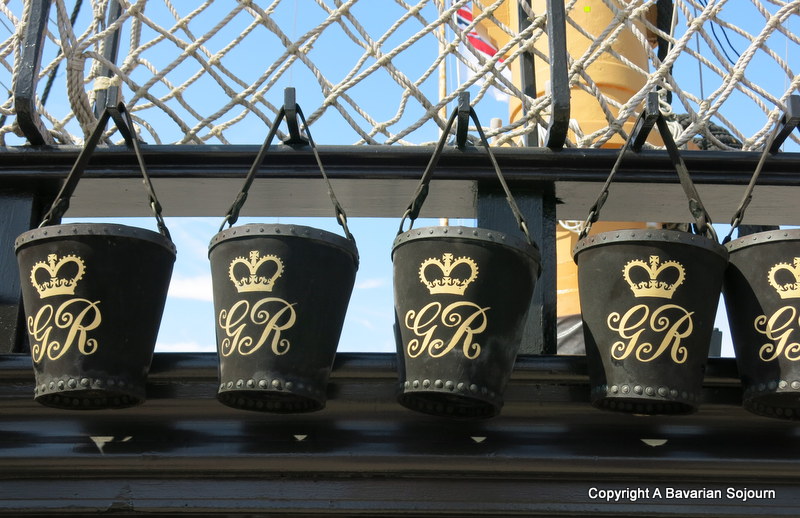 Keep an eye out for the detail in places such as the little kitchen store-room, the grotesque operating theatre below deck, and the iron stocks for those who hadn’t been behaving quite so well.   Also definitely worth keeping your peepers open for is the simple plaque that marks the spot where Vice Admiral Nelson died a heroes death during the Battle of Trafalgar (but not before being taken down to the operating theatre mentioned above!)…

All in all this is a great place to explore with any mini-history fans you might know, but do bear in mind the ship is currently undergoing a massive conservation/renovation project, so parts of it are currently cordoned off.  It really doesn’t detract from a visit so don’t let it put you off however.

It’s definitely worth checking out the Tickets and Offers page on the Historic Dockyards site, as this is the most cost-effective way to plan your day, and you are able to combine it with other attractions.   To visit HMS Victory on its own is £18 per adult, and £13.

Open times from 10am everyday throughout the year, except when closed on Christmas Eve, Christmas Day and Boxing Day. 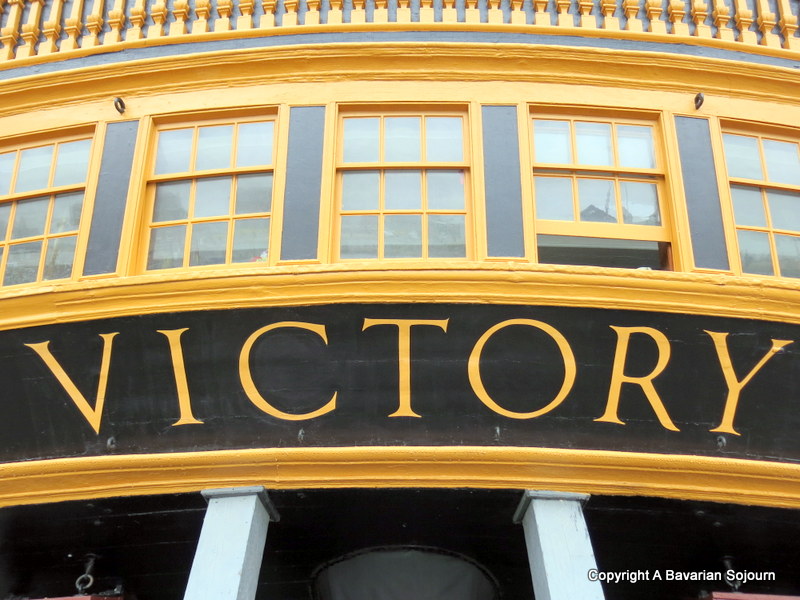