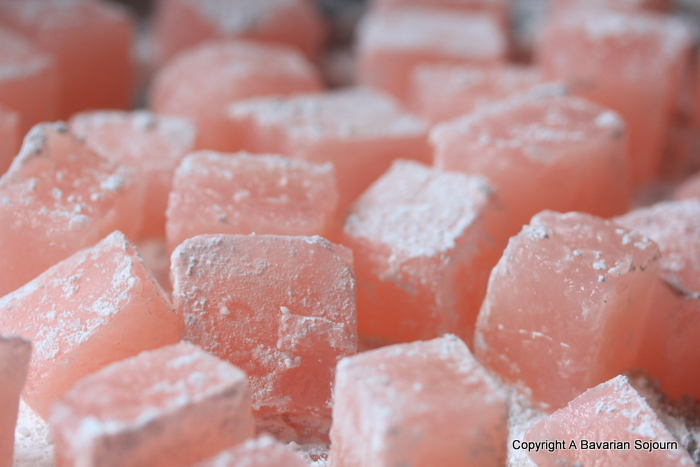 In order to give you a little bit of a break from my incessant photography of Sarajevo (but never fear, you will be subjected to more very shortly!), and seeing as I have been pretty much stuck in the kitchen (having to wait for workmen etc) whilst the flood water in our basement slowly subsided, (not to mention the fact that I have been slightly obsessed with the idea of making this since I got back from Bosnia!), Ladies and Gentlemen, may I present to you an attempt at the original food of love – Turkish Delight (more commonly known as Lokum in Eastern parts)…

I am not going to lie to you, it perhaps wasn’t the easiest thing I have ever made, but when the pretty pink powdery cubes turned out to taste quite authentic, it cheered up this semi house-bound haus frau no end!

I don’t think anyone is entirely sure of it’s origin,  some stories involve amorous sultans on missions to impress countless mistresses, whilst others credit its creation to a Turkish sweet maker, whose small packages of Lokum were bought as love tokens.   Both stories involve love though I will give them that, and the spice shops of Sarajevo too were full of people on the search for packages of Lokum to take home to their loved ones.

I did let my loved ones try a few squares of this homemade version, but I might have eaten more than my fair share…

You will also need:
A tin of around 8 x 10 inches (or thereabouts), lined with baking paper and given a good brushing with vegetable oil.   A sugar thermometer;

Combine the sugar, lemon juice and 340ml of water together in a pan, and stir constantly over a lower heat until all the sugar has dissolved.    Slowly bring to the boil, then turn down the heat and allow to simmer until your sugar thermometer reads 115Deg C. Take off the heat, and get started on the next bit…

In a different pan, combine the cream of tartar, 120g cornflour, and the rest of the water, whisking together (getting rid of any lumps) over a medium heat until it starts to boil.  Then watch it like a hawk until the milky liquid begins to thicken, and starts to resemble PVA.

Pour the contents of one pan into the other, and stir constantly over low heat for five minutes. Reduce heat further, and simmer for an hour.

When (and only when) it becomes golden in colour you can stir in the rose water, and a couple of drops of food colouring (if you are using any).  Pour the molten lava into the tin and leave to cool completely overnight. 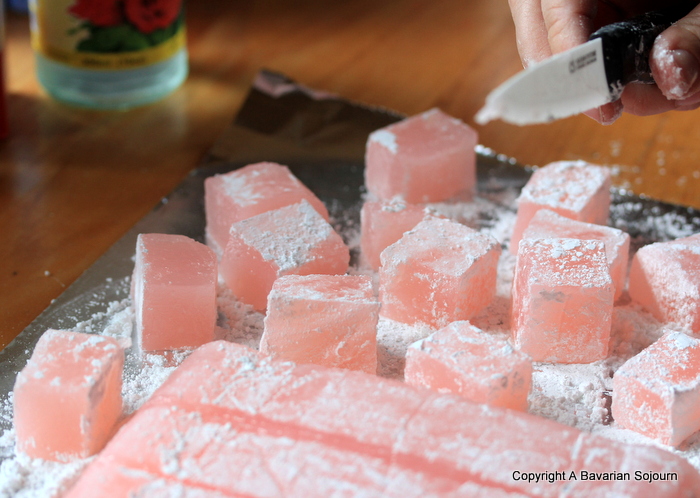 Carefully run a knife around the edge of the tin, and turn out onto a tray covered with baking paper (I had run out – foil is not good by the way!) dusted liberally with the rest of the icing sugar and the cornflour.   Dip a sharp knife into boiling water and cut into cubes, turning gently in the flour/sugar mixture (adding slightly more if necessary). Cover with another sheet of baking paper, and leave to dry for at least another day (or slightly longer until it has firmed up!) .   Add a touch more flour and icing sugar if you need to, put in a lovely box, and give to your most loved one… whether or not that’s yourself, is completely up to you!

And if you don’t like the taste of roses, you could always try it with a couple of drops of peppermint or orange oil instead?  Or perhaps you could go a bit retro and go use violet oil for some parma violet Turkish delight?   You could of course go plain with lots of roasted chopped pistachios, but then again you might choose to go to Istanbul or Sarajevo and get some of the real stuff…  I will leave that decision up to you…