We have always had Stollen at Christmas, ever since I can remember anyway.  Perhaps one of my earliest Christmas food memories is being handed thick; haphazardly cut slices to wash down with hot chocolate, half choking on the icing sugar coating in the rush to be the first to get to the marzipan in the middle!   My children hate marzipan, which I think is odd.    I had thought they might get used to it in the two years we spent in Denmark (another marzipan loving country, where all the children’s sweets seem to be either marzipan or liquorice), but they avoided it like the plague, which secretly I am pleased about that – more for me!

Anyway, now that our usual English Christmas Cake is tucked away in the cupboard (probably sleeping off a hangover after all the brandy I have been force-feeding it), my inner Haus Frau commanded me to have a go at making my own Stollen to go with it…When in Rome and all that! 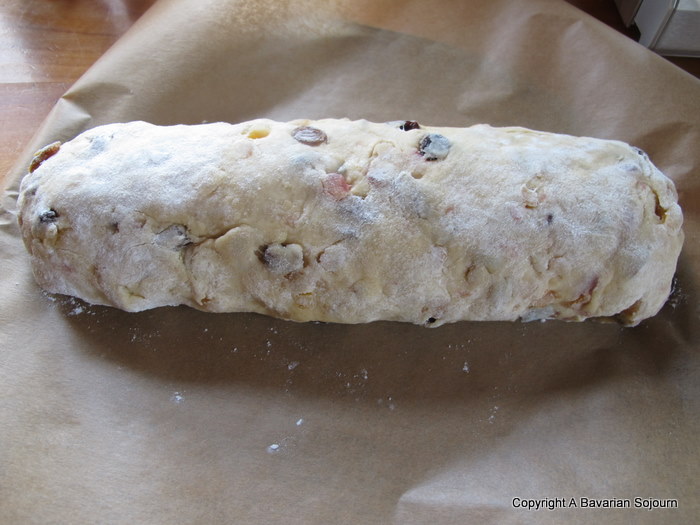 The Stollen apparently originates in the fifteen century, where it was made especially for the Advent.  The Advent was then a time of fasting,  so it would have contained no butter whatsoever.  Nowadays in some instances, a stollen can contain more butter than your average dairy.   One recipe I found contained six packs altogether, which I felt was ever so slightly excessive ( but no doubt tasted amazing)!   After trawling the net I settled for this recipe as it looked to be the most straightforward.  I am pleased that the “six packs of butter Stollen” didn’t ever come to fruition, as I now realise the ingredient amounts were so huge, it would have turned out to be around the size of our kitchen table (and this is the “Bavarian Chunk of Tree That Will Still Be Standing After The Apocalypse Table”), and would have taken all of 2012 to eat!

It turns out that Stollen is actually pretty easy to make, if not a little time-consuming (all that waiting for dough to rise when you are an impatient cook is quite hard…).  However, the most difficult part was when it was freshly out of the oven and coated in melted butter and icing sugar, the whole house smelled amazing!  At this point it turns out you are supposed to repeat the butter and sugar part, and then wrap it up and store it for up to two weeks.  Let’s just say that as much as I wanted to do the whole thing authentically, there was absolutely no chance that storing it without trying it beforehand was ever going to be possible…!

We ate it whilst half choking on the icing sugar coating in a rush to get to the (still hot) marzipan in the middle…  Christmas Cake German style!