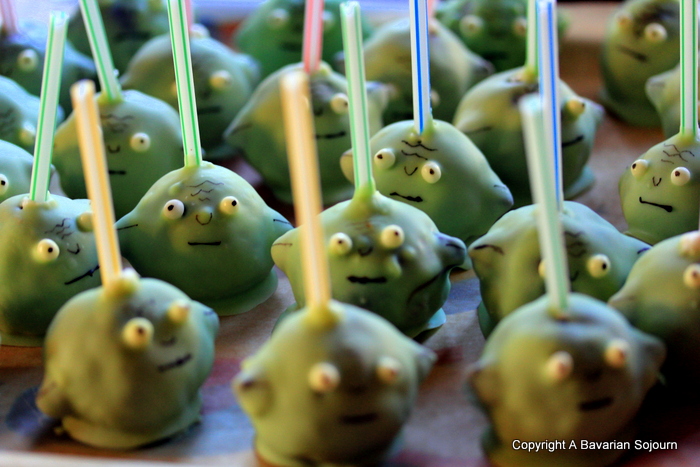 Last weekend,  Small Boy turned Six.   It’s taken forever to write about, as a couple of the household have been in the Grip of the Grippe (flu), of which Munich is suffering in endemic proportions right now.

I guess I was asking for trouble endeavouring to make The Small Girl’s Owl Cake Pops in his presence the other week.     His Lordship was hovering in the kitchen whilst they were being cobbled together, and being as Star Wars crazy as he is at the moment, he announced that he would be taking Yoda cake pops into school for his birthday.    Yoda blinking cake pops…

But as each birthday comes around, and I feel ever more guilty for ripping them away from the vast majority of their family in England (meaning the poor creatures usually  have to make do with their parents only on their special days),  when it comes to birthday treats he could probably ask for a life-size X-Wing Fighter cake (yes his obsession is that bad that I am beginning to learn the names) and I would at least have a go at making it…

Anyway, Yoda cake pops were probably as much of a pain in the bum as it turned out.     Forget any kind of coloured chocolate melt things being available here, I always knew it would be a case of food colouring and melted white chocolate, except that melting white chocolate is not always straight forward.   One burned and ruined lot and a quick drive up the road to the nearest shop later, the Yodas began to take shape.

If like me you have a Luke SkyWalker wannabe in your house, and you would like to have a go, follow all the steps of “Eight” until you get to the “gluing on of the ears” part…  Of course Yoda has ears on the side of his head not the top, so make sure you use enough buttercream to stick them in place and make sure they are properly chilled through before attempting to dip them in the melted, coloured (and cooled) white/green chocolate…    When the chocolate is just beginning to harden, stick a couple of eyeballs on (white chocolate cake decoration things) and swear as they fall off.   Repeat as necessary.       Stick them back in the fridge and hope for the best.  Go to bed and have a sleepless night.    Get up at 5.30 the next morning and search manically for the black food colouring that hasn’t been seen since the Owls that should have gone to Specsavers.   Find said food colouring and then hunt for something small enough to “paint” Yoda’ features on with.   Find a toothpick – make do.    Get slightly carried away trying to paint on wrinkles, and then wipe off frantically and go for the less is more option.       Await the appearance of the now Six Year old (who is by now super excited about taking the Yodas into school), and breathe a big sigh of relief as he says “I think they are really good” –  grateful that he didn’t see the resemblance to the aliens in Toy Story as a few other people did!!

Anyway, at least that part’s over for another year.     On his actual birthday itself we went to Therme Erding which he enjoyed immensely (more on that another time!), followed by the afternoon spent building his birthday Lego X-Wing Fighter, which I reckon is much easier than any kind of Star Wars cake I can tell you!

Happy Birthday my beautiful boy.    It’s hard to believe you are really really 6.     However guilty I feel as an Expat parent about some aspects of your childhood, in others you are just thriving.   I love watching you mix with ease with your friends from all four corners of the globe.     I watched them sing happy birthday to you in the incredible array of languages you have in your class, and hoped the teachers didn’t notice me shed a tear or two .  I am proud of you my sweet.  If you carry on the way you are now,  gentle, kind and empathetic, you will go so far. 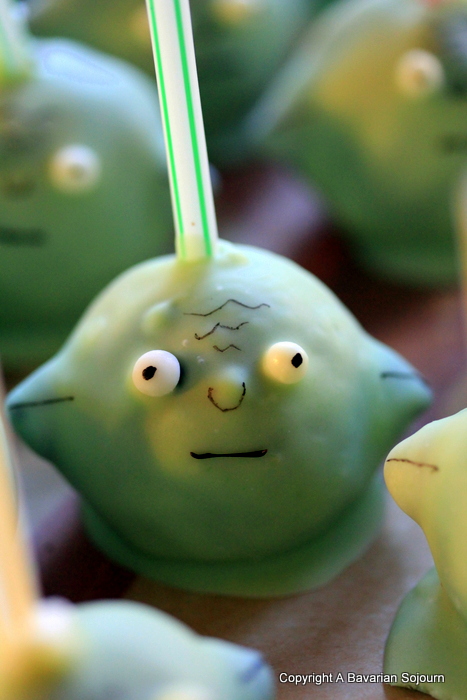