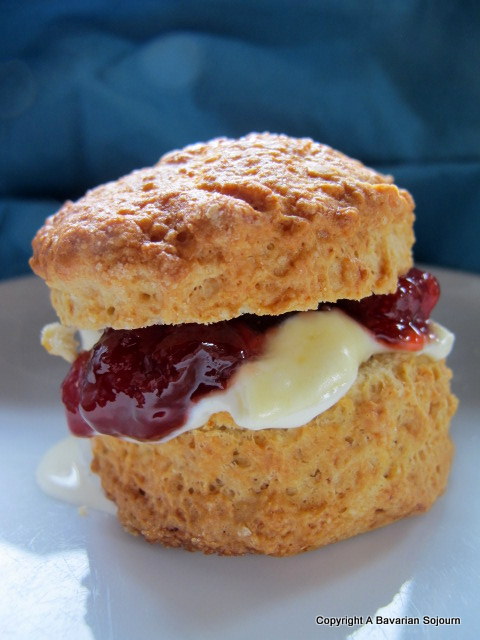 Scones.  Something English to celebrate us being here for 6 months.    Six whole months!  I can’t quite believe we have been here for half a year already!

In our household, it is against the law not to celebrate such monumental occasions with cake.    But what’s a scone without clotted cream?   A cream tea without cream?  A sorry thought…  That is until Mr R. saved the day by deciding to make some.  I didn’t actually realise it was possible, but it is, he’s not just a pretty face you know!   It probably works best with unpasteurised cream, but needs must, and not having a cow to hand we made do with the carton of single cream in the fridge.    And if you are a desperate Expat in need, then here’s the recipe:

Put the cream (we used 350ml) in a shallow oven proof pan with a lid. Place in the oven on the lowest setting and do not disturb (we left ours overnight – roughly 9 hours). Get up in the morning expecting to see a burnt pan, but instead leave to cool, and then carefully skim the clotted cream from the surface (discarding the liquid, or even better making hot chocolate with it!) Give it a quick stir to combine and stick it in the fridge. Bobs your uncle!

I used this recipe for the scones, it was straight forward (once we “made” some self-raising flour, another bane of expat life!), and they turned out well enough for me to bookmark it for future use.

It’s funny to think that this time last year we didn’t have a clue what was happening, or where we would end up!  Am I pleased with where we did end up?  Yes, I really am.   And at least we are close to home, it never gets any easier missing friends and family…

I am now a student once again – the German lessons have started in earnest.    Not that much seems to be going in at the moment, but I can at least understand a bit of the weather forecast on the radio in the morning, an important topic for an English person!   And I start teaching those English lessons in a few weeks, which will be interesting!!

Most importantly though,  both Small People are still loving school.   The Five Year old has joined the football team, although his father (a life long Saints fan) is not that happy about him sporting a Bayern FC strip (But as I reminded him, until his team were promoted again recently he hadn’t even given it a moment’s thought!)!!  The Seven Year Old has made firm friends and is thriving.  She is however currently less than impressed about her forthcoming role as The Gingerbread Man in the class play (she was initially over the moon about being chosen, but then it slowly dawned on her that she would be playing the part of a gingerbread MAN.   I have hopefully managed to defuse the situation by promising to spend an evening butchering the costume in the hope that by adding plenty of feminine bows, buttons and glittery things, it will emasculate it enough to be considered suitable by the wearer…)!

So here’s to the next Six Months, and a huge thank you to those of you following us thus far.   If you’re quick there are some scones left!  The cream’s in the fridge!