He might have had slightly questionable millinery sense, but I think the Mad Hatter had pretty good culinary taste judging by the comment above.   Although I disagree with him about the cold part – crumpets are definitely best enjoyed hot (and as with most home baking they are best enjoyed within 24 hours of production – not that any lasts that long in our house!)…

I warn you now though, this recipe isn’t perhaps the most straight forward! As I discovered, they can be a little bit fiddly what with all the temperature and consistency adjustments!    But, give an English Expat a sudden need for tea and crumpets on a cold and wet Sunday afternoon in her temporary land of residence, and nothing will stand in her way of at least attempting to recreate a little taste of home!

The humble crumpet is quite the iconic British tea-time treat, along with the magnificent scone and the odd cucumber sandwich (not all that common in our house, but if you’re making them, do so with white bread, lots of butter and crusts off please!). They can also cause much confusion amongst non-Brits as to what they actually are…  All you need to know is that if Downton Abbey were in fact real, the entire mansion would be eating these on a regular basis both above and below stairs!

Originating in the 16th century, we have the Victorians to thank for how we know crumpets today thanks to their addition of baking soda to the batter, which created the famous sponge like holes – so perfect for soaking up all that melted butter (and Golden Syrup when we have any!)…

This recipe is one slightly adapted from The Great British Book of Baking (what else?) –  which I would heartily recommend by the way.   It  calls for a special crumpet cooking ring, but as we have no such thing – a 4″ round biscuit cutter had to suffice (and worked perfectly well!), make sure you butter it each time though!    It also calls for Cream of Tartar – which again if you don’t have, any don’t panic  – there is a solution below!

Ingredients – Makes 8-12 (follow this recipe if you are using dried yeast and actually have cream of tartar!)

Sift the flours together with the cream of tartar. Add the dried yeast, then the lukewarm water and mix to make a batter, beating well for a couple of minutes. Cover the bowl with a damp clean tea-towel and leave in a warm place for an hour. After that time, sprinkle the salt over the batter and beat for a further minute. Cover up the bowl again and leave for a further 20 minutes. Add the bicarb to the warm milk and gently stir in to the bowl. Heat a un-greased heavy (and reliable in that you know it doesn’t normally stick!) frying pan, and when it’s very hot, place in the buttered biscuit cutter(!)…

Prepare for your first sacrificial crumpet (there might be a couple!) whilst you get the temperature and the consistency right! Add enough batter to half fill the mould. If bubbles don’t form straight away, add a little more warm milk, but if the batter is too thin, add a little more flour… Leave the crumpet for 7-8 minutes before taking off the mould (with a tea-towel I might suggest!) and flipping over and cooking for another couple of minutes. The crumpet should be golden brown on one side and lightly coloured on the other. Leave to cool (or eat straight from the pan!) and toast.

Ingredients – Makes 8-12 (follow this recipe if you are using Fresh Yeast and have no cream of tartar!)

Sift the flours into a mixing bowl together with the baking powder. In a jug, dissolve the yeast into 100mls of lukewarm milk. Add the water to the flour and mix to a batter.  Add the yeast/milk solution, beating well for a couple of minutes. Cover the bowl with a damp clean tea-towel and leave in a warm place for an hour. After that time, sprinkle the salt over the batter and beat for a further minute. Cover up the bowl again and leave for a further 20 minutes. Add the bicarb to the remainder of the warm milk, and then add to the mixture. Follow the rest of the steps in recipe 1 above.

And do you know what, if you only have the one biscuit cutter (like we have) the chances are you will get a bit sick of standing around making crumpets, so once you have at least 6 might I suggest you chuck the mould away and use the rest of the batter to make pikelets without the burning hot mould (she says looking at her scarred little finger!)  Add tablespoons of batter to the frying pan, and cook for 3 minutes each side.    These flat little pancakes are perfect toasted, buttered and eaten with just about anything!   A veritable teatime selection! 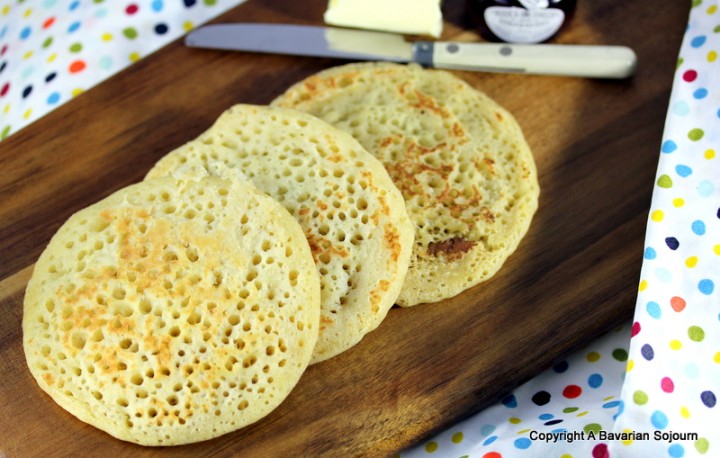 I love this article from my fellow Expat Essentials expert Deanna at Castles to Casinos,  entitled 5 Things I Would Never Have Eaten Without Going to Germany… I concur my friend, I concur!  I think my life has been made a little richer since having discovered the delectable dampfnudel!  :) 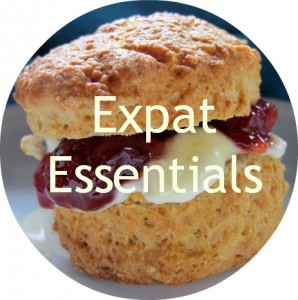