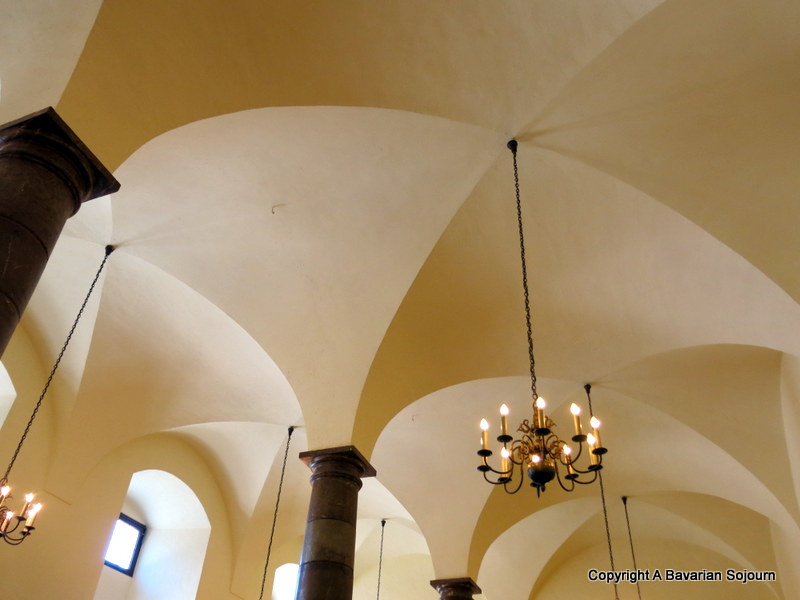 In our old life, as well as Royal Parks and Palaces, we had a certain city on our doorstep (as you’ve heard many many times).    Once children came along, and the daily commute into London was finally over for me after 8 long (but mostly fun) years, we found ourselves rarely going in to “town”.   I guess when you know that a place is always there, and you can visit any time you like, you never do…  It was easy to take for granted anyway.

And with Munich literally on our doorstep here, but with the knowledge that we most definitely aren’t “forever residents”, we try to pop in as often as we can.  There’s always a new area to discover, something we haven’t seen before, and of course the lure of foods that have become favourites, or that we haven’t actually tried yet.

And so, with the added urgency of the realisation that two of our passports are about to expire, and upcoming travel ahead, we ventured into town in almost near hurricane conditions (no exaggeration) at the weekend in order to get passport photos done, amongst other things.    Three failed attempts later (including one set taken with eye levels too low, correct formats rejected by me because I thought it was some odd lacy border – it was the biometric one that I needed – and one set rejected by the small girl because “she didn’t look right” and is currently far too young to realise that nobody ever looks “right” in a passport photograph!), and with successful photos now in hand it was most definitely time for lunch.

It might have been stormy, but the sun was shining, so we walked the length of Leopoldstrasse and Ludwigstrasse, and on to Odeonsplatz – past arches, lions (and on this occasions polar bears) and into another kind of Royal Palace for lunch – The Pfalzer Weinstube is housed in a wing of the Residenz, once home to Bavarian Kings and other important folk for around 400 years.

If you are visiting Munich but hate beer, and think you might have limited choices, fear not.   There are plenty of options to choose from in your average bier keller alone (including a wide range of fruit juices both with and without fizzy water, and usually a couple of wines too), but if wine is definitely more your thing, you might want to visit somewhere that specialises in that (purely from the Pfalzer region alone here though – the clue is in the name) and doesn’t even serve beer – this place should definitely do the trick.     Choose from thimble sized tasting glasses (OK, slightly bigger than thimble sized at 25ml), medium respectable sized glasses, or great big weinschorle (spritzer) glasses. 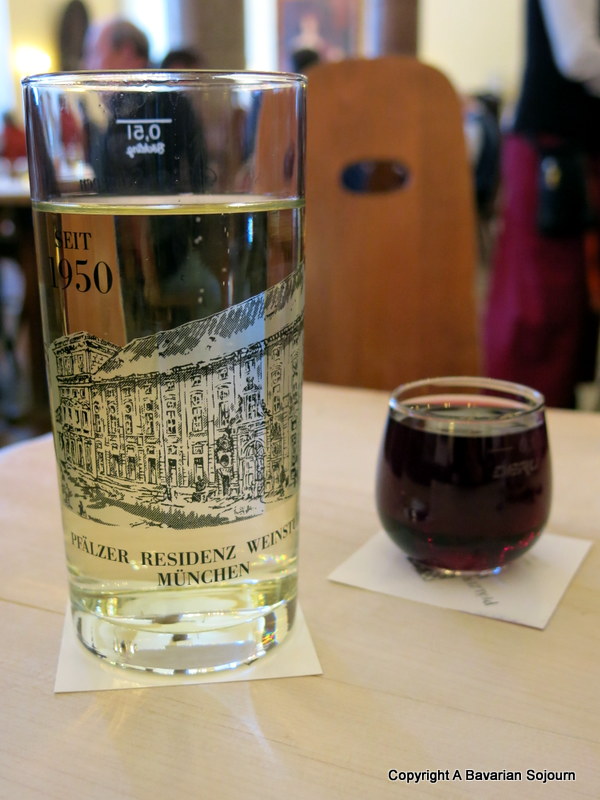 And the reason we often end up here after a walk about town (as well as the wine obviously)?   Demands of Flammkuchen for lunch from certain small persons.    This beautifully thin crisp dough, topped with creme fraiche, onions and speck is particularly good here, and served ceremoniously on massive chopping boards (a couple of which take up the whole table). 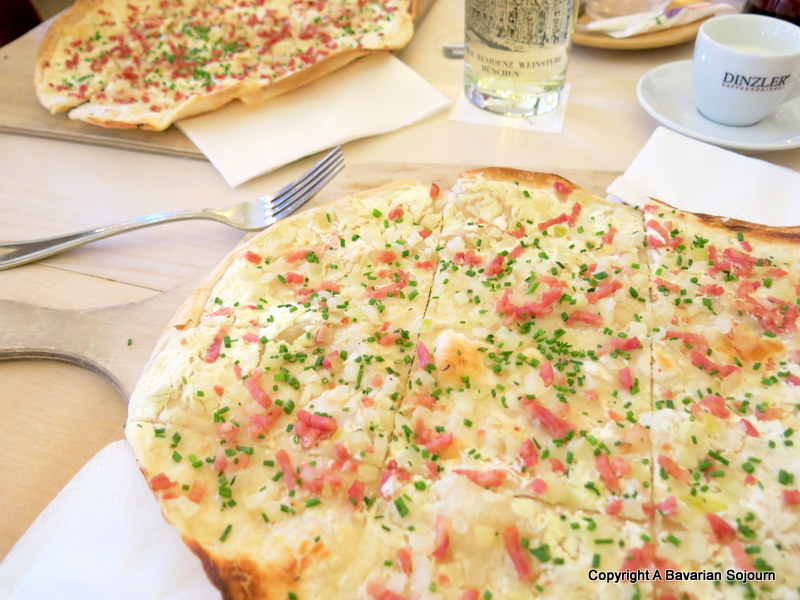 Do book a table in the front room on a weekend (during the week you can usually sit down wherever there’s a  space) where you have a choice of things to keep you amused – perusing the vast wine card, admiring the gorgeous vaulted ceilings, the people watching of locals that have been coming here for years, and/or admiring the glorious artwork (this place is attached to the Residenz after all).  Don’t wonder if the painting that looks familiar is Henry the VIII by the way – it’s not, he’s a Bavarian Prince apparently. 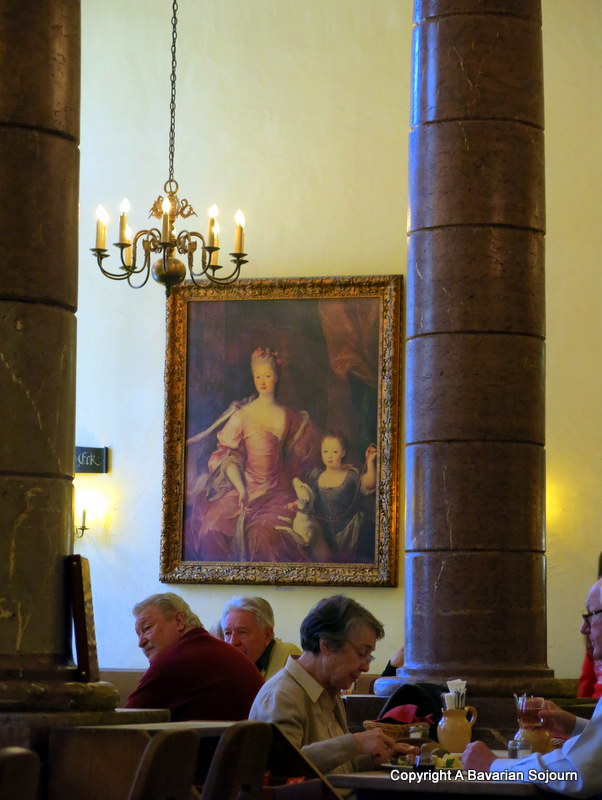 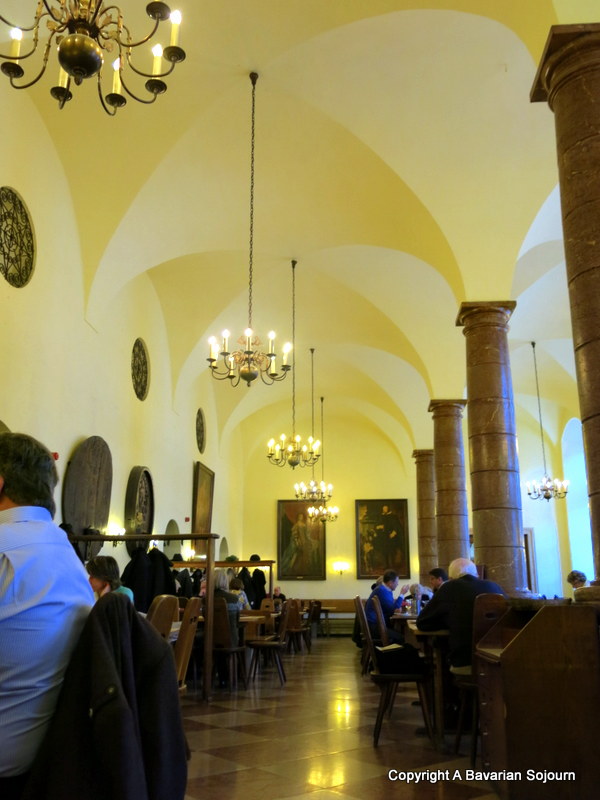