I blame my grandparents personally.  When I was around 9 years of age, they bought all of us grandchildren a subscription to The Young Ornithologists Club, or YOC for short (I wish I could find my badge), which also meant that we were sent a magazine every few weeks.   Helped by the novelty of receiving my very own post for the first time, this club was probably the first “hobby” I ever had.   I was so taken with the contents of each magazine and the information that they contained, that it used to keep me quiet for hours.   As a result, many a survey was conducted recording the bird activity in our garden.  I also enjoyed making them revolting lard bird-feeders (that unsurprisingly never got eaten) and keeping a (hawk) eye out for my little feathered friends in general.

To my amazement, one day I came across an owl pellet.   I had read about the contents of such in my Young Ornithologists Club Magazine, and found the very idea of dissecting a pellet to discover its skeletal contents intriguing.  Hoping to share this experience with someone, I presented it to my Dad.  It turned out to be a frosty cat poo, but I was praised for my enthusiasm nonetheless, and my fondness for birds has stuck with me thus far.  Not to the extent that I would go on a bird watching holiday or some such thing you understand, but to the extent that I always put food and water out for them when they are feeding their young, and especially in the winter.   I have also had several “pet” blackbirds that I like to imagine I have tamed with cupboard love (just call me the bird lady of Munich if you like), and one of my first crushes was Chris Packham.  I still find him strangely attractive now.

Therefore, I love the fact that we have lots of tiny birds in our new garden too.  We live quite far out of the city (I can’t get over how you can literally drive about ten minutes outside of Munich to be in the countryside!) so we are surrounded by farmland, and get to see quite a lot of wildlife, as we did in Denmark.  But (and this is quite possibly a reward for my youthful YOC devotion) we have a rather special “house guest” here – we actually have a Kestrel in residence in the roof.   Kes, as I have named him after the beautiful film by Ken Loach (which along with Tarka the Otter is guaranteed to reduce me to a sobbing wreck), apparently moved in around a year or so ago.  He lives in the gables above our balcony and can be spotted first thing in the morning before he goes out hunting.  I think he is trying to tell me that it is more his house than ours, as he leaves delightful “presents” each day.  The strange English woman putting newspaper out on the balcony each week must be a real talking point for the neighbours, but it’s necessary, believe me.

Anyway, unlike the deer and squirrels who visited us in Denmark,  Kes is quite camera shy.  I have decided to make it a mission to try and get a semi-decent photograph of him a) for you all to see how beautiful he is and b) so that you see that I am not making him up, and c) to send it to the Young Ornithologists club to get my picture featured, which was my greatest wish circa 1985… Observe and conserve! 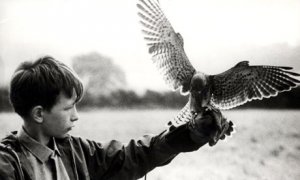