Like everything in my life at the moment (in that it all seems a little bit upside down and back to front right now) – I am starting with our last port of call during our Italia trip – to beautiful Bergamo (school started back again Wednesday, and I finally have time to plough through my notebooks and hundreds of photographs without interruption from “helpers”).   If you suspect this might be a picture heavy post, you are right – just to get the ball rolling! 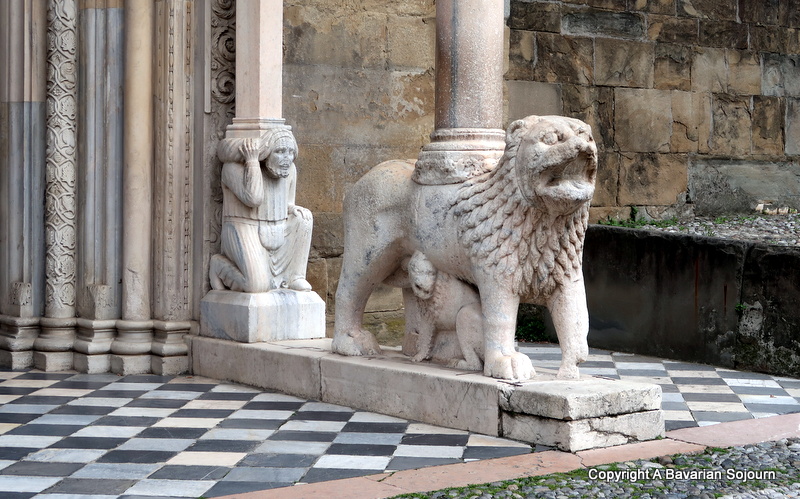 The name has nothing to do with Bergamot by the way (which, as Earl Grey is one of my favourite teas, I was slightly disappointed about).  I guess the clue is there though – “Berg” as in mountains, as a little like one of my favourite cities, it’s surrounded by mountains in the foothills of The Alps… It makes sense then that it’s also a great starting point for a ski trip in the surroundings.  When we first arrived, our taxi driver was enthusing about the “wall of snow” still in place, and that was just over a week or so ago…

It turns out I was rather unfairly expecting Bergamo to be a little sketchy perhaps given it’s the main Ryanair hub for Milan, but guess what?  It’s beautiful, has a fascinating ancient past, and is definitely well worth a visit in its own right, let alone during any extended Milan trip – especially given that it’s only an hour from there by train.

We caught the train to Bergamo from Milan at the end of our week-long trip, and as this particular journey was both cheap and easy, it made me almost weep at how expensive and ridiculous train travel can often be in the UK.

Having walked through the main station we were greeted by a life-sized model dinosaur just outside somewhat bizarrely,  hoping we might pay him and his friends a visit in the history museum in the citadel I expect (sadly not to be this visit!).   The sight of him made the toddler’s day, which meant we were then able to faff about without complaint or interruption as the rest of us wrestled with coins in the left luggage lockers by the bus station. 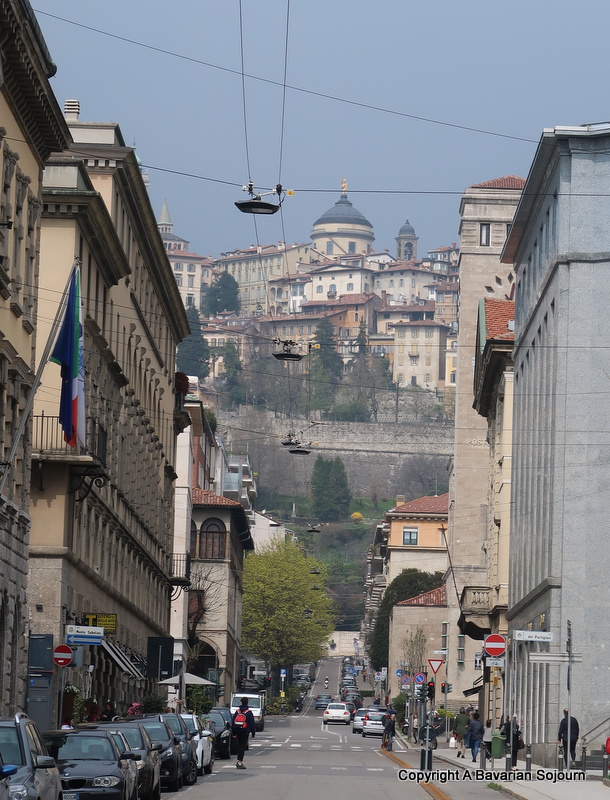 If you are here to see the medieval part of the city (Citta Alta, or Old Town) perched high on top of its hill,  you can’t really miss it, which is generally good for family travellers like us that get lost more often than not.

We set off in the direction of the funicular to take us to the top (I am sure you could walk if you aren’t pushed for time, but the funicular is fun (another toddler placater too!) and only costs a few euros for a return family ticket)… 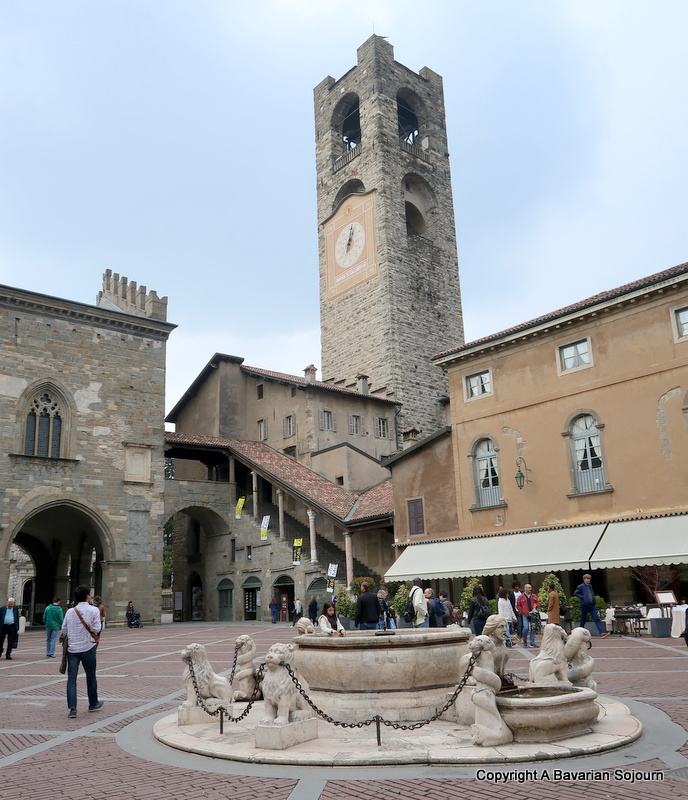 They aren’t joking about the Alta part by the way, they think the first settlement here was back in 49BC… The lower levels of the city (Citta Bassa) are definitely worth exploring too, there’s lovely architecture everywhere (including the very Art Nouveau Post Telegrafi building) and a mass of interesting shops and restaurants.  You will find much of Bergamo as it always has been as it remained generally unscathed during the war. 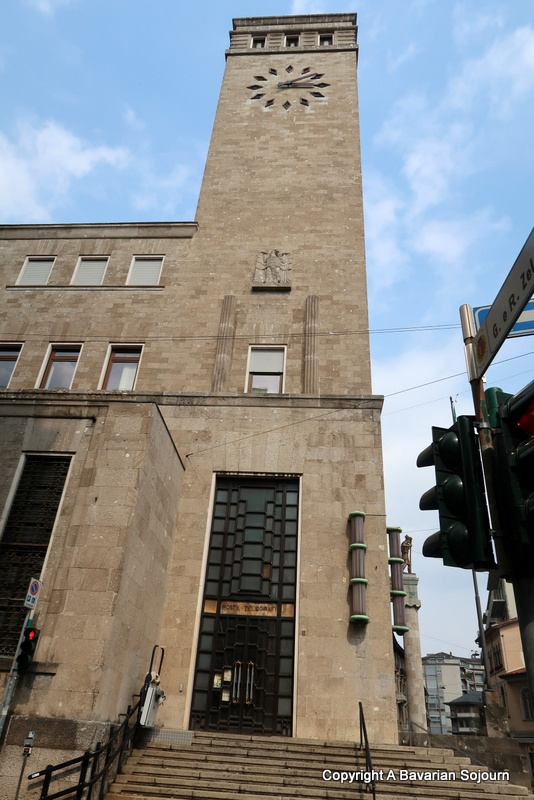 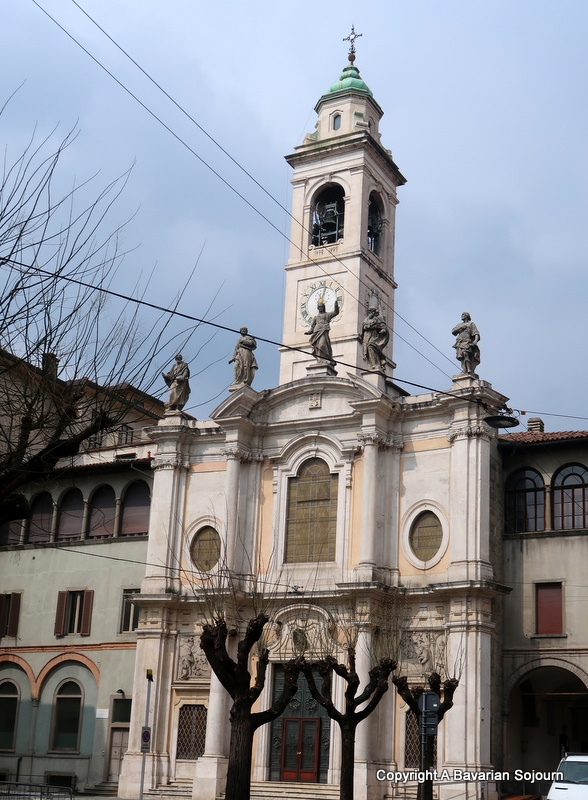 Once you step out of the funicular at the top, you will find yourself amongst the city walls, built by the Venetians who controlled the city for over 350 years (look out the many trademark lions).   On a quiet morning it’s almost like stepping back in time,  before Bergamo’s many visitors begin to turn up!  This is a place renowned for its beauty, so you can hardly blame them for wanting a peep too! 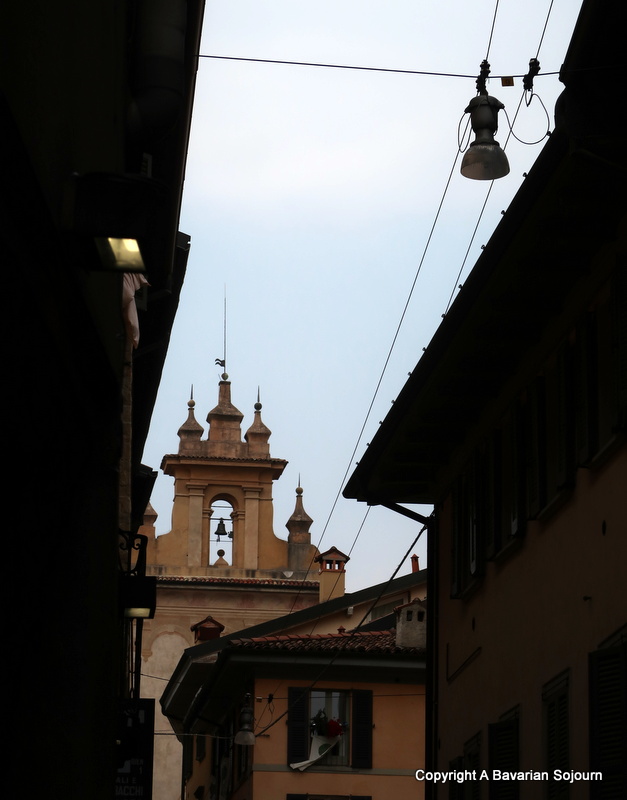 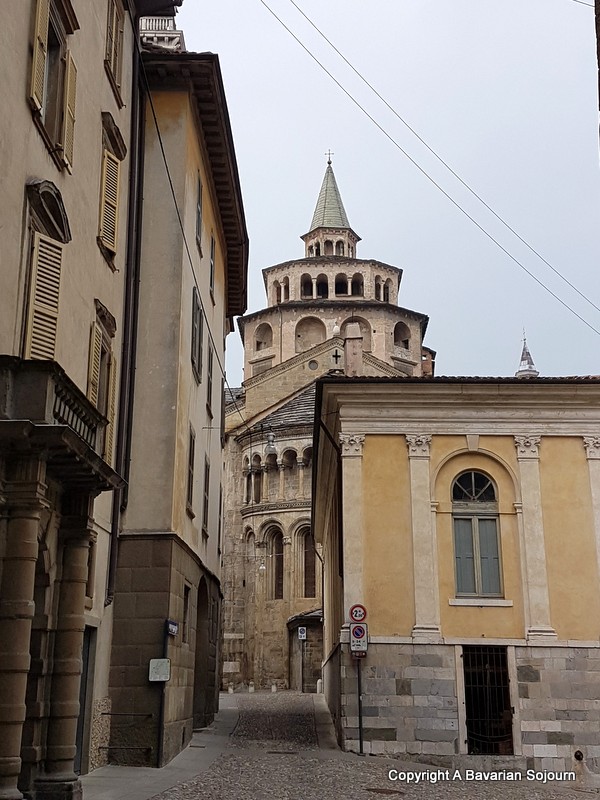 We spent a happy few hours wandering the winding lanes and exploring piazzas (keep an eye out for Via Arena, once the site of a Roman Amphitheatre), playing our usual “where should we eat for lunch” game that I am sure our offspring will remember us for one day.   This typically involves wandering from restaurant to restaurant and vetoing them for one reason or another, until we usually end up back where we started (please tell me this is not just us?)! 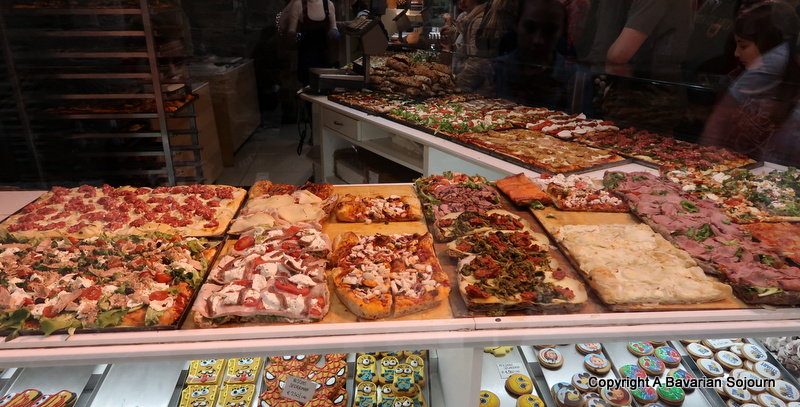 On this particular journey we passed La Marianna the restaurant and pasticceria rumoured to be the birthplace of straciatella flavoured gelato, plus many other wonderful cake shops piled high with yellow Polenta e Osei Cakes that can only be found in Bergamo (which don’t contain any polenta in case you were wondering!)

Along the way we climbed a few staircases (a current toddler obsession), witnessed some holy hoovering in the spectacular Basilica Maria Maggiore, a major attraction in Bergamo, and quite simply as beautiful inside as it is out.  If you don’t like the religious side of things, there’s some incredible art on display too… 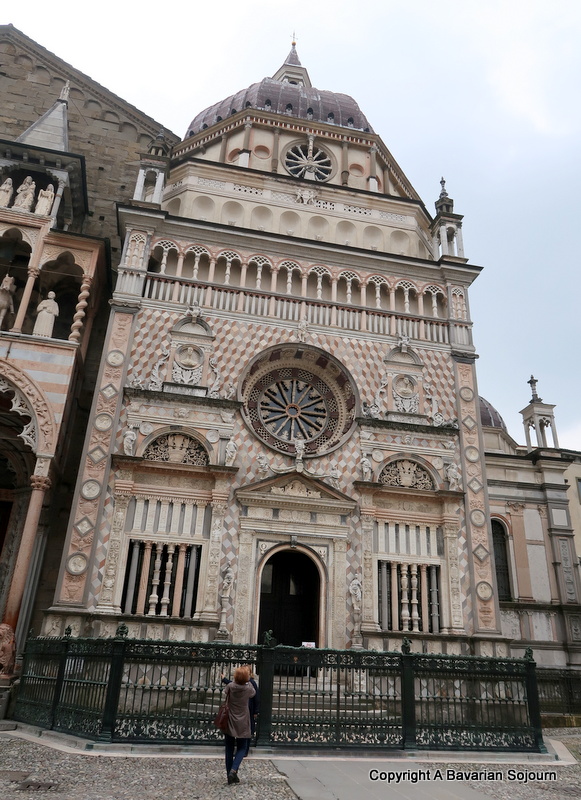 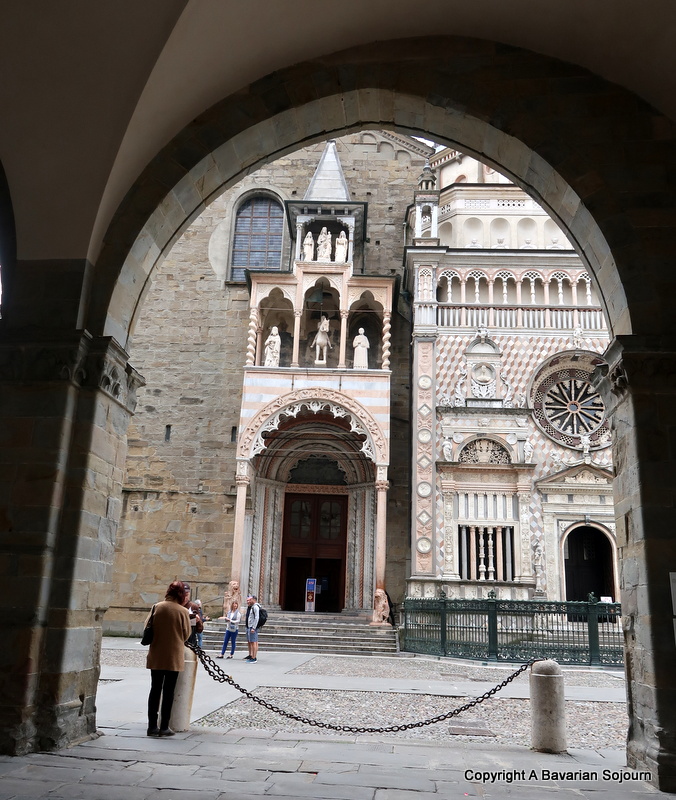 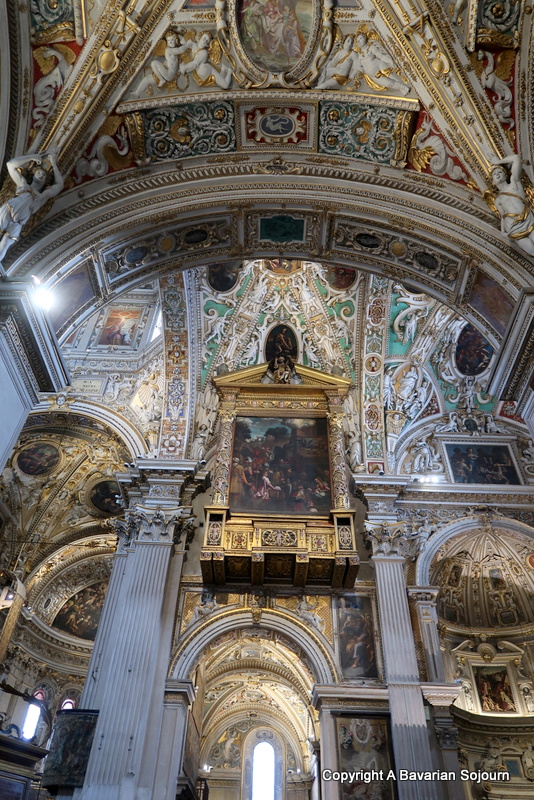 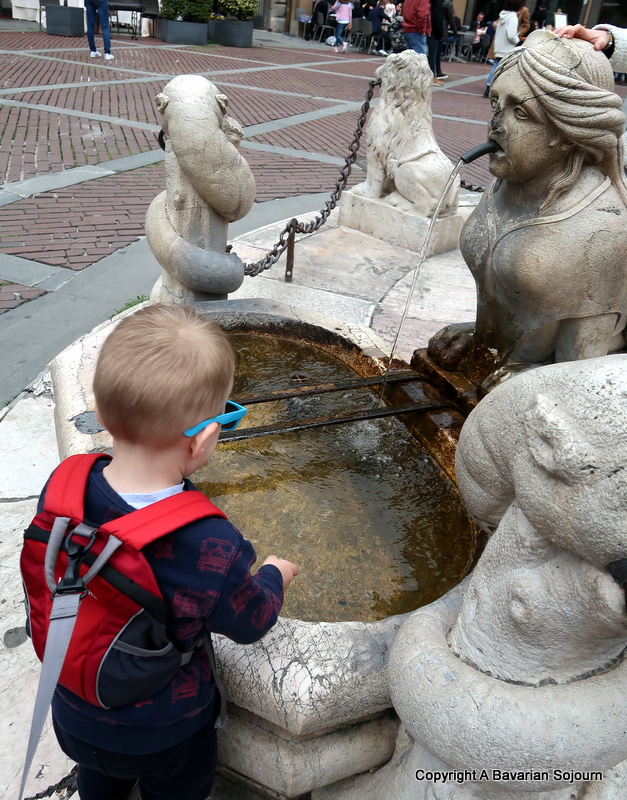 We had time to splash about in an ancient fountain or two in Piazza Vecchia (the heart of the old city) before arriving (as expected!!) back at the very first restaurant we considered – Caffe del Tasso…    I am so glad we came back.

They specialise in the best aperativi, so we had time for one final Aperol Spritz along with various accompanying dishes of sinful goodness, before enjoying a final few plates of home-made pasta and gnocchi before our trip home (their homemade gnocchi with wild mushrooms and cheese sauce is one of the nicest things I had during our entire trip!), and all beneath one of those Venetian Lions. 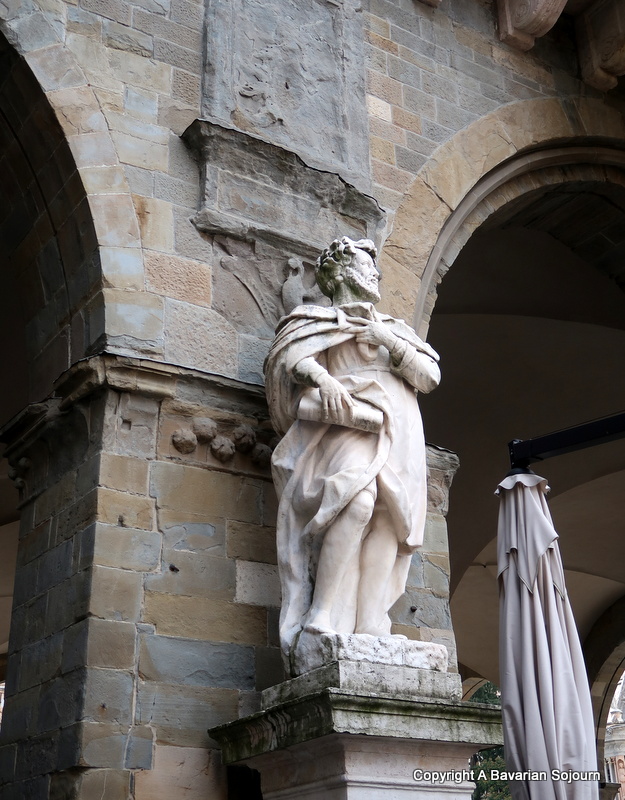 Bergamo was such a lovely surprise.  It was a real highlight in a week full of Milan loveliness, and would definitely be somewhere I would consider as a destination in its own right. 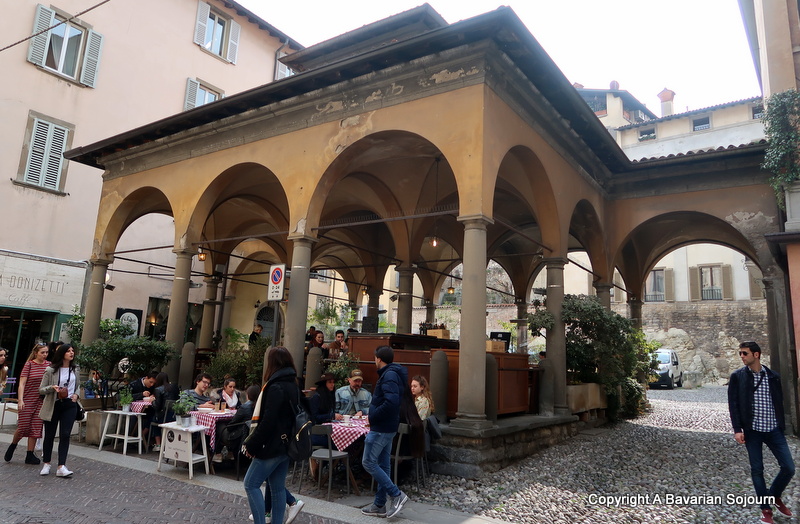 It also helps that it specialises in a lot of my favourite things –  cakes, aperitivi, history, and straciatella, what’s not to like?  Maybe consider stopping off for a day or two when you are next in Milan?  I don’t think you’ll regret it!