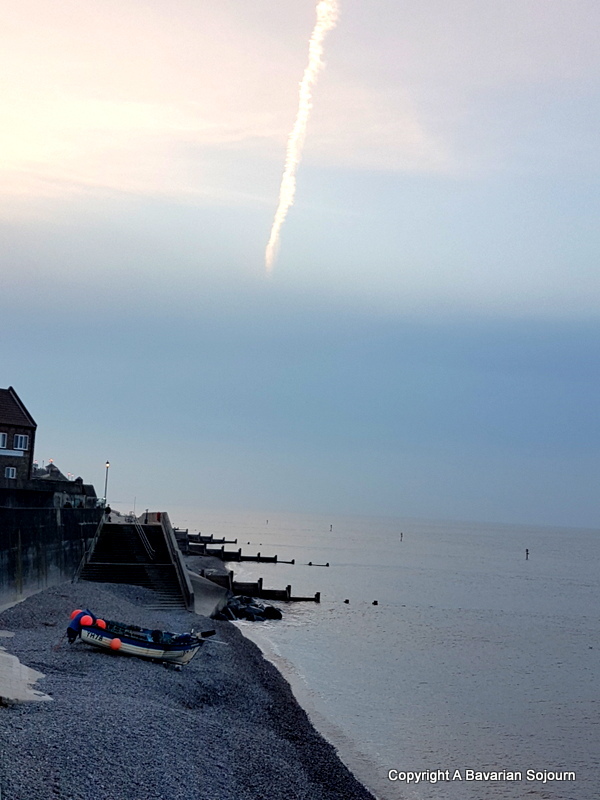 Whilst his older sister chose to go to Asturias recently for her birthday, the Small Boy chose to stay closer to home, to what is equally unexplored territory for him, a trip to the English Seaside.

Having only been once before (last year on a short trip to Bournemouth with Grandad), we decided to head to Norfolk, armed with lots of advice from family who have spent a lot of time in this area, all important crabbing lines, wellies (the only shoe of choice for the birthday boy – his ever organised mother only remembered those, and as we went straight from school it was that or school shoes for the duration!!), and a cobbled together Bannoffee pie (in lieu of birthday cake – his request!).

Our home for the weekend, was Rose Cottage in Sheringham, an original fisherman’s cottage all of a 36 second walk from the beach (we timed it!).  From the pavement it looks positively minuscule, but it proved to be quite tardis like inside, comfortably sleeping the five of us, with separate bedrooms for the small people.  The owners have thought of everything you need for a comfortable stay, from lots of books and dvds to choose from for when typical English seaside weather sets in, to vinegar in the cupboard to complete your fish supper!  You can tell that they really love this place themselves, and it’s not hard to see why.

After a relatively straight forward Friday evening drive from Cambridge, we arrived in time for tea – fish and chips (still a massive novelty for some of us!) and mushy peas of course.  Sadly for his Northern blooded parents, the birthday boy still professed to loving sauerkraut over the peas, but we can train him, I am sure of it!   There are plenty of chippies to choose from on Sheringham High Street, but we had it on our hosts good authority that the place to go to was Straits.  I don’t think you can go far wrong with delicious fish and chips freshly cooked in front of you, little signs telling you which local farmer supplied the potatoes for the day, and not a single environmentally horrible polystyrene take out box in sight.

The children would have happily had fish and chips every day here, but there’s just so much good food to choose from in this part of the world, and we happily dined on fresh crab sandwiches from little shacks at the side of the road, gorgeous handmade sausage rolls (best place for these was Blakeney Deli on the High Street this visit!) and some pretty amazing coffee at various little cafes around the place (we loved The Grey Seal for a really decent coffee!).   Do pop in to the Funky Mackerel for a world famous flapjack and a take out hot chocolate (thanks to sewlovecraft for the tip!), and tuck in whilst sitting on the sea wall  where you can people watch to your heart’s content (I sat for ages watching someone raking through the sand for some sort of shellfish) whilst taking in all that fresh sea air.  I hasten to add the inside of the Funky Mackerel is very lovely too, just not that push-chair friendly! 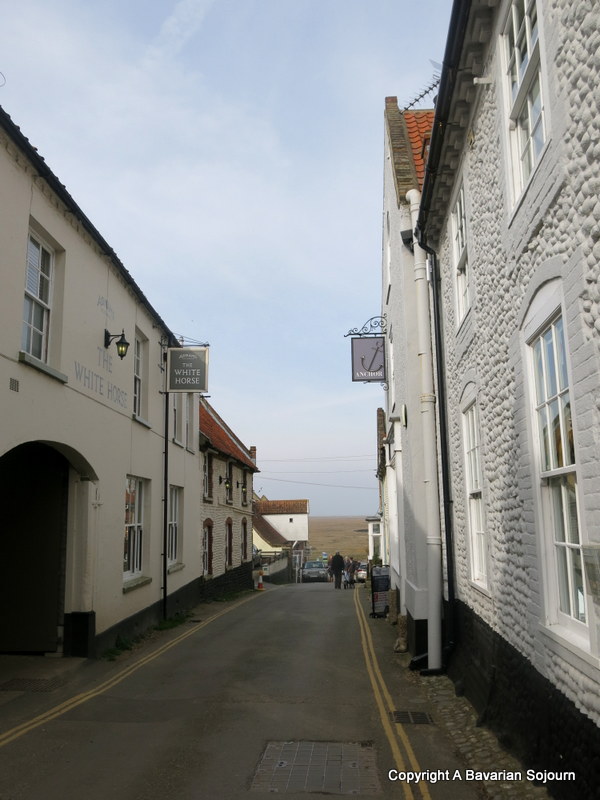 And whilst it might sound like it, we didn’t spend the entire time eating, we managed to pack in a lot of exploring as well!   First stop Saturday was to Blakeney Harbour, where the crab lines were dusted off for a while (until boredom set in.  We had no pickled herring to hand…).  This was followed by a bit of ornithology with a lengthy walk along the salt marshes that form this beautiful nature reserve.   It’s worth bringing a pair of binoculars if you are interested in all things feathered, there are lots of different birds to spot, along with old boats and windmills to inspect on the super stretched out horizons… 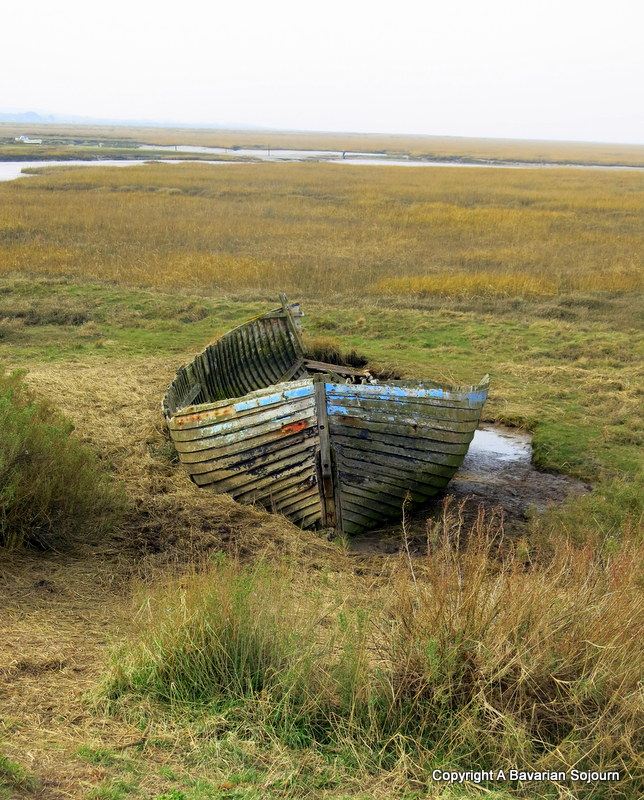 Afterwards, at the request of the now ten year old, we headed straight to nearby Holme for some beach time (this is where Seahenge was discovered apparently, and as the sea retreats over the years who knows what else will be uncovered?!)…    There are plenty of beaches to choose from in this part of Norfolk, but apparently Holme is a bit of a local secret, and it’s not hard to see why…

After a slightly precarious golf course crossing, we climbed up through the sand dunes, and out onto the most beautiful expanse of beach.   Holme is perfect for Small people as it also has large stretches of shells to delve through (many of which were later discovered in my bag for “safe keeping!”) and kept everyone happy for ages, apart from Mr R who was assigned the task of making sure the baby didn’t run straight into the sea on this cool and breezy day.  He is a determined little creature!…

With the exquisite light, this huge stretch of shore reminded me so much of Skagen in Denmark, and was pure heaven to the birthday celebrant!

And after driving back through Enid Blyton villages with names like Stiffkey and Wells Next the Sea (look out for the steam train along the way which connects Holt to Sheringham, we still had a good few hours, and much of Sunday to pack in visits to various amusement arcades for a bit of penny falls action, and a fair bit of ice cream sampling too. Well, that’s what seasides are for isn’t it?

I have to say that one of the nicest parts of being back at home, is being able to show the children how beautiful our own country can be, having focused on another part of the world for so long.   And, if I am perfectly honest, as I am still slightly struggling with unexpected reverse culture shock about many aspects of life back here, this visit was just what the doctor ordered.  Best of all, it’s only a couple of hours drive from Cambridge, so I know we will be here a lot.  Wise choice little one.

A note to the ten year old, as is now custom on such occasions (and expected by one Grandmother in particular)…  I say it every year, but my beautiful (usually mud covered) boy, I cannot believe you are another year older.  Ten.  It seems like minutes ago that you were perched on top of a step ladder in our Teddington house, whilst the removal men packed up our life around us to move to Copenhagen.  You were two and a bit, and full of mischief and wonder at the world, (and the inbuilt ability to wind your sister up as naturally as it is to breathe for you!). And here we are, seven and a bit years, two countries, three schools, and one new sibling later, and you are still full of wonder (and the natural ability to wind your sister up – some things never change!).   You have taken nearly everything in your stride with the move (although understandably you are still quite heartbroken about leaving behind friends you spent over half your life with in Bavaria), but you’ve still embraced your new school, and England on the whole given it’s not that familiar to you really, and how you’ve coped with it all just illustrates to me how strong and loyal you are (and how you will now always support an English football team, AND FC Bayern apparently!).  But sometimes it’s OK not to be strong sweetheart, always remember that (something I think all boys should remember actually!). x