Be careful what you wish for, as that old saying goes –  it might well come true…

And this time, come true it did –  in the form of the traditionally festive (although excellent all year around I find!) Chocolate Orange!     Between us all, we amassed the grand total of nine!    A little like an episode of Star Trek I strangely recall watching as a child (my Dad made us watch it!) these small round things just kept on multiplying.

Then (as is normally the case when one of your New Year’s resolution is to try and lose a few pounds) they seemed to speak to me from the depths of the newly assigned Christmas chocolate “house” (currently occupying half the tea cupboard!), just waiting until I walked past, when they would whisper “eat me!” (OK I might have imagined that last bit!)!    And something had to be done.   Something also had to be done about a slight hankering I had for a certain UK shop’s Tarte au Chocolat that my sister informed me that she had had a slice of for breakfast one morning (it runs in the family it seems), when the answer suddenly came to me.   I would kill two birds with one stone, and make my own chocolate tart, but with chocolate oranges instead, and with orange pastry no less!! 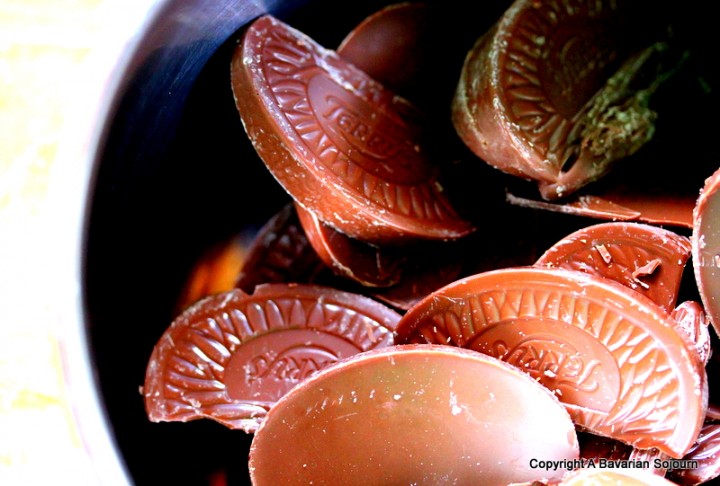 And so, may I present to you, a slightly decadent (and by no means slimming!) Tarte au Chocolat Orange?… I promise it’s good (and big enough that you won’t actually mind sharing -with someone really special!)…

It now (or rather, what’s left of it!)  lies safely ensconced in the depths of the freezer.  I have no idea whether this will actually work or not (it should freeze though surely?), I just know that the walls are thicker in there, and I can’t hear it calling so much! 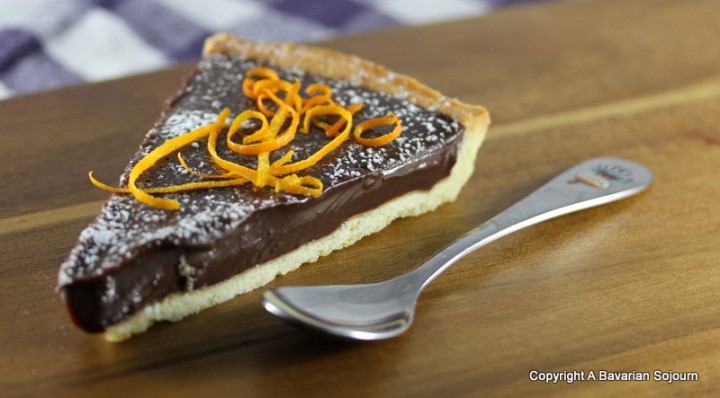 I was going to put this in my new Expat Essentials category, but apparently it’s not essential.  I don’t agree.   And no, it’s not Terry’s, it’s mine (only English people will get that reference!)…

Make the pastry by sieving the flour and icing sugar together, before rubbing in the butter. Add the zest of the orange, and the egg, and a splash of milk to bring it together. Wrap in cling-film and put in the fridge for at least an hour.

Preheat the oven to 200C. Line your tin or tart dish with baking paper (this made enough pastry for a large 32cm tarte and a little one as a tester for the chef!), bake blind for 15 minutes, before removing the baking beans and baking for a further 5 minutes (depending on the thickness of your pastry, you might need a couple of minutes more here!)…

Leave to cool slightly and get on with the filling. Put the chocolate, cream, butter and sugar together in a pan over a medium heat, and whisk together until melted and glossy. Pour into the pastry cases, and leave to set in the fridge for a couple of hours.