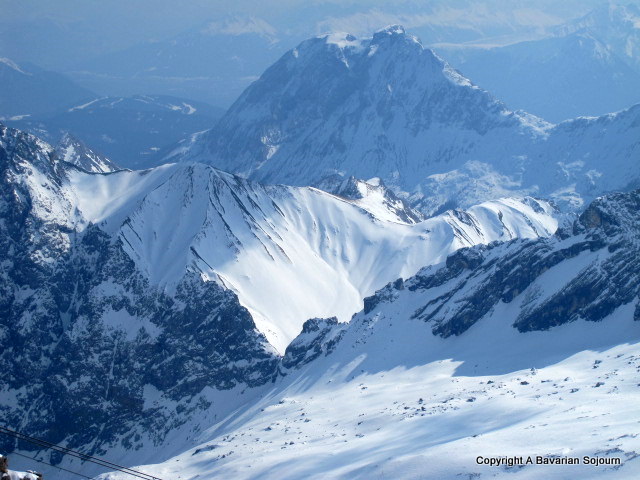 It was Mother’s Day on Sunday (for us English Mum’s anyway), but I can’t help feeling I lucked out ever so slightly this year, as it was also my husband’s birthday.   Normally we would do something quiet and relaxing like going for a nice walk, followed by a leisurely lunch somewhere perhaps… But Birthdays trump Mother’s Days every time, and the birthday boy got to choose what we were doing.  Quite typically we ended up at the top of the Zugspitze, which at almost 3,000 feet is the highest mountain in Germany.   He is obsessed bless him. 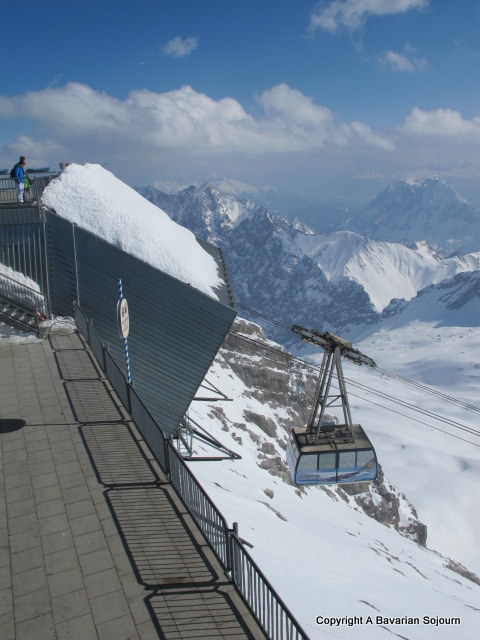 At least the cable-car was a bit more substantial here, a vast improvement on the tiny metal bubble that took us up Wahlberg a few weeks ago.  And it had someone “driving it”, which somehow helped me cope with the idea of being inside a tin box whilst dangling from an inadequate looking steel thread, and all so perilously high off the ground…

The gorgeous views of the surrounding mountain-range and the still frozen lake at the bottom was the reward on the ascent, and I kept mumbling a mantra to myself which went something along the lines of “you’ll be glad you did it one day” but with swear words.   Then we got to the top.   I have honestly had several recurring nightmares about the backward glance I made the mistake of taking as I stepped out of the cable car…  Dear Lord, it’s high up! 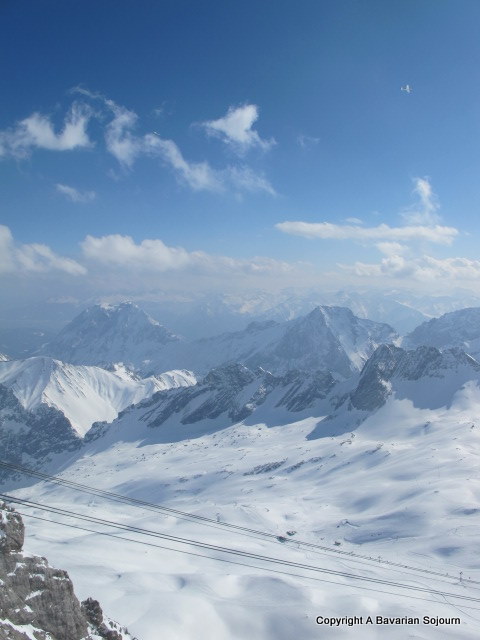 But how beautiful it is, and so peaceful too…   The only real movement (apart from my wobbly legs) was from the alpine choughs that surf the wind that moulds the snow into weird and wonderful shapes… 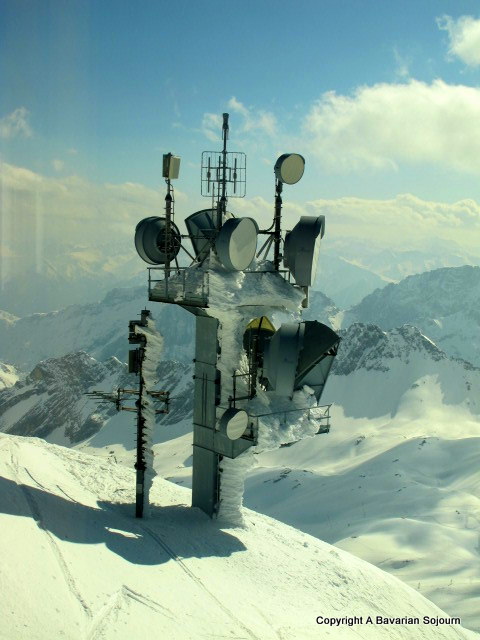 At the summit you can also take a little walkway which actually crosses into Austria, so we spent a couple of minutes jumping back and forth from one country to the other, and then I annoyed my lot by staying outside for far too long to take far too many pictures.

When the cold did get a bit much, we thawed out over hot chocolates before inspecting a few of the exhibits on display from mountain expeditions of the past.   The picture below does not fully illustrate just how enormous this shoe is.   In some overly crowded cities across the world, there are possibly smaller cars!  Can you imagine actually wearing these at all, let alone mountain climbing in them? 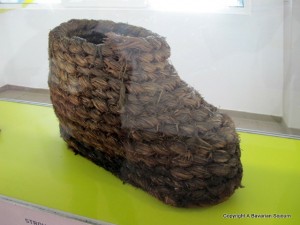 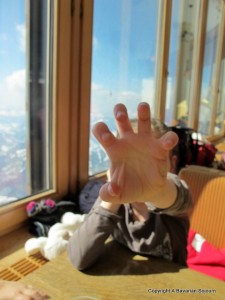 The altitude was obviously beginning to affect certain members of our party, and before permanent craziness took hold, we took the cable car back down with a large group of Chinese tourists.  They were a very jovial bunch, and the cable car was to them apparently the funniest thing in the world, ever.   The slightest extra movement resulted in hysterical laughter, and lots of oohs and aaahs that rivalled the rowdiest British Bonfire night I have ever been to – it took my mind off my surroundings in any event!

Then, to reward bravery and to recover nerves (and to include something of the traditional about the day), we did have a lovely Mountainous Mother’s Day/Birthday lunch in picturesque Garmisch.  It was warm enough to sit outside, and we had a great view of the mountain we had just “scaled” whilst I appreciated being back at a more usual altitude!     I am completely glad we did it, it was an amazing experience and even though I am looking forward to a more typical Mother’s Day next year, I really didn’t mind sharing the day with my lovely other half!