It is with a heavy heart (and much heavier steering – although that might be my imagination) that I  face up to the year already having progressed so much that it is time for Cecilia (my trusty auto) to get her winter clobber back on (albeit in the form of big fat snow coping tyres).      Yes.  I am ignoring the fact that we are currently experiencing a bit of an Indian Summer, but Mother Nature can’t fool me, I know that when she’s stopped messing around it’s all downhill from now on (I haven’t quite forgiven her for the fact that on the very day I got them changed back to “summer” tyres it snowed for the first time in ages either – in April!!)…

This combined with the fact that the clocks go back on Sunday and I am determined to look on the bright side.  I shall console myself with the fact that along with future freezing temperatures, pitch black mornings and nights that draw in seemingly before the days have really begun – it is also almost  time for unparalleled cosiness, of wood fires blazing in hefty Bavarian Kachelofens, and of candlelit evenings (an addiction from our Scandinavian days!).  A time for hot soups and winter boots, down coats and big fat stodgy puddings – perhaps the best winter warmers of them all!  And this one is just perfect for that – true central heating for the soul!

Based on an adapted Jamie Oliver recipe that I have been using for years, but with the addition of much more cinnamon, and this time with a bar of 99% Cocoa Bitter Chocolate for the sauce (and that I had been searching for a suitable use for anyhow it having been denounced as inedible by a much-loved guest recently diagnosed with diabetes (and which was probably a slightly horrible gift anyway for someone who had definitely struggled in the past with a Haribo addiction!!)…).

Heat the oven to 180DegC.    Cover the dates with boiling water, add the bicarb and leave for two minutes before draining then blitzing to a puree with a hand-held blender.

Cream together the butter and sugar.  Add the eggs, flour, cinnamon and yoghurt before mixing in the date puree, and combining well.   Pour into a buttered dish, and bake for 35-40 minutes (I suggest you check after 30 minutes though, just in case!).

Whilst the pudding is baking, over a low heat melt together all the sauce ingredients until combined and thickened.  I like to test the sauce constantly at this stage just to check that it’s to my liking (!!).

Leave the pudding to cool, serve with a generous spoonful of hot sauce and a sinful amount of double cream…

And another good thing about the start of the onset of winter?    Seasonal sunrises like this.   Well you do need some kind of reward for getting up at such ungodly hours at this time of year don’t you!? 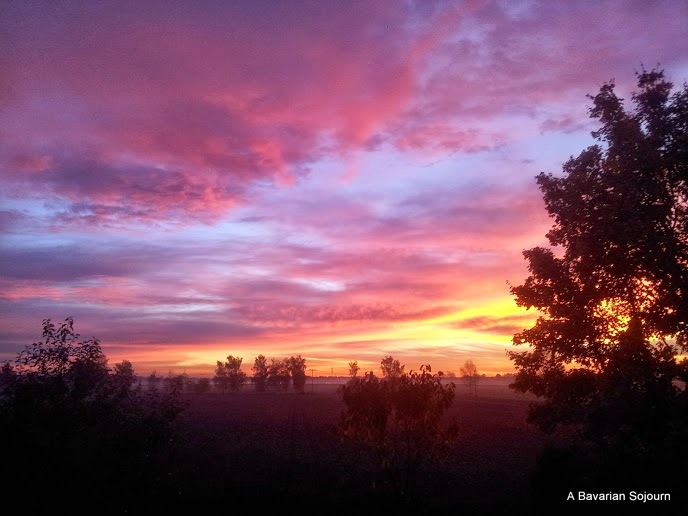