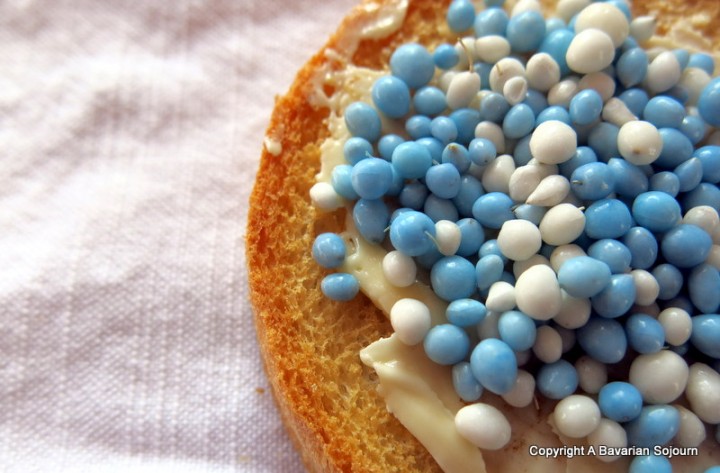 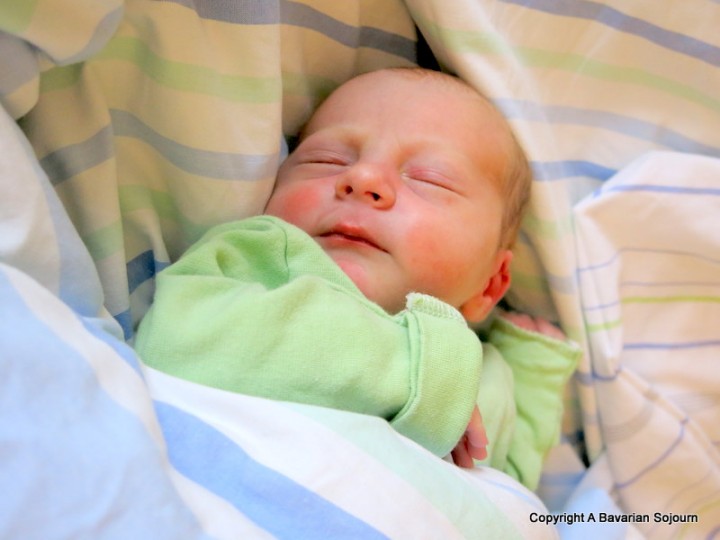 At a week overdue and with placenta action being monitored every two days by over-anxious German doctors, my waters finally broke at home.   We set out into an incredibly dark and rainy Bavarian night for the short drive to our local hospital in preparation for the long night ahead – whereupon (quite typically) everything stopped.

Whilst Mr R tried to grab a couple of hours sleep, despite the moaning mothers in the adjacent rooms (not great for anxiety levels generally when you are about to give birth yourself!), I was wide awake full of adrenalin and nerves at what was to come.  Hearing the arrival of someone else’s newborn at 2am was quite lovely though,  and had us both weeping – though to be honest, at that stage it didn’t take much to set me off – by then I was regularly crying at adverts.

The following morning things were beginning to happen pretty fast, whereupon my over ambitious plans for an all natural birth went out of the window – I am not as hardcore as my free-birthing German counterparts it appears (they don’t even do gas and air typically here!).

And so, to the soundtrack of a new batch of lowing mothers in the surrounding rooms (sort the sound-proofing out people!) and a tarmac destroying party of builders directly outside my labour room window, the baby decided he didn’t want to hang around any longer and made a swift and pretty dramatic entrance into the world.  He was born screaming and healthy and weighing in at a pretty respectable 8lb.10 oz.

Thankfully being a foreigner and all, I had thought to employ a lovely Doula (Carolyn of Butterfly Beginnings) to help me with the birth, the language, and with any cultural differences – and who supported us throughout the next part of the journey too.  Sadly, this was not quite as straight forward as it could have been.

Pretty much as soon as the baby had arrived, things started to look a little fuzzy and prickly around the edges vision wise, and I became aware that all was not well.   Beginning to panic, I soon became the star of my very own trolley dash to theatre for what should have been a ten minute procedure for a bloody awkward placenta who liked it where it was thank you very much.  I was by this point hallucinating and trying to persuade the bald eagle from The Muppets that I really didn’t actually need a general anaesthetic.   I actually did.

Two hours and a severe loss of blood later, I woke up in intensive care with a team standing over me, together with a very shaken and anxious looking Mr R (thankfully Carolyn was able to stay with Mr R and help with the baby whilst I was out for the count!).    I cannot fault the care that I received at the hands of the doctors, who were progressive enough to let the Baby be wheeled to me throughout the time I was in ICU so that we could bond and attempt to feed.  Thankfully my time there was pretty short-lived, and around 18 hours later we were allowed to leave for the noisy environs of the baby ward, where we spent the spent the next few days holed up in a fabulous family room.  Here I received a vampire’s dream of blood, and some pretty coloured bottles of iron therapy to get my blood regenerating again, plus lots of hearty Bavarian food to build my strength back up.

I was visited throughout by the doctors who attended me in labour and in intensive care, and the various midwives who had helped us along the way who were all so sweet, kind and caring.  I will never forget the nurse who bought me chamomile tea whilst I was intensive care throughout the night, and helped me try to feed the baby whilst attached wires, monitors and all other sorts of paraphernalia.  Proving that kindness transcends language barriers (although  a few days in a Bavarian hospital will do wonders for your language skills if you want to go to drastic measures!).    Just thinking about how they would pop in to say hello, hold my hand, reassure me (and coo over the baby) still has me welling up. Their kindness meant a lot at a time I felt incredibly vulnerable and very far from home.

By day 5 we were allowed back home as long as I promised to rest, which to all intents and purposes I have.   Baby has spent the time mastering the art of thumb-sucking whilst being periodically smothered in kisses by Small Girl (Small Boy is still coming around to the idea!).  Thankfully I can feel my energy returning (which is wonderful as it had me worried I can tell you), and things are slowly slowly getting back to normal.

Day 6 and I almost have the hang of this. Will be back to normal picture action soon enough… #newborn #expatbaby #baby

I can honestly say that I would go through it all again in a heartbeat for our beautiful Bavarian boy, or should that be Bua?  He is gorgeous and we are incredibly lucky.   His big brother and sister (mostly) adore him, and he’s settling in well to his Small Person No. 3 status…

I suppose you could say that a little bit of me is truly Bavarian now having received plenty of Bayerisch blood.  It’s ironic that once you have received blood, you can never actually donate it again, but how I wish I could.     Blood stocks run very low over winter months, so if you fancy saving a life with relatively little mess and without too much hassle, please, please donate when you can.

Normal blogging action will resume in the next couple of days.   Promise.  x