Weekends without children rarely happen in our house, except for birthdays and anniversaries when we often manage to leave Super Gran in charge and head off somewhere (thanks Mum!)…

Given the fact that Mr R was flying in from the US last Friday afternoon, I hadn’t wanted to book anywhere too far away just in case he missed his flight and I ended up having to go on my own.   Having said that though, Grove Lodge in Bath is one of those places I would actually be quite happy to be on my own.   I would just spend the weekend eating their amazing breakfasts (you probably don’t need to eat anything else for the rest of the day!), take lengthy baths in the free-standing tub, and watch TV from the comfort of the biggest squishiest bed.    From time to time I would probably look out at the rolling hills that surround Bath, and think to myself “sod it, I am not going anywhere” – except that Mr R did make his flight, and I am of course really glad we ventured into the city more than once during our stay. 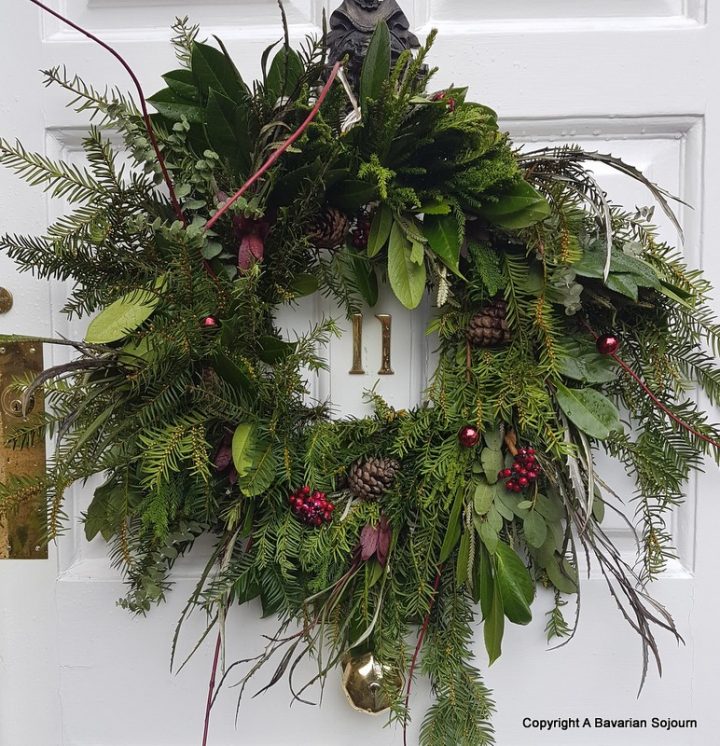 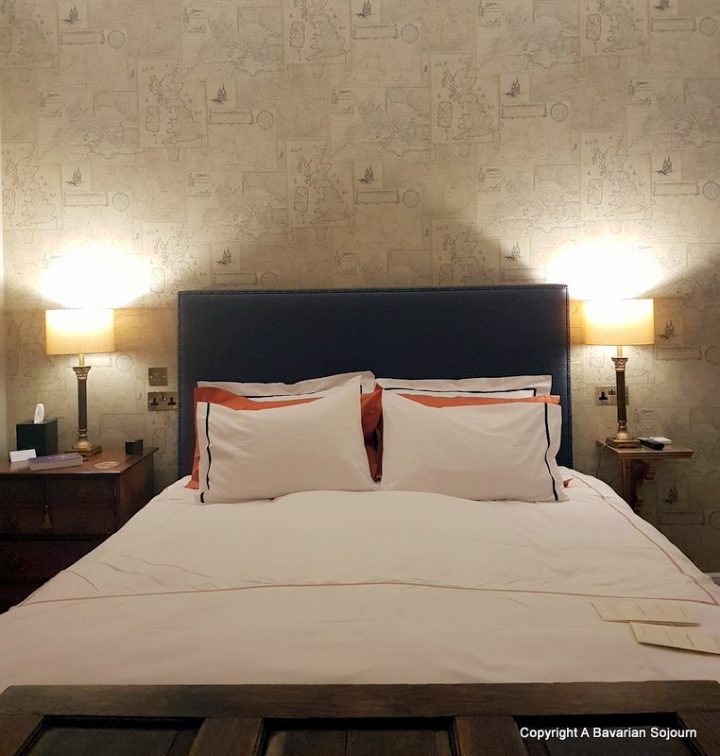 Although Grove Lodge is a shortish walk out of town (there is a bus stop directly outside however!), you get the best of both worlds – a good location on the periphery (don’t let London Road put you off by the way, you can’t hear it at all from inside) and the most beautiful accommodation (there are three suites – we had the top floor Roman suite consisting of a huge bedroom, big bathroom and a separate private drawing-room where breakfast was served each morning).   Our hosts Giovanni and Mary have owned Grove Lodge for the past 3 years, but I imagine they have plenty of previous hospitality experience given that they are perfect hosts.  They are always on hand with recommendations or advice, and the rooms are exquisite!   The little touches such as the welcome glass of prosecco on arrival, and the homemade treats in the rooms added to the whole experience (and my waistline). 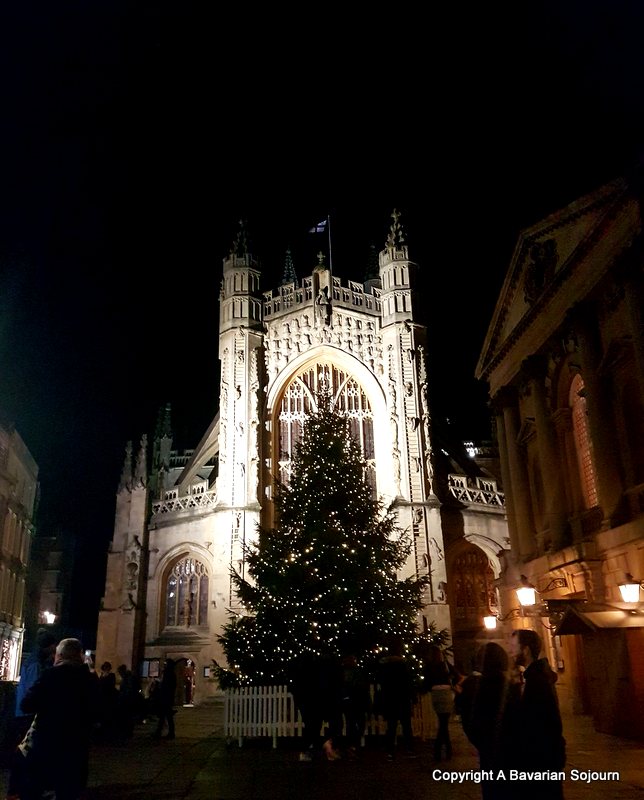 I have struggled with the whole repatriation thing at times if truth be told, but one upside of this is my seemingly new ability to see certain aspects of my own country in a whole new light.  I am no stranger to Bath, but I hadn’t ever really appreciated just how beautiful it is before (unsurprisingly it’s a UNESCO World Heritage Centre given its Roman heritage and gorgeous Georgian architecture!).   Bath at any time of year is special, but Bath at Christmas?  It’s worth visiting even without heading to the Christmas Markets (which we did, but they are quite different to what I am used to, so they make me a little “homesick”!). 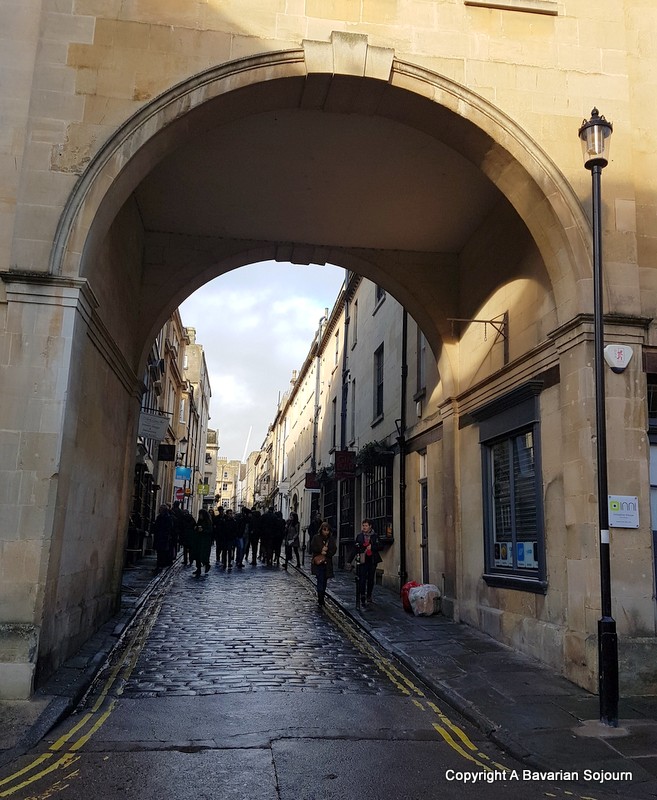 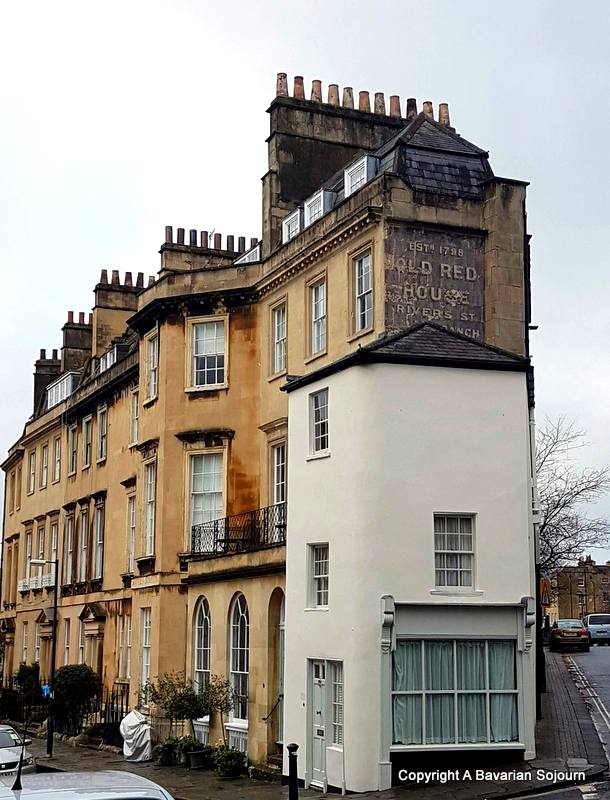 We had booked The Scallop Shell for the Friday night as we were arriving late, and it looked like a good casual option (it’s not just fish and chips, there’s a huge array of seafood on the menu).   I tend to be pretty fussy about mussels, but these were the best I have had (outside Belgium!), and the fish and chips were excellent.  The homemade mushy peas were also the kind you want a friend who has never had them before to try, so they have absolutely no reason to say yuk!  A word of warning – if you book a table beyond 8.30, the kitchen closes at 9.30 on the dot so make your minds up quickly (there’s also a Scallop Shell street food van you might spot around and about Bath!).

A leisurely stroll back led us through lamp lit streets that looked like something out of a Charles Dickens novel, and into the tiny welcoming King William for a night-cap.    Nowadays it’s more famous for its food, but it’s there’s a huge array of wine and ales, plus the building is gorgeous – it’s been a pub for over 150 years! 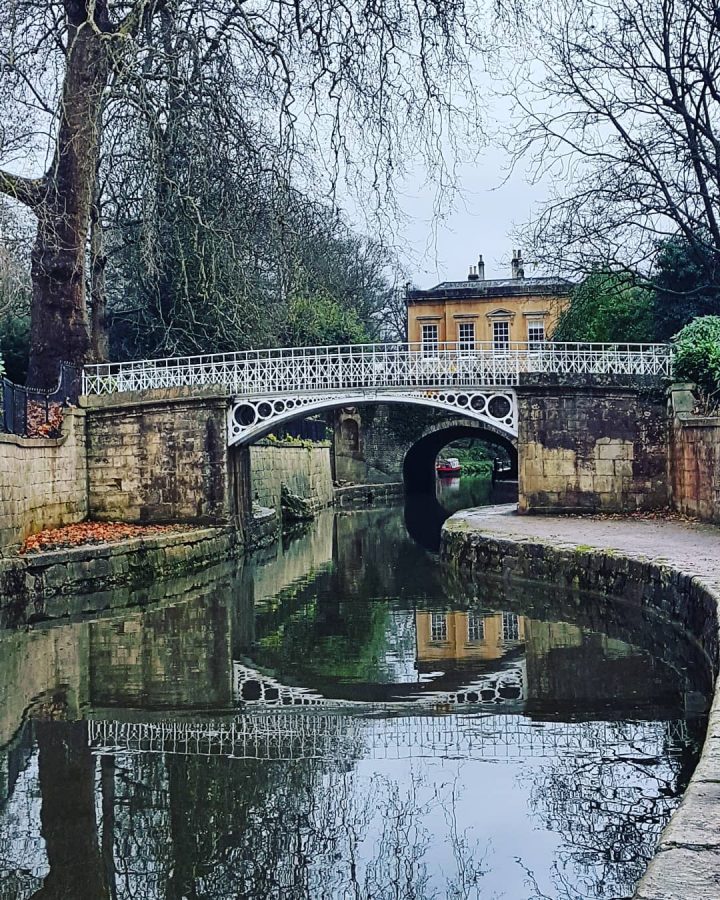 Of course the following morning one of us had forgotten to turn our alarm off so we might as well have had the kids with us, but because of that we were at least up and about reasonably early.  On Mary’s recommendation we walked into town along the canal tow path, past the boats (where I once experienced the most chaotic hen do on a barge ever.  I can say that because I helped organise it – I still have nightmares about locks!) which eventually took us out in the midst of Sydney Gardens (the only remaining 18th century pleasure gardens left in the country), and past the small but perfectly formed Holburne Museum in all of its Christmas glory, over Pulteney Bridge and in to the city centre.

Another thing I like about being back in the UK is the fact that we have a lot of good expat friends here.  The last time I saw my lovely friend Carolyne (you should really make her gluhwein recipe by the way!!) and her husband in Munich, I was doing a pretty good Violet Beauregarde in giant blueberry form impression (just without the purple!) as I literally had days to go before the Toddler’s arrival.  And as this time we visited them in “their” city (and I was able to walk without waddling) they did us a great guided tour! First stop the artisan market in Queen Square for a brilliant Bloody Mary and Oyster brunch (like we needed one, but it was so good!) and a decent catch up. 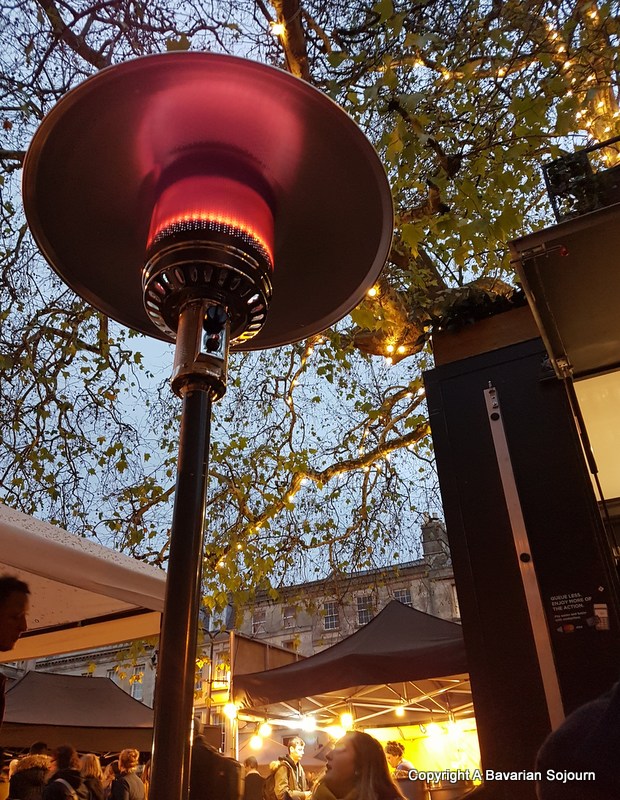 After a really lovely day spent together (you truly find your own kind amongst fellow expats, they are the often the only people who can possibly understand the emotions and experiences you have been through – I think that’s why you can become firm friends so quickly), Mr R and I had time for a quick inspection of Toppers which is a must see for book lovers visiting Bath (we actually bumped into another friend here, but that’s another story!) before wandering to Henry’s for dinner.

I had looked at booking various Bath institutions for dinner, but kept returning to the idea of this relative newcomer, mostly because I kept finding pictures of its famous chocolate tart.    At first I wasn’t sure we would get a table, but they called me after a cancellation, and we definitely lucked in!

Henry’s is small but perfectly formed, and the staff are super friendly.  The dishes take their inspiration from across the world, but are made with seasonal high quality local produce.  The food is delicious.

One thing that really endeared the place to me (apart from the excellent food) was the way the staff dealt with a rather unpleasant and drunk prospective customer (who had wandered in after a day at the markets by the looks of things!).  Whilst I might have searched for the closest wooden spoon, they dealt with the situation calmly, quietly, and with a kindness that quite frankly I am not sure he deserved.   Henry himself came around afterwards to apologise, but there was no need, it was just one of those weird one-off situations (I can’t imagine this kind of thing happens here very often!!).     It did leave me wanting to give the poor boy who dealt with the whole thing a hug afterwards, but it didn’t effect our evening.

We went on to enjoy a four course Chef’s menu with a wine pairing, enjoying a gin cured trout gravlax with yuzu and sesame, a pork belly raviolo in a Thai broth, pheasant with lentils and of course the famous chocolate tart with a Szechuan custard, which completely lived up to its reputation!

Later, as we walked home, we laughed at the fact that we can never just go on a “normal” holiday, have a “normal” day out, or even go for a “normal” meal without something or other happening – a recurring theme throughout our lives together!   We reflected on the day we got married underneath a huge South African Jacaranda tree, and how lucky we’ve been during the past fifteen years.

I know I am incredibly lucky to have married the loveliest most patient man, who hasn’t once complained at me taking 50 billion photographs everywhere we go.  I think on his part he was mostly grateful that I had remembered to turn off the alarm for the next morning!   Here’s to the next fifteen years and beyond and all that!

Grove Lodge looked after the pair of us very well, and although we booked it relatively last-minute and visited Bath at a super busy time of year, it just means that we will have to go back (possibly with the children!) to explore properly, maybe visit the spa, visit the Roman Baths again (if you would like to read more about that, very handily HelloEatExplore has just published a post on it!), and also pop in to Sally Lunns… 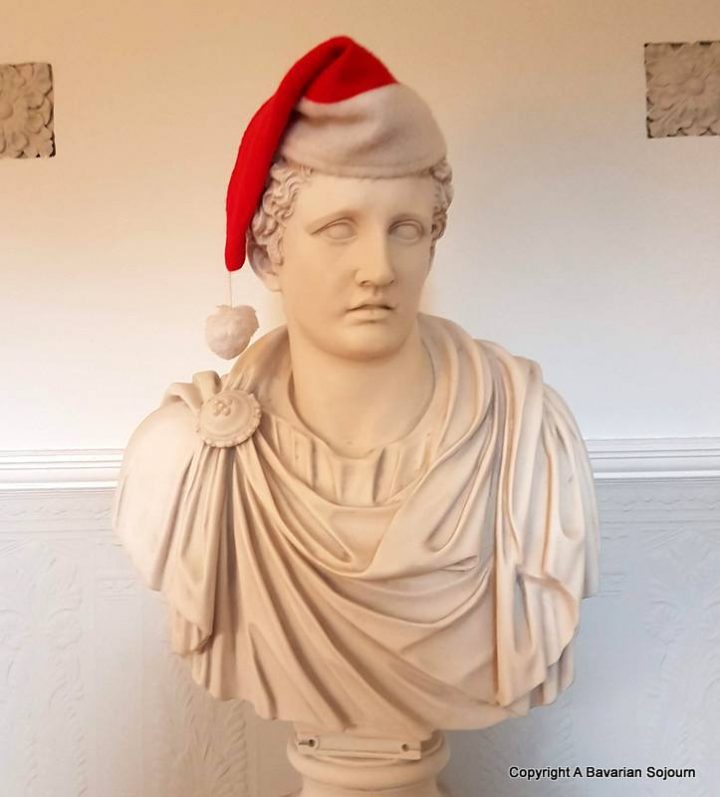 Bath, it was so nice to see you again, thanks for the super relaxing weekend.