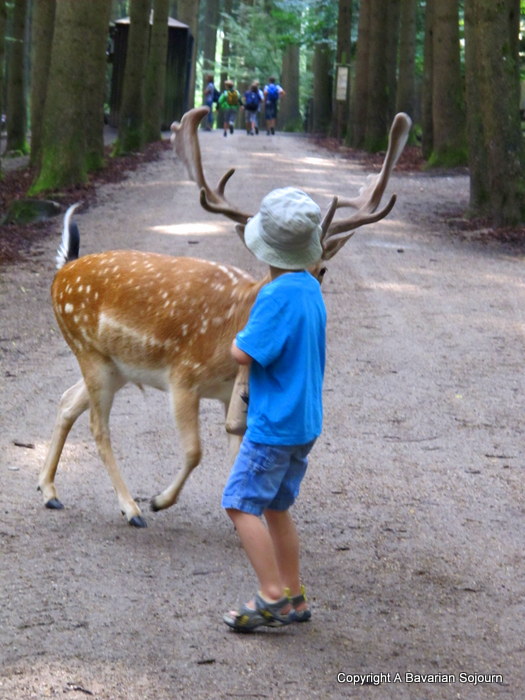 It rhymes with “going” in case you need to know, and things like that bother you.   They do me, especially when I am going to look stupid saying something incorrectly in someone else’s country, which is usually the norm…

We have visited Poing quite a few times over the summer holidays, both Small People adore it.  It also has what could quite easily be the biggest playground I have ever seen.  Given half the chance I think they would bring a tent and camp here if they could, except they wouldn’t need to because there are wigwams.

And I like it too, for reasons like this…. I can take close up photographs of beautiful creatures we spent months searching for in our last location. People of Denmark, stop looking now. All the “Baby Storks” have moved here… I have found them (I am also imagining lots of new babies safely delivered in the area?)! 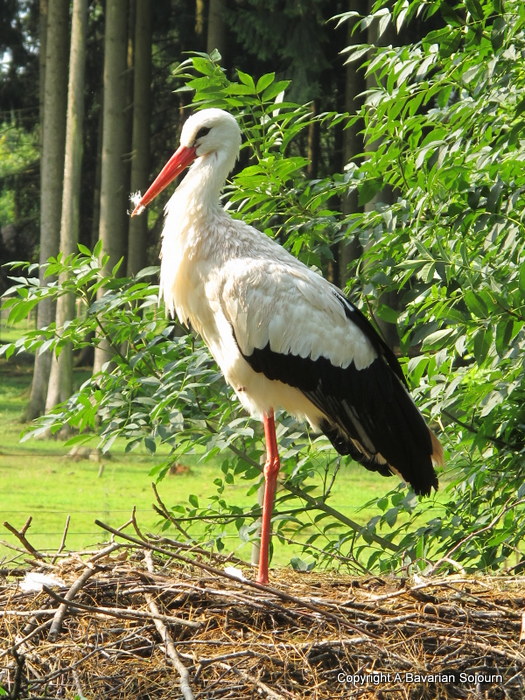 Don’t forget to buy animal food at the ticket desk, because as soon as you enter the forest there will be new and hungry friends waiting for you. They are incredibly gentle creatures though, even those with the biggest antlers aren’t that intimidating. In fact they are only a bit mean to each other, and the poor girls didn’t really get a look in thanks to the greedy boys. My little feminist was having none of it though, and spent ages actively seeking the girls out just in case they were starving… 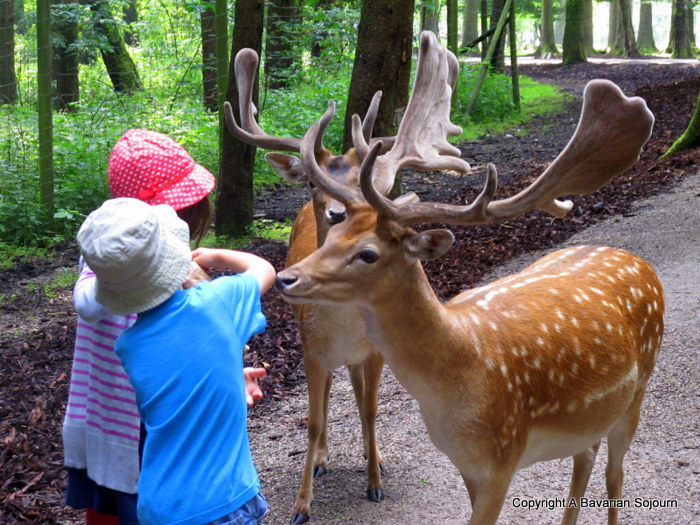 I found the Beavers featured in a recent Silent Sunday here too (although we have been back since then), but now I think they might just be pretend Beavers as they don’t have the right tail. Anyone know exactly what they are?

There are brown bears too. Although the first time we came we didn’t spot a single one, which is possibly because their enclosure is sooo huge. But that’s how animal enclosures should be isn’t it?  But on this visit they put on what could have been Bear Olympics, with some synchronised swimming, massive rear shaking, and a growling competition. There are no wild bears in Bavaria today though which is sad, these bears are actually Swedish. 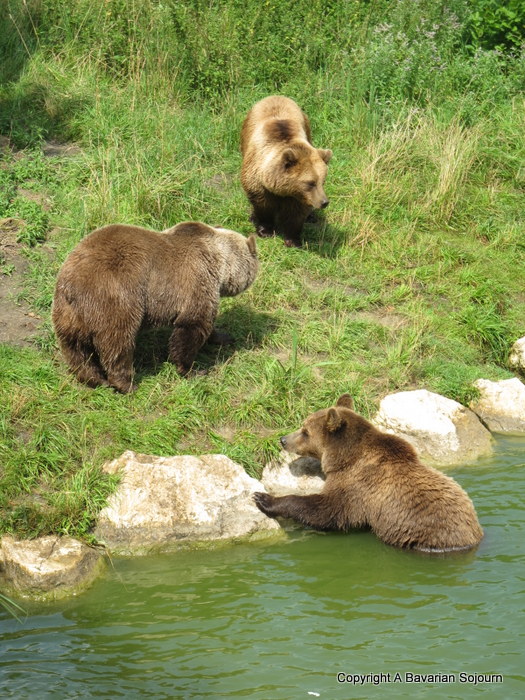 The wild bird display is great too, even if I could only understand one word the presenter repeatedly said. What’s not to like about huge snowy owls literally skimming the tops of your heads (especially if you are Seven Years old and Harry Potter is the best thing ever!)?  I managed to get a close up of one gorgeous bird, he did squawk in protest, but I think it adds to the picture! 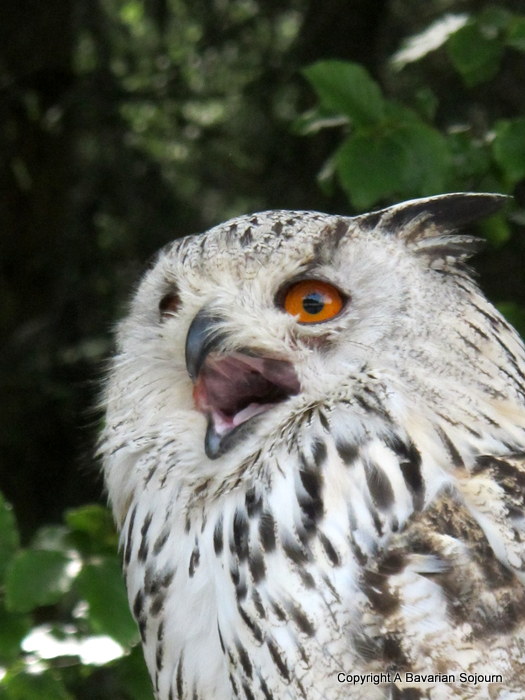 Time for a visit to the ginorma-playground next!   All was going well, until Small Boy insisted he was big enough to go on this… 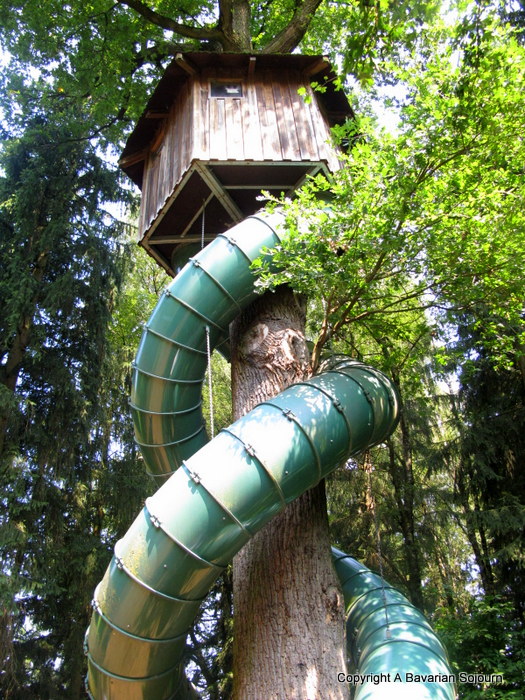 Which will hence forth be known as the “Big Green Slide of Doom”. I had my fears about it, as a closer inspection revealed a ladder going up the inside of the slide. But his sister reassured me that she was definitely big enough, and she would definitely look after him. And so I waited for them at the bottom. And I waited. And waited. It then became obvious that the same children were reappearing again and again – without any sight of mine. After getting slightly worried, I shouted up “The Green Slide of Doom” to find out what on earth was going on. And then, as if by magic, they both appeared… The Seven Year clutching a hysterical Five Year Old around the middle. It turns out that the rungs were a little too large, and bigger children were clambering over the top of him, which eventually meant he was separated from his big sister. Who in the meantime, whilst waiting, had been inspecting some anatomically correct graffiti (according to her description) of various parts of the human anatomy, and was probably more Miss “Disgusted of Munich” about this, than the ordeal her poor baby brother had just been through.

Ice-cream is a great healer though, and we made our way back through the forest for various conversations with goats, big smelly boars, and tiny baby piglets, stopping to climb on various play spots here and there. And then suddenly, just as The Seven Year old was having her dress eaten by a goat, I turned to see this gorgeous thing, looking not unlike a seventies alpine “painting by numbers” scene, but only far more beautiful.  He even looks like he’s smiling! 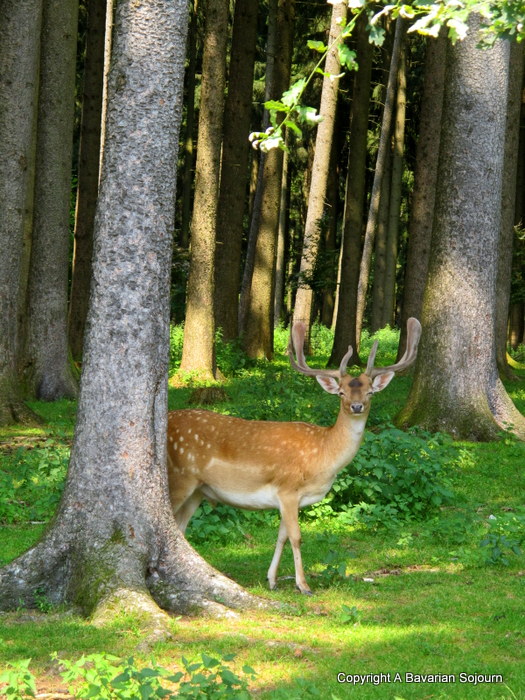 If this was a little staged “advert” with a tame deer to tempt us to come back, there really was no need… See you again soon Poing!