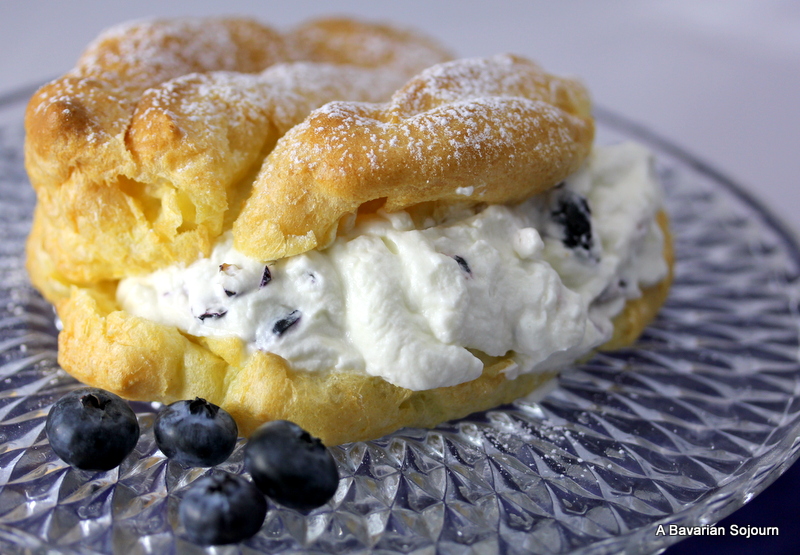 This has to be one of my favourite German Cakes.  I have to say German, as I don’t think I can  restrict it to Bavaria alone – but Bavaria is the only place I have enjoyed one (alright several) so far.   I think its origins are French however, but boy do they know how to make them here too!  En Francais I imagine this particular gateaux in its many guises to be called something elegant and descriptive.  Down here, it’s descriptive alright – windbeutel roughly translates as wind bag, which always makes me laugh.

There’s none of that French daintiness to worry about in terms of the cake itself either, here, when you can find them (and there are restaurants dedicated to them as we found with the very fabulous Berg Gasthof Almhuette near Garmisch) they are more often than not ENORMOUS, and if you are extra lucky, some of them are fashioned into elaborate swans and the like.    I say when you can find them, as I picture them as autumn cakes as apart from the specialist restaurants it seems to be the only time of year I have found them, but then again my head might have made that up…

Anyway, if you are partial to a lot of choux pastry, fruit and cream, then this is for you.   I promise it’s not as complicated as it might seem either.  This is truly a case of if I can make it, then so can you! And if you don’t like blueberries, then cherries are a typical filling here. Raspberries would work well too, as would strawberries.

Heat the oven to 200DegC.   In a heavy bottomed pan, bring the water to a boil.   Add the cubes of butter to the water to melt, then bring to a rolling boil.   Sift the flour, salt and sugar, and add to the pan.   Beat the dough until thickened, and it easily leaves the side of the pan clean.   Set aside to cool. Beat the four eggs in a separate bowl and stir in drop by drop to the cooled dough mixture until you get a consistency that isn’t too runny (you might not need to use all the eggs!) and that can easily be piped.     Spoon into a piping bag and leaving at least two inches between each windbeutel (to allow for rising) then pipe four ovals measuring roughly around 5×3 inches.   If you are not that greedy you might prefer to create six smaller windbeutel instead of four larger ones!

Place a small ovenproof dish of water in the bottom of the oven (to create a nice steamy environment for the choux pastry!) and then bake the windbeutel (WITHOUT OPENING THE OVEN) for 25-30 minutes).   Once baked, move to a cooling rack and split the windbeutel open to allow to cool in the middle whilst you get on with making the cream.

Whip the cream together with the icing sugar, the vanilla extract, and the chopped blueberries.  Only when the windbeutel are completely cool should you generously spoon the cream into the buns, dust with icing sugar, begrudgingly share with your family and stuff your face.   Enjoy!