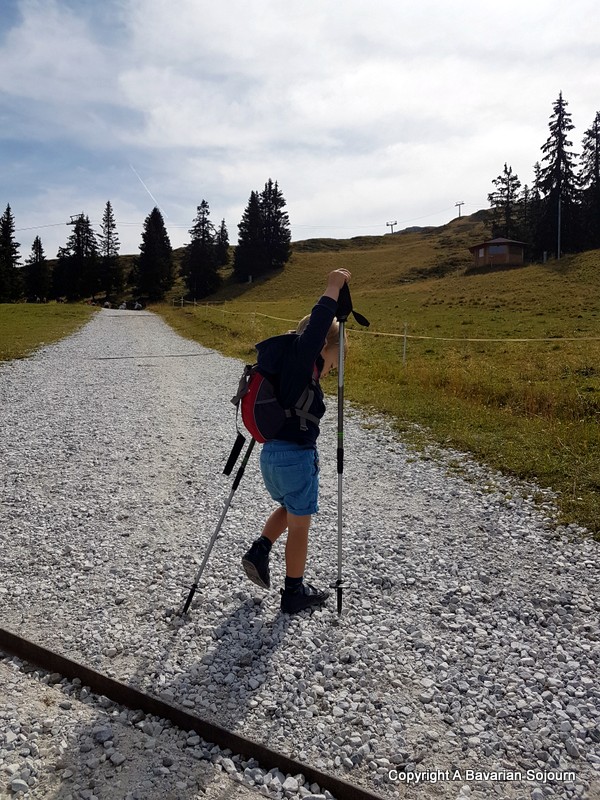 A common theme to my blog – picture heavy posts, this one being no exception.

Please note the constant “swapping” of walking pole possessors throughout these photographs, I promise you, we only have one pair. Mr R invested in them when the toddler first arrived as he wanted a bit more stability when wandering with a tiny person attached to his back.   I am not sure he has been able to use them himself much since the Toddler first learned to walk. They are a constant source of sibling arguments during our hikes (yes, even with ages gaps of 10 and 8 years!). For those of you thinking “just buy them their own”, if the poles were not constant whacking/tripping hazards with sharp pointed ends we might well consider it. We really don’t need to add any other danger factors to our mountain adventures believe me.

Whilst our older two are relatively expert hikers (you might appreciate this post if you would like yours to be as well!) well versed as they are in all that’s great about exploring the mountains (and open to our various methods of blackmail usually involving sweets and/or gingerbread) it hasn’t obviously always been that way. The fact is the alpine regions in this part of the world have secret weapons in getting children to grow to LOVE being in this kind of environment, and Racines (or Ratschings in its Austrian form) not far from where we stayed in Vipiteno has the perfect example (get the gondala up at Racines-Giovo/Ratschings-Jaufen).

MountainAdventureWorld is a mini hiking trail aimed specifically at kids.   It’s a great way to get them to complete an entire rundweg (round way) with a lot of learning chucked in along the way, and thanks to the fact that there’s also lots of fun to be had, reducing the chance of any moaning and groaning about walking (we have found similar alpine walks in Soll, Zell am See, Tegernsee, Schliersee and beyond by the way, they are not uncommon!).   The trail starts just steps from the gondola exit which is an added bonus.   It’s a flat track too so it’s buggy friendly.

The first stop on the route was BergWasser – a little alpine water fall to investigate with the chance to play stepping stones at the top and and change the flow of water with a few strategically placed pebbles.   Not wanting to get soaked before we had really started, we quickly headed to MurmeltierWelt (Marmot World) where a large scale  burrow has been created to explore and learn about, complete with tunnels to climb through.    Your small person is likely to end up popping out at the other end quite quickly so be prepared… 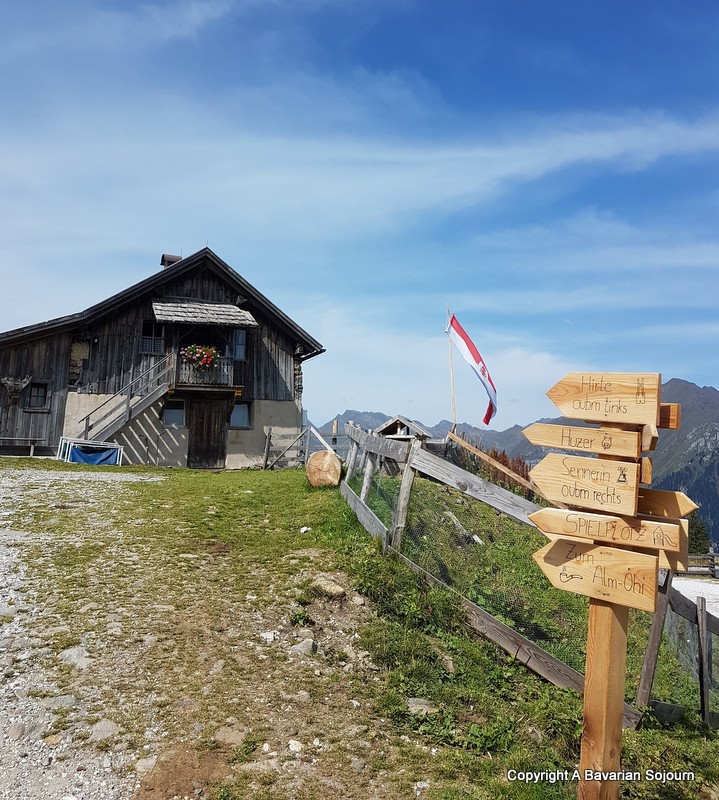 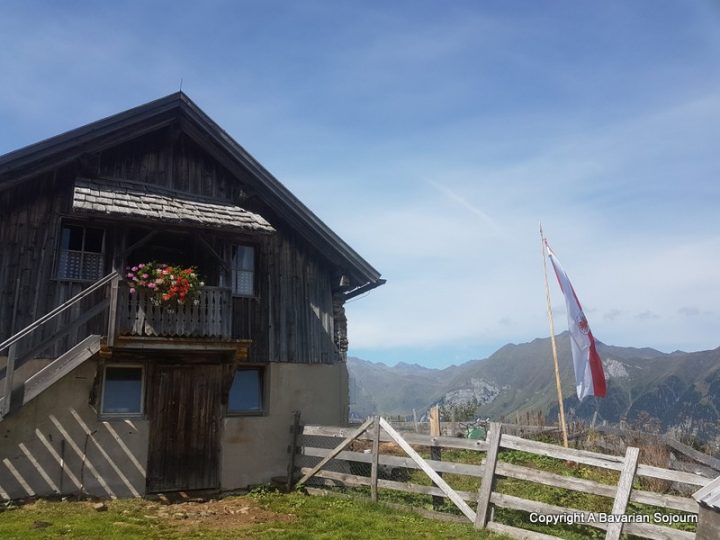 Next up on the trail is the KinderAlm (or Children’s mountain pasture) with plenty of farm animals to speak to, a sandpit and even a trampoline.  Adults will also appreciate this pit stop as it’s mostly in the surrounding grounds of the Rinneralm (open from June to beginning of October), and it’s an idyllic place to stop for a drink and a bite to eat whilst watching the children play.   Specialities of the house include impressive rustic cheese plates (look out for the local speciality – grey cheese, it’s interesting!) and of course schnitzel.

Refreshed it was time to check out the Wetter Kreuz on the far side of the crystalline lake.  The older two probably found this stop the most interesting as we learned about the superstitions associated with them, how most storms were blamed on demons and the like, and these crosses were put up to help prevent storms as long as enough prayers were said!!  I have to say it was probably my most favourite stop as well.    The views really were heavenly…

On to the next stop and a gallery of alpine pictures which was a little random if nothing else.    We preferred the World of Ants Station after this, which not only had an excellent climbing frame, but helped all of us learn how important these tiny insects are to alpine infrastructures and why we would be pretty stuck without them.

After a quick bash about on a giant musical instrument station (ruining the peace well and truly!) it was on next to Bog World which was far prettier than the name suggests.   You might not expect to find many peat bogs up a mountain, but there are plenty…  The boardwalk went down very well with the Toddler, and the wild flowers, birds and butterflies in this section were all beautiful.

Next up tree sculptures, followed by The Squirrel’s Eye View, which is a huge viewing platform, a little too high up and with too many stairs to lug the toddler up and down for my liking.     He much preferred the adjacent water feature with bare foot walking opportunities to be honest, as did my feet… 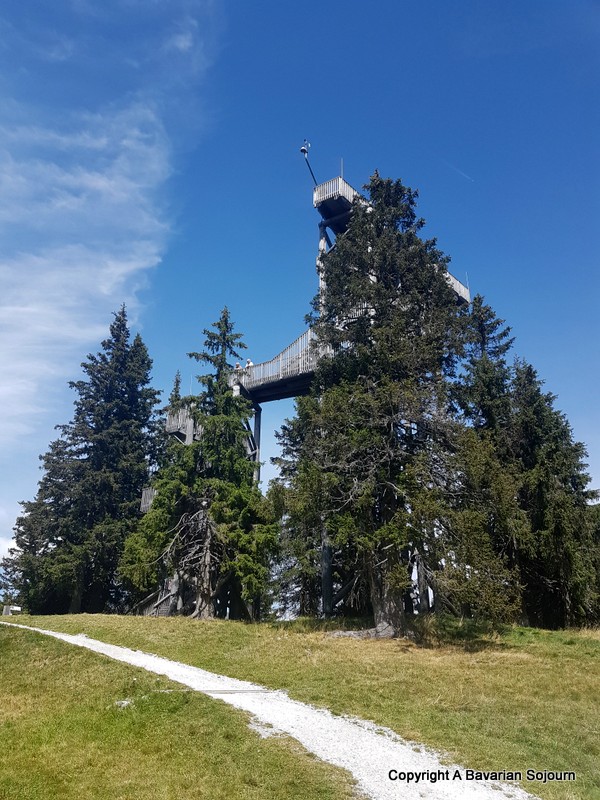 After this, just as the toddler was beginning to complain that he was tired, a forest playground opened up before us, complete with two of the tallest slides (be careful, kids really do fly down these!), and a wonderful little boat on a miniature lake with a rope system to help you get across that the Toddler spent a happy half an hour on (with the help of his big brother!). 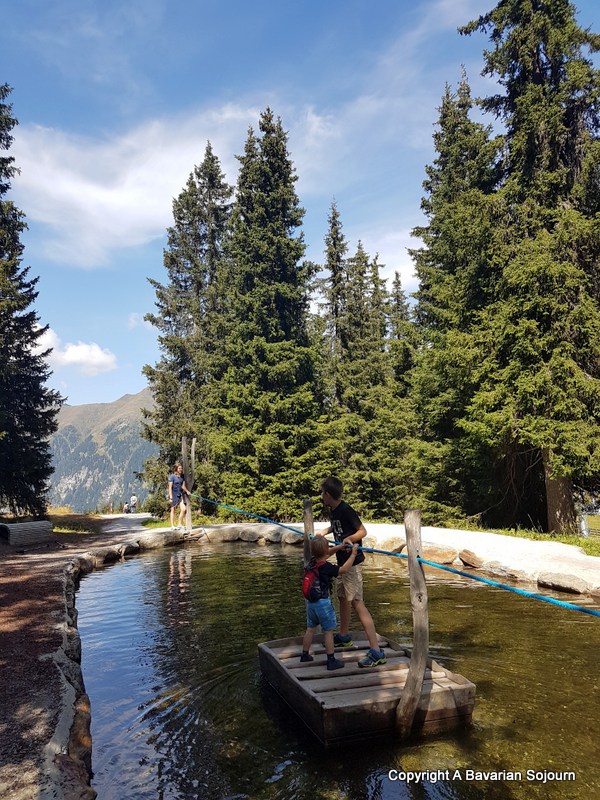 For those of you not that used to hiking, or if you’ve simply had enough of it for a day or so, this is a little route where you could easily spend the whole day without doing too much walking, but where your small people will be completely entertained in the most spectacular environment.    Nature really does the best playgrounds, but it helps a few man made ones be top notch too!

PS. the Bergrestaurant Rinneralm (different to the first Rinneralm mentioned in this post) is a great place to finish off your day before getting the gondola back down again. 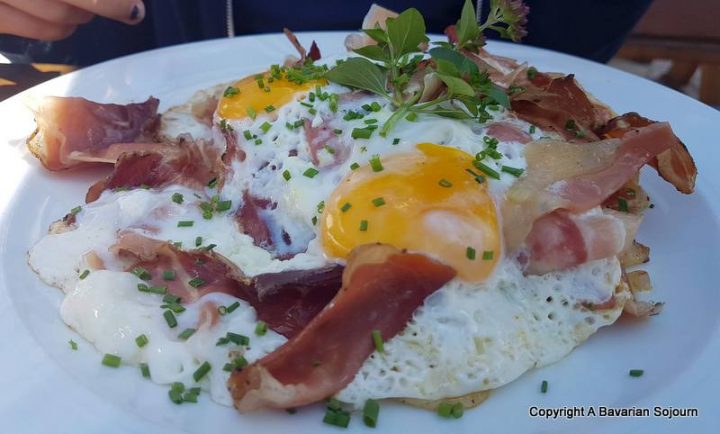 The grostl (pan of fried potatoes, bacon, eggs and mushrooms was excellent) and the puddings are really good if you are having to pay out on a few blackmails…