There are times when car journeys are memorable for their novelty value.  Take our recent trip for example, which saw us drive through four different countries in a little under six hours (it was possibly five, but I am not sure if we went through Liechtenstein!)

There are times when car journeys are memorable thanks to the amazing scenery – majestic and Alpine in this instance, (only this was to contain a lot more Alpine than expected…)!  It started off fairly relaxed as we made our way down through Bavaria, and crossed the border into Austria.   From there we made our way through Switzerland (a first time for all of us, we will be back!), before arriving in Italy where our final destination was Lake Como.

In Switzerland all of us began looking forward to the relatively easy mountain pass ahead, the Small People happy and quiet in the back with hours of Harry Potter CD’s to listen to.   At this point, the journey became all the more memorable for us, thanks to the stupid GPS deciding to take us on a different route, meaning that instead of the gentle and leisurely Saint Bernardino Mountain Pass, we ended up on something I later discovered is featured on various websites listing the most Dangerous Roads in the World – The Splugen Pass…   Forget appreciating Alpine scenery when the road ahead looks like this: 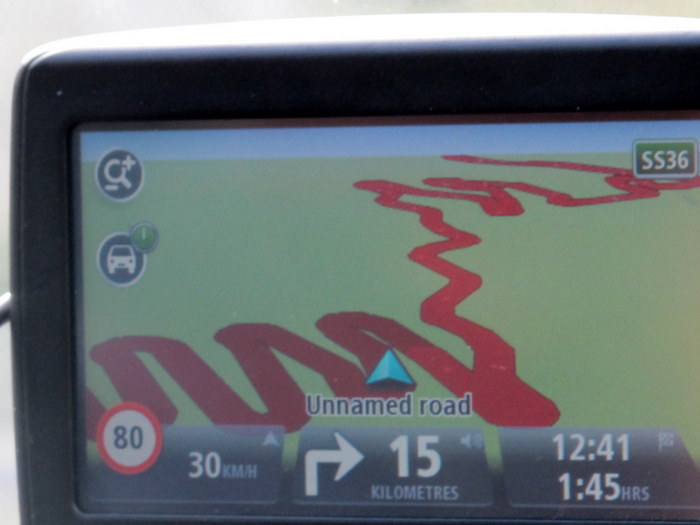 It might have been this journey that brought me to the conclusion that the more religious countries have the craziest drivers, because they don’t perhaps worry so much about dying prematurely – particularly one Italian driver, inches away from the back of our car screaming and gesticulating wildly at us to hurry up.    A little impossible on certain sections of the Splugen Pass where even a Formula One Driver with no oncoming traffic would struggle to manage the suggested 80mph, and we weren’t driving all that slowly either!   Anyway, Mr Impatient behind soon discovered that when necessary I do a pretty good line in gesticulating wildly and screaming back, and decided to give us a little more room for manoeuvre, which was very generous of him! 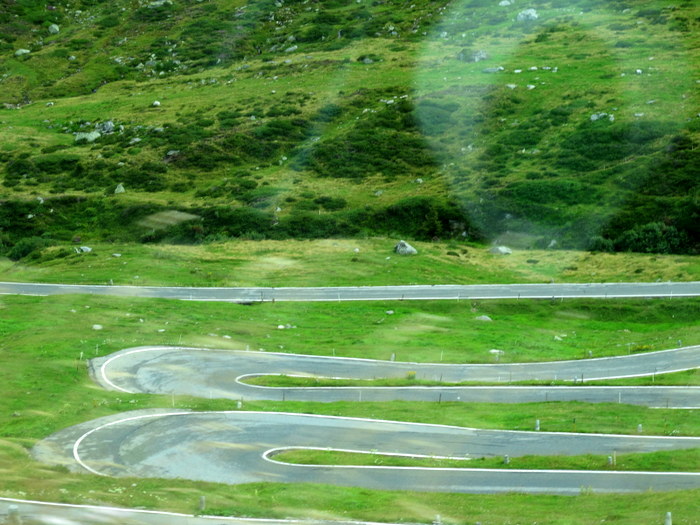 Meanwhile, my happy Harry Potter listening children were now turning various shades of green in the back thanks to the hair pin bends.      Soon enough the inevitable happened.    I congratulated myself on passing The Seven Year Old an empty paper coffee cup just in time, only to then have to balance it like a ship’s compass for what seemed like forever (as a further warning, it’s not easy to either stop or turn back on this route!).   Soon enough The Five Year old began to feel unwell too, but this time I wasn’t so fast, and there weren’t any more containers.    Some ten minutes later, his talented father managed to find a probably highly illegal (but safe) spot to park, whereupon all occupants were turfed out of the car and into an adjoining feild so we could deal with the obvious.    I did appreciate the (mostly) sympathetic stares of the much older camper van drivers as they passed our sorry sight, with looks ranging from “been there done that”, “poor children, poor parents”,  to “stupid mother why didn’t she give them travel sickness tablets, you’ll never get rid of that smell you know”  and the most obvious “why on earth did they come this way?”.  I may have wished a puking grandchild or two upon a couple of them.

Swiftly remembering the actions of or own parents once upon a time, we tipped bottles of water over the Small People and the inside of the car, stripped car seats, and raided suitcases for new clothes, and then continued along the road from Hell with windows open wide.    On the other side of the Pass we found a super-market where we bought air-freshener, washing powder, and most importantly travel sickness tablets!  All of which will remain in the car for future journeys.  As will a decent selection of Maps.  Real ones.

I am not sure it gets awarded the position of Worst Car Journey of My Life, that still goes to a taxi ride in Vietnam a few years ago, but believe me this car journey is up there with those we won’t forget in a hurry!