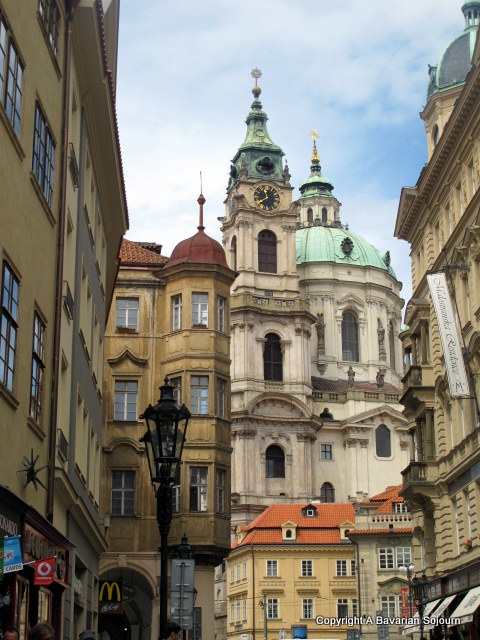 Prague has changed a lot since we first visited over ten years ago, when we were young, relatively care-free and without small accomplices.   It was also the middle of winter, and covered in snow.  Which might explain why I didn’t recognise a lot of the streets we revisited this time around.   The Small People couldn’t quite grasp that we had been there before (but without them), and even asked if we actually knew each other then.   I think we did, we were just a lot less sleep deprived and haggard looking!!

Of course, there was none of the late night bar, club and restaurant visits we enjoyed on our initial trip, and this time we chose not to stay centrally for tactical reasons, opting instead for the Aquapalace Hotel, a 15 minute drive from the city centre (thanks for the tip Mrs P.!) .    It is fantastic for families, and meant we could get our culture fix in the city during the day, with the bribe/promise of the hotel’s brilliant swimming pool complex when we got back.   The Small People loved it, and I have to say that everything else about the hotel was of a pretty high standard as well (I wasn’t paid for the mention, or asked to include it, I just like to give credit where its due!)!…

We spent our time in the city exploring, starting off in Wenceslas Square.  This has really been tidied up since we were last here, it now boasts plenty of big name shops, including (I was very pleased to note),  an M&S – and it has a food hall!!   As you can imagine, I might have spent quite a long time in there!After I had been extricated from the aisles of familiar cakes and biscuits, we continued through the beautiful Bohemian streets, past a plethora of sausage vans and Cuban bands, until we reached the rather famous clock on the Old Town Hall.    We didn’t stop to see it strike the hour this time, choosing instead to climb up it (where the photographs in my previous post were taken).  It’s well worth doing, but I would perhaps advise taking the lift up, and walking back down! 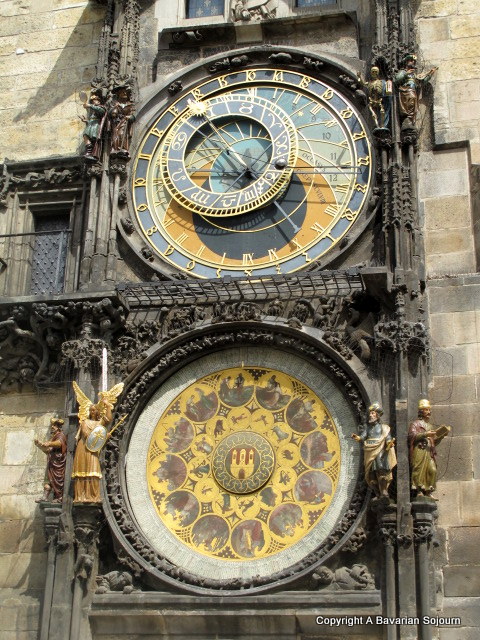 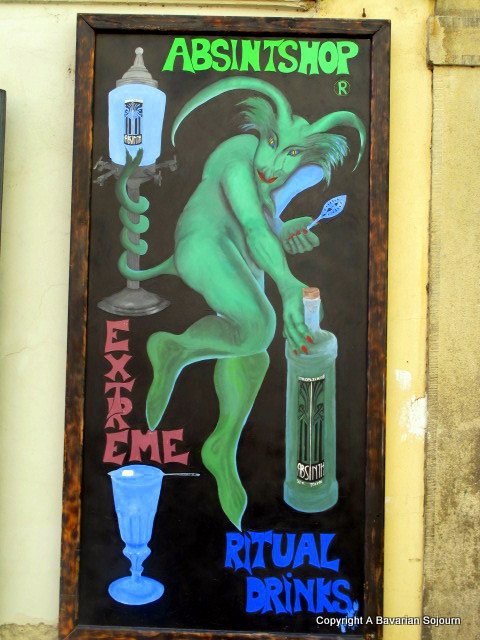 In Venice we spotted countless Winged Lions, here in Prague it was “Golden Things”, of which there are plenty.   The Small People liked the Absinthe signs everywhere too as they always featured some fairytale-like creatures.   They were a little upset that they couldn’t try the luridly green Absinthe ice-cream… Perhaps in a few years! 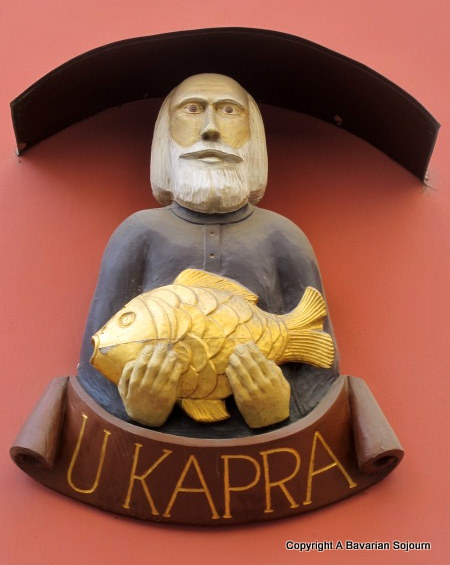 Charles Bridge hasn’t changed much!   It’s still as busy, but as charming as ever!  You do need to cross it to get to my absolute favourite part of the city though, Malá Strana…  Reminding me a little of Montmartre in Paris, it’s beautiful once you get to the top, and as if the view isn’t enough, it’s topped with a palace and spectacular castle as well.  By an amazing stroke of luck, we arrived just in time to see the Changing of the Guard at the palace (it takes place every hour, but the one at midday is apparently the most involved).  This kept The Small Boy more than happy, and more than a little envious of their swords! 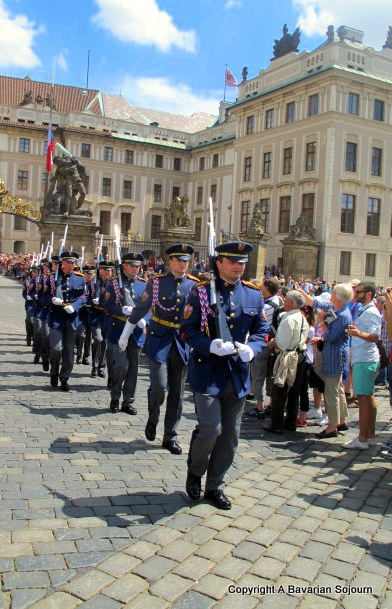 I have to say I was pleasantly surprised at how good the food is here now too, it definitely wasn’t worth writing home about all those years ago.  Yes, I might be partial to the odd dumpling, just not for breakfast, lunch AND dinner! 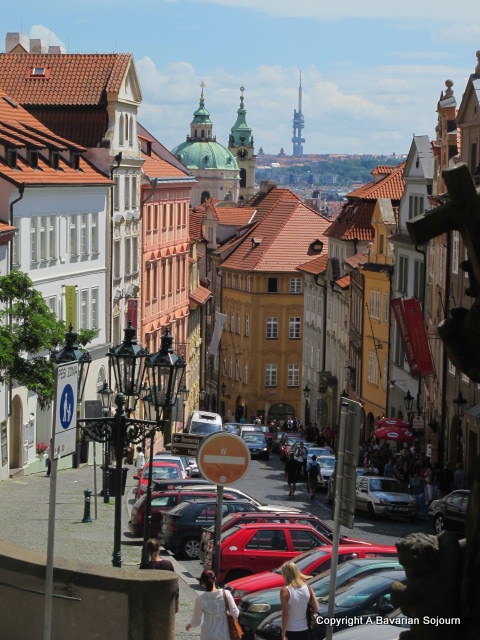 This visit was quite a last-minute affair, so we didn’t actually cram too much in.    The rest of our time was mostly spent quality testing ice cream,  listening to live music in squares, and watching street performers (watch out for the lone flamenco dancer!   I am not sure if he actually intends to be as hilarious as he is however, I had to retire behind a pillar out of fear of upsetting him as I honestly couldn’t contain my laughter anymore), and all this before retiring back to the hotel to make the most of the pool. 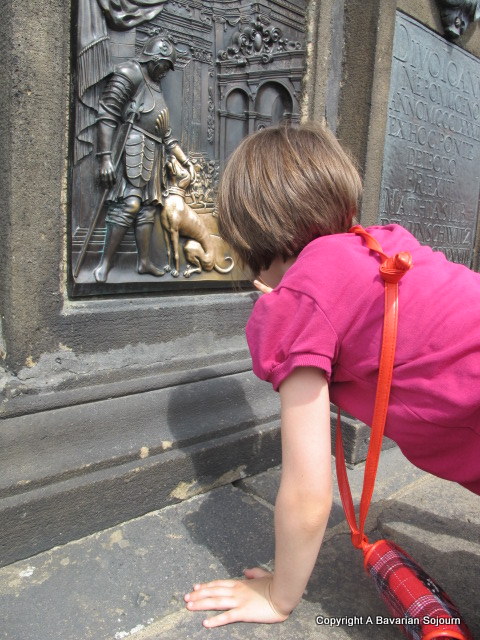 I made sure that we all paid a visit to  Jan Nepomucky’s dog before we left though.    If you touch this, it will grant you a wish, or ensure your return to Prague.  I am not sure if it’s both, but if it’s not then I am hoping for the latter, because I can’t wait to come back again, very very soon. 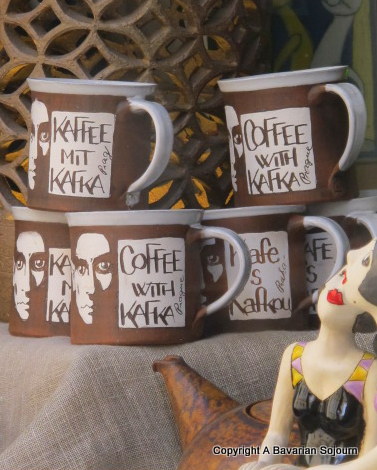