Back in our old pre-children SW London life, like many others our age, good food and eating out was a big deal. On many a hung over Saturday morning you would find us searching for edible treasure at local farmer’s markets, or if we were feeling particularly wealthy at the time – working our way through Borough Market’s amazing stalls.   I remember then conversations about how our future children would appreciate real food, and how, from an early age, they would learn what was considered acceptable behaviour (and not so acceptable behaviour) in a restaurant environment, so that we could carry on enjoying that side of life too!

Having undoubtedly failed many other parenting ambitions, this is one I like to think we have succeeded in – although I hasten to add it’s probably more through luck than anything else – but somehow we have ended up with two mini-gourmets who will eat just about anything (apart from baked beans in the case of the Small Girl (which is just odd) and marzipan in the case of the Small Boy (slightly more understandable)).   And yes, I am well aware that I have probably just cursed myself in terms of the future food appreciation of imminent Small Person No. 3…     However, I will admit to having slight concerns at how children would be accepted in a Michelin Star restaurant, as Luce d’Oro would be their very first during our recent stay at the very fabulous Schloss Elmau.

Despite how family friendly Schloss Elmau is, I can’t imagine that this particular restaurant gets altogether that many small guests, but I really needn’t have worried.  As soon as we walked through the door, they were treated as special guests, and although they may be adventurous eaters anyway, were completely thrilled when they were presented with a hand-picked menu aimed especially at them (and still managed to swipe plenty of bits and pieces from our “more advanced” plates)…

We started with a selection of music bread (so-called because it’s as thin as sheets of music, not because it sings or anything!) with various seed, herb and cheese toppings alongside beautiful alpine butter, and regional pork fat with crispy onions and herbs.   This beauty of this type of bread was that the Small People weren’t overly full before starting their meal as they hadn’t devoured an entire bread basket…   As we were presented with glasses of birthday champagne, the Small people got their own champagne flutes (slightly nerve-wracking!) filled with fizzy blackcurrant…

And, as they were served their own more child friendly amuse bouche of a delicate miniature schnitzel,  we were presented with something very Harry Potter-esque, a smoke-filled chamber with a scallop for Mr R (and something more baby friendly for me) accompanied by a tiny cracker topped with a curious (but good) vegetable sphere that burst with flavour once you bit into it. 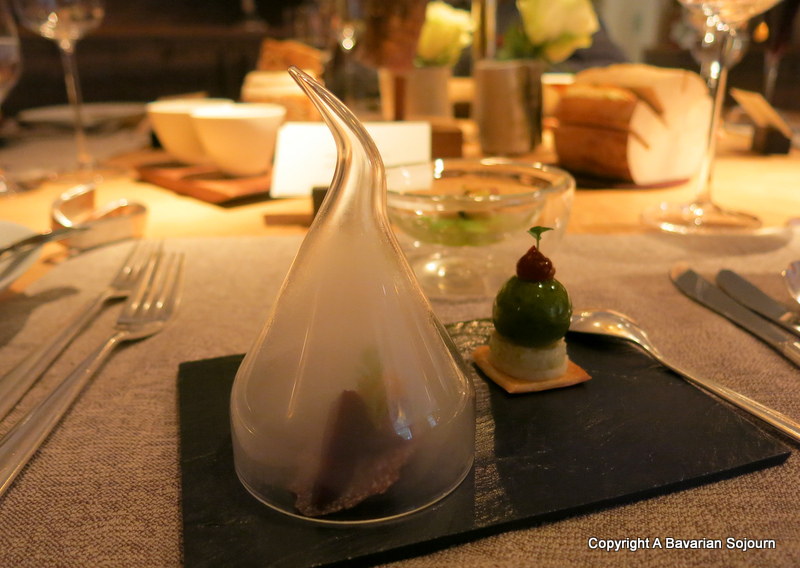 Next up for the grown ups was Norwegian Lobster with cauliflower and romaine lettuce in various forms – delicious.   The Small People were presented with roast chicken and beautifully cooked vegetables.  Before moving on to an inventive course of Kohlrabi with sweet corn and pearl barley.   Both Germany and Denmark love Kohlrabi, it’s not something we eat a lot of in the UK, but we should! 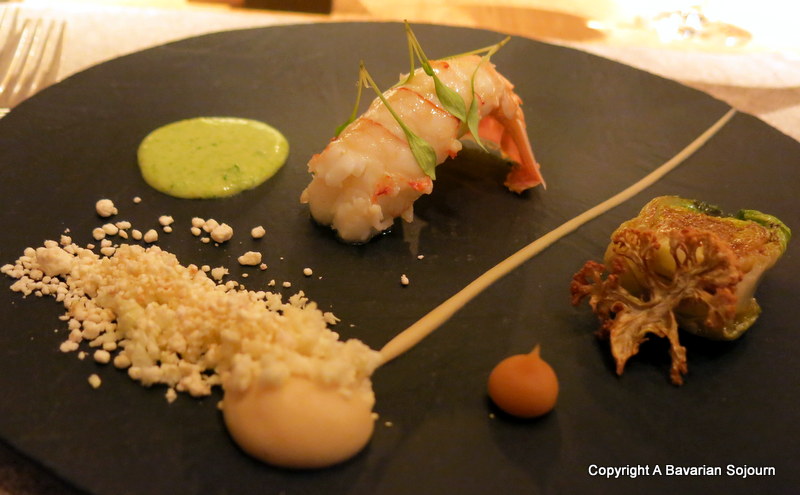 This was followed by a fillet of John Dory with Pepper and Chick Pea, before a final savoury course of Quail, Chanterelle Mushrooms and Dandelion.   I can’t say I have eaten Dandelion in a restaurant environment before, although I will admit to trying a leaf as a child when we had pet rabbits, just to see what all the fuss was about.    We ate the roots this time though, which roasted reminded me slightly of salsify… 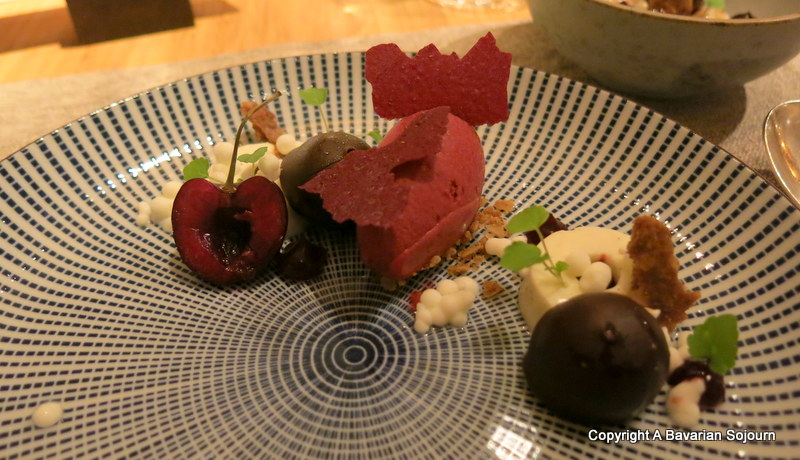 Having a very English sweet tooth, and a bit of a craving for cherries, I was more than happy with the dessert of Cherry, Rye and Sour milk, which consisted of cherries served several different ways – covered in chocolate, as a gel, sorbet and as a wafter, alongside sweet rye crackers, and tiny bubbles of iced milk, and milk panacotta.   The Small people were presented with magnificent bowls of spaghetti eis, complete with generous shavings of white chocolate parmesan!  Delicious!

And to string our experience out even longer, and ensure that we really did come away feeling like Augustus Gloops at the end of a special evening, we were presented with this amazing handmade selection of sweets to go with coffee. 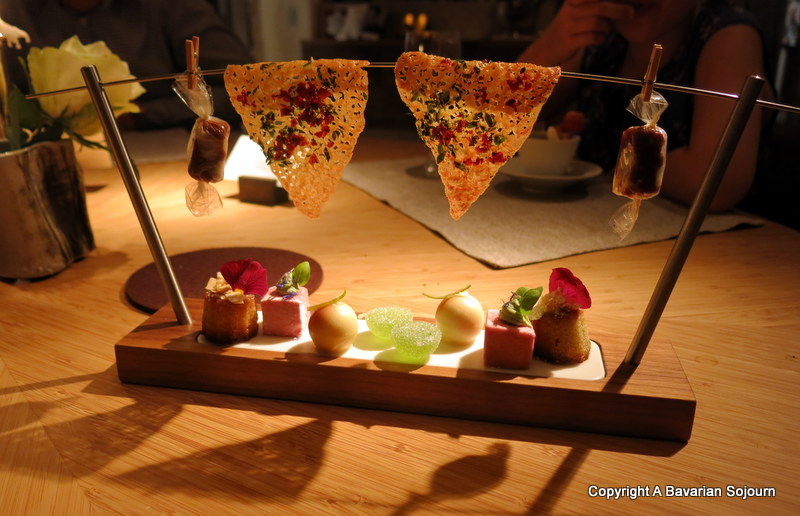 Should you be staying at Schloss Elmau, I really would recommend a meal here (with or without children).  The ambience can only be described as Alpine Chic with its cosy but stylish chalet style interior (also quite dark and atmospheric – hence the quality of the photos), and the service is impeccable (the Small People were thoroughly enchanted, and said they knew what it must feel like to be “royal people”!)…  My only teeny tiny complaint would be that certain food stuffs were assumed not wanted by moi as I am expecting, but actually, were perfectly fine to eat once I had enquired as to how they were cooked.   Everything else was just perfect.  You are also able to eat here should you not be resident, but do make sure you book well in advance.